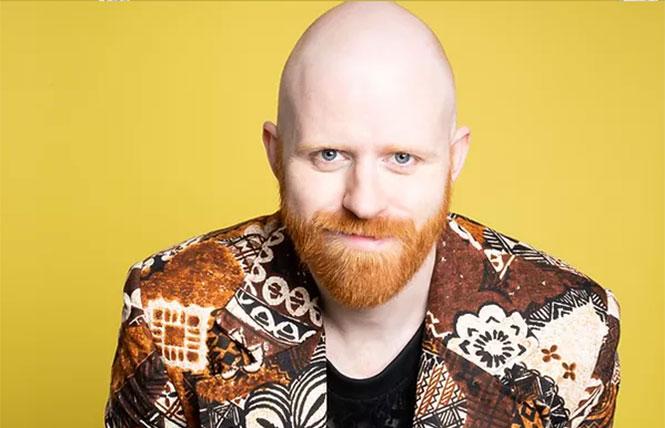 The young man runs through a graveyard in slow motion and enters a crypt. He opens a coffin. The body interred inside the coffin opens its eyes, bares its fangs and grabs the young man by the throat.

And so begins "Dark Shadows," a stand-alone music video produced by and starring Kyle Motsinger, an openly gay singer/songwriter based in New York City. Motsinger's video no doubt shocked some of the fan base of the original Dark Shadows, the 1960s TV series it pays homage to. In Motsinger's "Dark Shadows," both the vampire Barnabas Collins and his manservant Willie (Motsinger) are gay.

"I used to watch Dark Shadows reruns in high school on the SyFy Channel," Motsinger said in a Bay Area Reporter interview. "I loved how it felt like spooky, melodramatic theater. Halloween is a favorite holiday of mine and I thought it would be fun to write a Dark Shadows song that would be full of gothic romance. I decided to cast myself as the love interest of the vampire Barnabas Collins. Gay fans of the series loved my queer take on it." 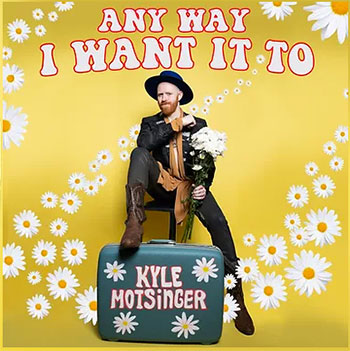 The adorable ginger is now taking his musical stylings far beyond the world of Dark Shadows with Any Way I Want It To, his just-released second album. With this eclectic collection of songs, Motsinger shows that he has quite a bit to say.

"My music sounds the way I want it to," he sings on the album's title track. "I've got much more to say than ooh, there are stories I need to tell."

"I want to tell stories that people relate to," he said. "I want to talk about important issues. Some stories I don't even know I'm going to tell until it becomes clear that I am called to. When I wrote the title track I had no idea we would be in the middle of a global pandemic when the album was released. I wrote several songs in quarantine about what was happening."

In "Believe What You Want," a melancholy rock number in which he is accompanied by a stirring electric guitar, Motsinger tells his listeners to "believe what you want, no matter if it's true ..."

"'Believe What You Want' is a response to the idea of fake news and the political turmoil we are in," he explained. "I think it's a writer's job to tell the stories that they see happening around them."

Originally from a small town in Central Illinois, Motsinger studied musical theatre at Western Illinois University. After moving to New York in 2011 to pursue a career in theatre, he originated a role in an off-Broadway children's musical and began performing in local cabarets. Though he had always composed, songwriting at first wasn't his primary focus. 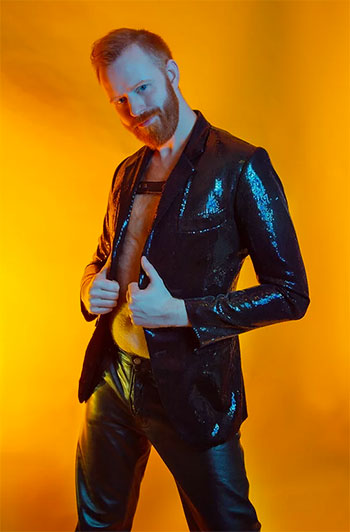 "Somewhere around 2015 I began to write introspective, piano-driven pop songs as a way of processing my growth as a person," he said. "I performed a full show of my original music at the Duplex Cabaret Theater (in New York) in Spring of 2016 and knew I belonged at the piano. I decided that night to make music my focus and I set out to record my first album. I released it a year later and have been releasing music and performing it around the city ever since."

Motsinger explained what draws him to write and perform music.

"For me it's about writing music that inspires people," he said. "I want to make people think and make people not feel alone. I sometimes write about difficult subject matter. I hope people can find comfort in knowing they aren't the only ones dealing with struggles. Mental health was a big focus of the first album. I also love writing upbeat anthems about owning who you are. My newest single, 'No Shame,' featuring Melody Betts is all about body positivity and loving yourself. My love of performing onstage translates to my live shows. Every song becomes a little mini-musical at the piano."

In the upbeat "No Shame" video, now posted at YouTube, Motsinger sings of not finding himself sexy. Amid a collage of shots of himself dancing to a disco beat in a pair of briefs in which he shows off his furry ginger body, Motsinger then proclaims that his body is beautiful. He is joined in the video by people with other body types.

"My parents were upset with my revealing outfits and my tendency to lose clothing in some burlesque inspired numbers," he said. "Sometimes I step away from the piano to perform the songs to a track at bars like the historic Stonewall Inn. My mother said I had 'no shame' and I told her that I didn't see why I needed to be ashamed of my body."

Motsinger clearly an artist with no shame about who he is, though in one song he admits to being told that he needs to be "less gay."

"A family member was worried I would be shutting out straight audiences," he explains. They wanted me to change the pronouns of who I was singing about. It came from a place of fear and I don't have any interest in indulging fear. It's harder for queer artists to be heard. It definitely makes it harder I think but I don't want to hide who I am. There will be someone who comes after me that needs me to be myself. I want them to look at what I did and be inspired to be their truest self."

Any Way I Want it To, Kyle Motsinger's new album, is now available on digital platforms like iTunes and Spotify and elsewhere. A limited number of physical CDs will eventually be issued.