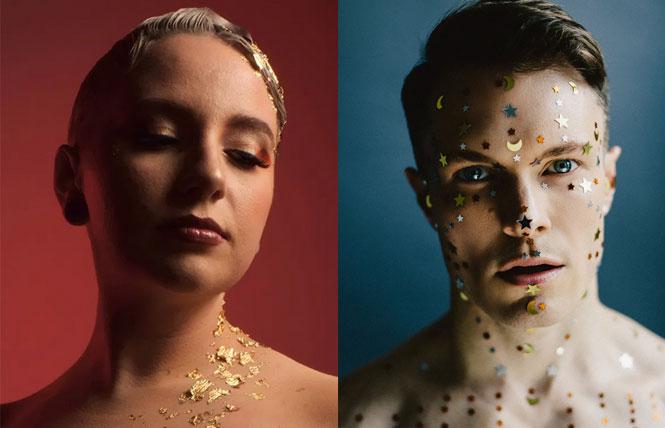 There are likely any number of ways with which you may be familiar with the newly out (welcome to the club!) singer/songwriter Maria McKee. Perhaps you recognize her powerful and distinctive voice from when she was lead vocalist in cowpunk (read: pre-alternative country) band Lone Justice who had a couple of minor mid-`80s hits ("Ways to be Wicked" and "Shelter").

McKee also had a decent solo career (and hit single "Show Me Heaven"), with both major label and independent releases. Feargal Sharkey (of The Undertones fame) had a 1985 hit with her song "A Good Heart," and McKee also had a tune ("If Love Is A Red Dress") on the popular Pulp Fiction soundtrack.

Gay men of a certain age may also recall that Bette Midler recorded a pair of McKee songs ("To Deserve You" and "The Last Time") on her 1995 Bette of Roses album. Now that we got the (re)introduction out of the way, we can praise La Vita Nuova (American Fire), McKee's new album, her first in more than a dozen years.

Fittingly translated as "new life," the 14 songs on the album have more in common with her early 21st-century discs than those that preceded them. Theatrical, almost operatic, McKee wails and belts like the grandest of divas, creating a modern-day cabaret style and sound. Her voice is as strong and expressive as ever and there are no clunkers to be found, with the title track as well as "Right Down to the Heart of London," "The Last Boy," "I Never Asked," "Effigy of Salt" and "I Just Want to Know That You're All Right," deserving of singling out.

If McKee is working in a thoroughly modern cabaret vein, then gay Aussie Kim David Smith is singing old school cabaret in which the "T" isn't silent, but emphasized, on Live at Joe's Pub. There's something ironic in listening to the song selection of mostly Brecht/Weil songs as neo-Nazis are marching through the streets with Trump's blessing. Nevertheless, Smith gives them all he's got and that's saying something.

Young (23), queer, Scottish-Canadian singer/songwriter Evangeline Gentle makes an indelible impression with their eponymous Sonic Unyon debut album. Striking the right balance between personal love songs ("Sundays," "Long Time Love," "Neither of Us") and universal observations ("Ordinary People," The Strongest People Have Tender Hearts"). "Even If," the lightly twang-tinged tune deserves the attention of country music lovers of all stripes.

Bay Area-based lesbian singer/songwriter Rachel Garlin has not been sitting idle during the pandemic. In addition to releasing a new Julie Wolf-produced album, Mondegreens, she performs weekly Sidewalk Sessions, live shows from the garage of her Noe Valley home. She wrote the score for Out There, Thibault Mathieu's augmented-reality short film (featuring vocals by Vanessa Williams). Oh, and her cover of Don Henley's "Boys of Summer" from Mondegreens is respectful and respectable.

Pansexuality! All the kids are doing it! Pansexual singer/songwriter and longtime side-woman Bonnie Whitmore takes a daring approach to Americana (especially when it comes to subject matter) on her new album, Last Will & Testatment (Aviatrix). Whitmore kicks it off with the bruising blues of the title cut, a song about losing someone to suicide. Also worth mentioning is "Asked For It," a strong response to sexual assault. Whitmore co-wrote the infectious song "Fine" with Mary Gauthier's partner Jaime Harris, making her another powerful queer voice worth exploring.

Trans singer/songwriter Cidny Bullens may be another familiar performer to some. Bullens, who came out as trans in 2012, previously had a recording career as Cindy Bullens, putting out eight albums, including the acclaimed 1999 release Somewhere Between Earth and Heaven about the death of their daughter Jessie. Walkin' Through This World (Blue Lobster), Bullen's debut recording as Cidny, is another powerful personal statement. The title track, "Little Pieces," "The Gender Line," "Call Me By My Name" and "Healing the Break" are all meaningful, necessary and welcome additions to the growing playlist of songs about the trans experience.

The Lawrence Arms and Jonathan Richman

Queer subject matter isn't limited to those who identify as members of the community. Chicago emo trio The Lawrence Arms hint at a message of coexistence in the song "Pigeons and Spies" from its new album, Skeleton Coast (Epitaph). The verse goes as follows, "You are the locker room. I am the queer/keenly aware that you don't like that I'm here./All we have in common is that you hate me./All we have in common is that we'll both be."

Something Nice I Want to Tell You by Seattle underground-supergroup The Demon Rind (led by Kwab Eugene Copeland) features guest vocals by queer artist Lance Moore on "Everywhere Everyone," a song about remaining open to the various possibilities of attraction.

Long before The Lawrence Arms or The Demon Rind ventured into our territory, music legend Jonathan Richman came dancing. The eternally brilliant "I Was Dancing in the Lesbian Bar," from Richman's 1992 lo-fi masterwork I, Jonathan (Craft/Rounder), making its vinyl debut, remains a classic in his considerable repertoire. Moving from "uptight" to out of sight, from "stop and stare" to "laissez-faire," the song has a great beat, you can dance to it, and the message is as delightful as it is effective. Other standout tracks include "Velvet Underground" (a tribute to the band of the same name), the warm and sunny "That Summer Feeling," and the spoken-word/sung walking tour "Twilight in Boston."