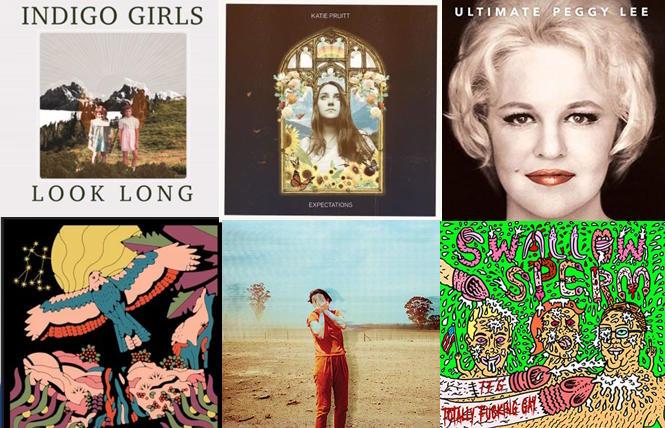 It's been 35 years since Indigo Girls released their first single (feel old yet?). By 1987 they were signed to a major label and released their full-length debut album. However, it wasn't until the Indigo Girls eponymous 1989 album (the one with "Closer to Fine" on it) that they fully connected with the people who would become their devoted audience.

Arriving five years after the Indigo Girls' previous studio album, Look Long (Rounder) continues the musical tradition that Amy Ray and Emily Saliers established all those years ago. The successful formula includes the duo's blend of modern Americana pop on songs including the title tune, "Country Radio," "When We Were Writers" and "Sorrow and Joy," and memorable rockers such as "Change My Heart," "Shit Kickin'" and "Favorite Flavor," all with an eye towards social commentary.

You'll be hard-pressed to find an album more gorgeous than Our Two Skins (Jagjaguwar), the second by queer singer/songwriter Gordi (aka Sophia Payten), this year. Soul-baring album opener "Aeroplane Bathroom" alone, about getting your "shit together" in the tightest of spaces, is simply exquisite. The same can be said for "Radiator" (which recalls early Rickie Lee Jones), "Look Like You" and "Volcanic."

Even when she picks up the pace, as she does on "Free Association," "Unready," "Sandwiches" and "Extraordinary Life," Gordi keeps the gorgeous in her sights. Be sure to listen for the opening and closing of the door that brackets the album.

Expectations (Rounder), the debut album by young, lesbian singer/songwriter Katie Pruitt, is an admirable introduction to a talented artist. Fans of Brandi Carlile and Becca Mancari will connect with Pruitt's extraordinary and commanding vocal abilities as well as her way to draw in the listener with her personal lyric style. This is especially the case with the amazing "Georgia" ("There is a place past the Georgia pines/With people who welcome you with an open mind") as well as "Normal," "Loving Her" and "It's Always Been You."

Laura Lee, the out bassist in Khruangbin, continues to bring the flashback funk on Mordechai (Dead Oceans), the band's new album. "Time (You and I)" is a perfect recreation of seventies disco, something that would have packed the dancefloor at the Paradise Garage in the wee small hours of the morning. "Pelota" adds a distinctive Latin groove to the irresistible dance moves. "So We Won't Forget," "Connaissais De Face" and "If There Is No Question" should also keep listeners on their feet and dancing, but at a different pace.

"Plenty of Gays Live in New York State" is sure to ruffle some feathers ("guys from New Jersey are too fat/Guys from Connecticut are too snooty/They refuse to give up the booty"). No one is safe, including men in Oklahoma and "Hollywood leading men," in "I Don't Know Anyone Who is Straight." Others getting called out include Morgan Freeman ("Butt Sex with Morgan Freeman") and Marilyn Manson ("Marilyn Manson I Will Suck Your Dick").

Peggy Lee was totally straight, but she was adored by the gays. Legendary female impersonator Jim Bailey included Lee in his act and gay writer James Gavin wrote her well-received bio Is That All There Is? Gay icon Madonna even covered one of Lee's trademark numbers, "Fever."

Born Norma Deloris Egstrom, Lee's centennial is being celebrated in 2020 (she died in 2002) and one of the best ways to get (re)acquainted is the newly released 22-track Ultimate Peggy Lee (Capitol/UMe). In addition to being a singular interpreter of other people's songs, such as the aforementioned "Fever," as well as "I'm A Woman," "Black Coffee," "Is That All There Is?," "The Folks Who Live on the Hill," and "Heart" (from Damn Yankees), Lee was also a sensational songwriter. Lee co-compositions "I Love Spending Time With You," "I Don't Know Enough About You," "It's Good Day," "He's A Tramp" (from Disney's Lady and the Tramp) and "Things Are Swingin'," also included here go a long way in emphasizing that fact.

Q-Music: Pride inside — a queer quarantine playlist
Sign up!