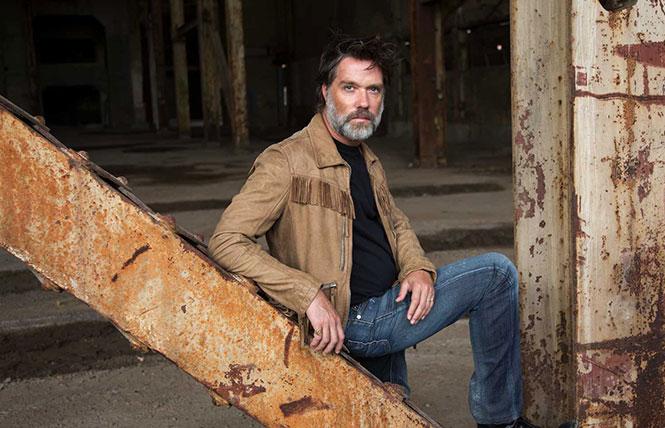 For those who have been counting (and patiently waiting), it's been 12 (!) years since Rufus Wainwright has released an album of original pop music. Rest assured that with Unfollow the Rules (BMG), Wainwright doesn't disappoint. 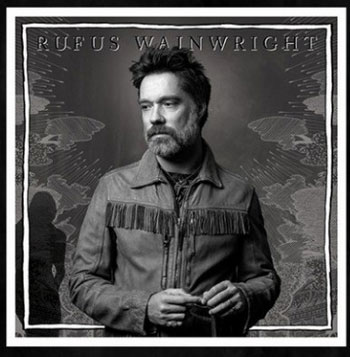 Album opener "Trouble In Paradise," which shares a kinship with "Going To A Town" (from 2007's Release The Stars), sets the tone with its political voice, something which echoes in "Only the People That Love." Wainwright also doesn't skimp on the operatic excesses on the dramatic "Early Morning Madness" and "My Little You." But there is also a hopefulness (and even humor) interwoven throughout on songs such as "You Ain't Big," "Peaceful Afternoon," "Damsel in Distress" and "Alone Time." Rufus was gracious enough to answer a few questions in advance of the release of Unfollow the Rules.

Gregg Shapiro: Work on 'Unfollow the Rules,' which is being released in July 2020, began in 2018. Is that about the average length of time for you when it comes to making a record or if this one took longer, why is that the case?

Rufus Wainwright: This one took longer. I had worked for this period of time years ago on my early albums. With this one I returned to that concept. I will say that we weren't working the whole time. We did it in spurts. I think if you actually put all the time that was spent consecutively, it didn't take anywhere near as long as that. That being said, I'm a strong believer in walking away from a project for a little bit to get a fresh sense of what it needs and coming back to it. This album had a lot of that; going away for a few months and then coming back. I think that really helped a lot. 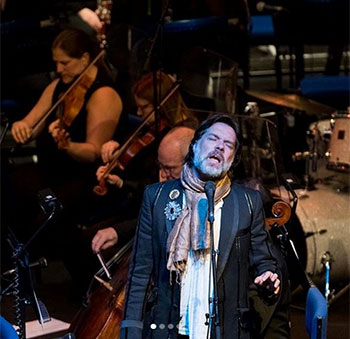 Rufus Wainwright's last live show in 2020 at the Hastings Piano Fest, with the Royal Philharmonic Orchestra

What was it like working with producer and musician Mitchell Froom on 'Unfollow the Rules?'

That is one of the great tales of my life. On an artistic level he was perfect. On the one hand, he respected my work and is a fan and wanted to fight for the songs and so forth. But on the other hand, he wasn't afraid to really question me and give me his honest opinion about what was going on musically. It was this nice combination of caring and also curt [laughs]. But then on top of all of that, he's a lovely guy; a true mensch. And we're very good friends now, which is the best thing that can happen.

You said in a YouTube video that your daughter Viva came up with the album's title, 'Unfollow the Rules.' Was the titular song inspired by the title or vice versa?

Many years ago, she expressed that concept one afternoon and I jotted it down. "Daddy, I want to unfollow the rules." Then it became a lyric in a song and then it became a song itself. Now, it's the name of the record. That happened in a very organic way and I'm not quite sure which came first, the chicken or the egg at this point, in terms of how this has all come about. But I will say that, like the album taking so long, having these big breaks in between, that song is similar. I kind of finished a couple little sections here and there, then I would go away and come back and hammer away at lyrics. 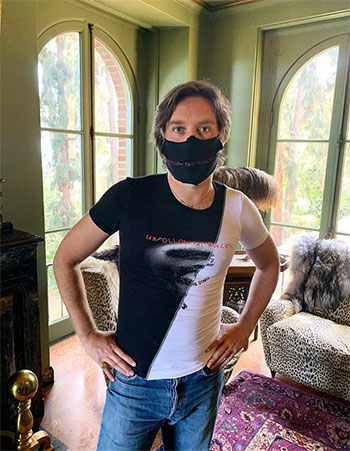 Rufus Wainwright in his album-branded mask and T-shirt.

In the eight years between 'Unfollow the Rules' and 'Out of the Game,' albums of original pop songs, the world has changed considerably, especially in light of the 2016 US election. Am I on the right track when I say that the songs "Hatred" and "Only the People That Love" sound like musical responses to the current state of things in Trump world?

Yeah! You picked the right songs. Arguably, one could even say "Trouble in Paradise," the opening track, is indicative of the era we live in. "Hatred" I wrote in a period of my life where I was just up against the wall somewhat concerning an adult issue. Things that we all go through as human beings, whether it's illness or going to court or losing a loved one.

It was one of those big moments in life and I was filled with wrath. I needed to do something with that wrath in order to win the battle and not destroy myself in the process. I do feel like we're at a similar juncture right now with the election. People are going to be angry no matter what. There's no getting rid of that, so we have to then channel that energy into the appropriate weapons [laughs] and come out better by the end. I don't think it's going to be easy, and it's quite frightening, actually. But human history is laced with troubled times, we've been here before in the world. You have to go through this to get to a better place. "Only the People That Love" is eventually the answer to the question. Love will conquer all and that is your best bet in surviving this tricky period.

I have a feeling that there are probably going to be gay men of a certain age who will hear Sarah Siddons get name-checked in "Romantical Man" and know who she was.

How did an 18th-century actress find her way into this song?

I've been a fan of All About Eve for many years. She briefly appears in that movie. Let's just say I wasn't deeply knowledgeable of that whole concept until I ran into her grave. That's where I got the idea. I was walking through London and I saw this amazing statue of her in Paddington Green. Then I went and read up on her and fell into this rabbit hole [laughs] of the 18th century and Bette Davis movies [laughs]. I'm happy to bring people along on this journey.

Does Stephen Sondheim know about the song "This One's For The Ladies (That Lunge)", and if so, what does he think of the semi-tribute?

You know what? I don't know! That's a good idea. I'll send it to him. I met him a couple of times and we've hung out a bit. I should send him a link. 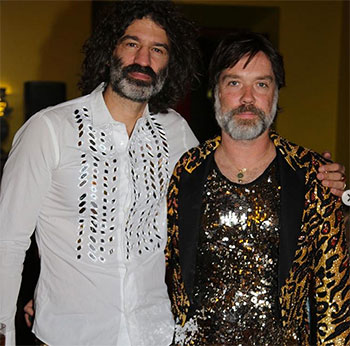 Rufus Wainwright with his husband Jorn Weisbrodt in 2019

In "Peaceful Afternoon," an anniversary song for your husband Jorn (Weisbrodt), you sing the line "between sex and death and trying to keep the kitchen clean," which may be the most romantic summation of marriage I've ever heard, and I've been with my husband for almost 28 years. What does Jorn think of the song?

He loves it. It is now kind of part of our marriage that I write a song about him for every album of original songs I release. It's been that way for the last three or four records, so it's not a new thing. Thankfully, they're all love songs [laughs] and they seem to grow in power and strength and beauty, so it's worth pontificating on.

In the midst of all the seriousness, there is also humor, as in the song "You Ain't Big." What was the inspiration for that song and are you prepared to hear from the people of Lawrence, Kansas, as well as Southern Pennsylvania, Eastern California and Western New York state?

[Laughs] Lawrence, I think, is a veiled compliment. The whole premise of the song is that you're not really a huge celebrity until you've been amongst the plebeians of America, which is an interesting place, to say the least. Lawrence has always been a bit of an oasis in the Midwest whenever I've gone there. I can kind of breathe, finally. I don't feel as tense as I do in the rest of the country. As far as Southern Pennsylvania, Eastern California and Western New York (are concerned), those are particular jungles, shall we say [laughs].

Having seen you perform in concert many times over the years, I was wondering how you are adjusting to the new normal of canceled and rescheduled concert tours during the pandemic?

I have to say I am one of the luckiest artists around because I, thankfully over the last 10 years, really made great overtures to the opera world. I went out there and hammered away at this crazy idea of being accepted into the classical pantheon. I will never know if that's happened until I am dead for about 100 years. That being said, what's great about it now is that I must've had some effect because I do have a lot of commissions. They take two or three years to compose. The calendar is much wider in the classical world than in the pop world. So, there's a ton of work that I could sit down and work on because of that little exit strategy that I had at one point.