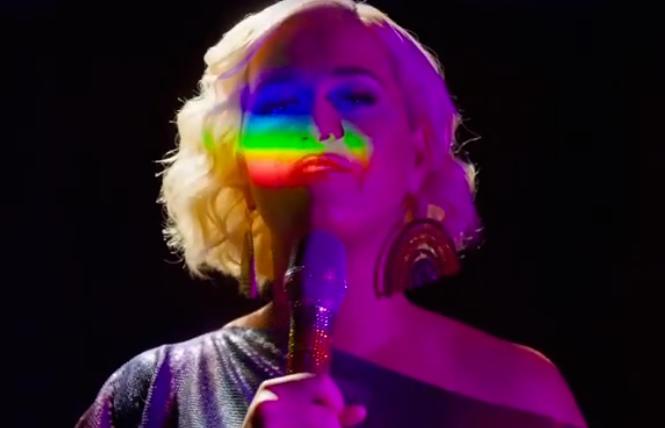 Pride Live, a social advocacy and community engagement organization for the LGBTQ community, held its third annual Stonewall Day on June 26. The global campaign's goal was to elevate awareness and support for the Stonewall legacy and the continuing fight for full LGBTQ equality.

Launched in 2018, Stonewall Day is a national day of awareness to commemorate the anniversary of the 1969 Stonewall riots.

While Pride celebrations are usually joyous affairs, the livestream took on a positive but serious tone, given the fact that America is grappling not only with a pandemic but international protests against police brutality that inordinately affects Black citizens.

"I really do believe that you are the future," Kesha said prior to a performance of her song "Rainbow." "You inspire me with your energy, your heart, your voices and the way you take action."

In Taylor Swift's two-minute Twitter video the singer said, "We still have so far to go in terms of equality and protections for LGBTQ people."

Singer Demi Lovato, added her comments in a Twitter video: "as a member of the Queer community, I feel so much pride joining you to celebrate Stonewall Day, a day we celebrate to honor and celebrate the spirit of rebellion. We have so much to celebrate, and to continue the conversation of equality."

"COVID-19, and the recent events that have placed a national and global spotlight on the need for fair and equal treatment for all people, has impacted so many around the world and the LGBTQ community has not been immune," stated Yvette C. Burton, Ph.D., president of the Pride Live board of directors.

"This has resulted in vital and life-saving LGBTQ organizations having to severely amend their budgets and programs. Our hopes are Stonewall Day can assist our beneficiaries in continuing their work and service to the community."