Sold-out concerts before the halls closed 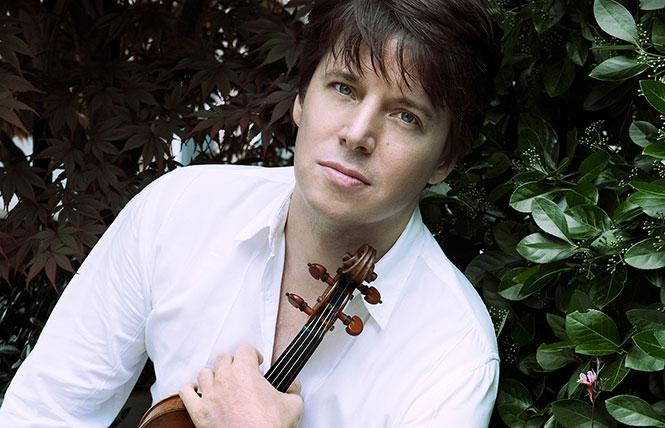 A traveling violin superstar and two young singers on the rise filled local concert halls recently with sold-out crowds undeterred by worries about coronavirus. Joshua Bell and the Academy of St. Martin in the Fields packed Davies Symphony Hall. Tenor Zhengyi Bai and mezzo-soprano Simone McIntosh earned a standing ovation at Taube Atrium Theater in their outstanding Schwabacher Recital Series concert. Two days later, on March 6, Mayor London Breed announced that War Memorial Performing Arts Center venues, including DSH, would be closed for all public events for the next two weeks in an effort to reduce the spread of COVID-19.

Since 2015, Merola Opera Program has been the sole sponsor of three of the four annual Schwabacher Recitals. Late Bay Area singer, scholar, and teacher James H. Schwabacher permanently endowed the concerts, which celebrate 37 seasons. Merola Opera Program 2018 participants and 2019 Adler Fellows Simone McIntosh (Vancouver, Canada) and Zhengyi Bai (Linyi, Shandong, China) last appeared together in "The Future Is Now: 2019 Adler Fellows Concert." McIntosh was brilliant in an excerpt from Mozart's "Lucio Silla"; Bai had the unenviable task of opening the concert with a difficult aria requiring a stratospheric high note. He made it with ease. Their amusing duet from Rossini's "Le comte Ory" drew appreciative laughter and applause. The recital bill was divided into two parts, each spotlighting the individual singer's unique talent. A final duet encore would have been nice, but it was an exceptionally full and adventurous program.

SF Opera General Director Matthew Shilvock was on hand to emcee Zhengyi Bai's opening set and affectionately announce the retirement at the close of 2020 of Sheri Greenawald, beloved 18-year Director of SF Opera Center and Artistic Director of Merola Opera Program. Greenawald's legacy is celebrated with every performance by a Merolini, past or present.

Young tenor Bai made his SFO debut in "Carmen" last season, and made cameo appearances in "Manon Lescaut." His powerful voice is strong and his presentation sturdy. Opening with "Selections from Sei Ariette" by Vincenzo Bellini, he immediately established his passionate personality. His singing was less nuanced than robust, but four brief arias helped warm and loosen his voice. In "Vier Lieder, Opus 27" by Richard Strauss, Bai showed subtle feeling and rich tone.

The unmistakable triumph belonged to Simone McIntosh. Her choice of repertoire was ambitious, and her performance flawless. Olivier Messiaen's "Harawi" is an almost ritualistic work that exquisitely combines his love of birdsong, mysterious ethnomusicology, and ability to hear colors (synesthesia). Entering barefoot in a long flowing shift, with excellent pianist Robert Mollicone, also in white and without shoes, McIntosh created and maintained a character throughout. By turns temptress, priestess, and yearning lover, she imbued the music with otherworldly fascination. Messiaen's infrequently heard masterwork was fully realized. The standing ovation was deserved.

The week before, famed violinist Joshua Bell, appearing as director and soloist of the equally renowned Academy of St. Martin in the Fields (ASMF), got listeners at Davies Hall to their feet twice (quelle surprise!). The concert spotlighted the virtuoso in Paganini's crazily difficult Violin Concerto No. 1, featuring Bell's own original cadenza. The borderline kitschy piece was probably included because Bell can still toss it off with staggering nonchalance. He did shred his bow during the first movement, which prompted a funny aside to the audience, "Anyone have a horse?" Every note registered as it went in one ear and out the other, and, while some passages seemed sharp, there was no denying the ultimate effect. In middle age, eternally youthful Joshua Bell still has the goods.

The second half of the program was given to Brahms' Symphony No. 4 in Bell's marvelously full-bodied interpretation, conducted from his seat as concertmaster. SFS Conductor Laureate Herbert Blomstedt brought us his recognized expertise with the Brahms Fourth during his annual visit last month. Is it disloyal admitting Joshua Bell and the seasoned ASMF offered fresh admiration for a classic score?