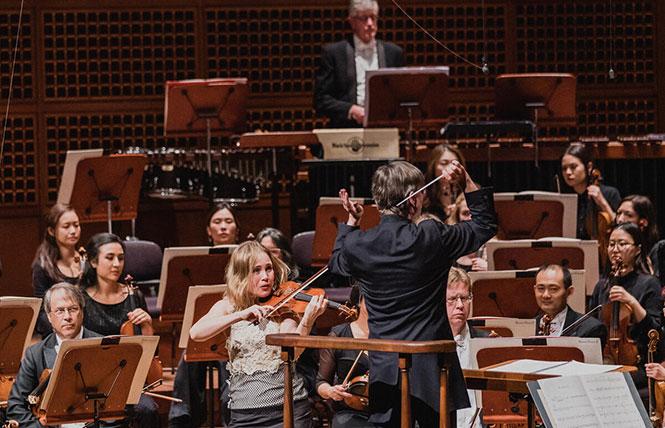 Hard on the heels of the recent announcement of Esa-Pekka Salonen's first season with the San Francisco Symphony, the Music Director Designate commenced two weeks of guest appearances at Davies Symphony Hall. The fortnight couldn't help feeling like a preview, but the programs and wholehearted response of the Orchestra to its new conductor proved impressive from any standpoint. Two exciting guest soloists, soprano Julia Bullock and violinist Leila Josefowicz, added special luster.

Fulfilling current duties as an SFS artist-in-residence, Bullock joins Salonen in 2020-21 as one of eight forward-thinking "Collaborative Partners." Her commanding intelligence and wonderful singing talent were obvious when she made a memorable San Francisco Opera debut in John Adams' "Girls of the Golden West," but local listeners knew her in 2013 when she stopped the show singing "Somewhere" in MTT's semi-staged production of "West Side Story." Her most recent appearance in French-language songs, Benjamin Britten's "Les Illuminations" to words by Arthur Rimbaud, and Ravel's "Three Poems of Stephane Mallarme," included Bullock's own English translations in the program notes. The contribution provided insight as to the depth of her artistry and explained the intensity of the performance. She knows what she is singing and intuitively inhabits the meaning. With Salonen's solid support, Bullock's interpretation was thoroughly convincing. The warmth of her tone, with a dramatic edge, lent interesting drama to Britten's haunting score and Rimbaud's mysterious words.

Salonen opened and closed the subtly structured bill with two contrasted orchestral works. Steven Stucky's imposing "Funeral Music for Queen Mary (after Purcell)" was a big, solemn opening, played with precision. The conductor's direction, athletically strong and clipped, occasionally borders on severity, but there is no denying the results. The score, written at Esa-Pekka's suggestion in 1992, represents one composer's admiration of another, but Stucky's brief (10 mins.) modern take is gripping itself. The concert ended with Ravel's shimmering "Mother Goose," offering a softer look at Salonen's fascination with orchestral coloring. It was a tantalizing introduction to his restless, fresh probing of established repertoire.

Last week, Salonen bid au revoir with a highly theatrical concert that featured his own Violin Concerto, played with ferocious virtuosity by Leila Josefowicz. The concert started with the conductor's unexpectedly light-hearted view of Beethoven's Overture to "King Stephen." Ripping into as if it were the overture to "Oklahoma!," Salonen delighted in the composer's stops and starts, and quick shifts of mood.

The Salonen Violin Concerto, written in 2009 and first heard at DSH in 2011, finished the first half with a strenuous workout for soloist and orchestral musicians. To say Josefowicz, her colleagues, and the conductor were up to the task would be understatement. The Concerto is a nonstop summation of Salonen's stated compositional mission to date. Bold, dynamic, challenging, and classically beautiful, the score is mindful of musical history, but never sounds derivative. Salonen manages to engage listeners with a blend of uncompromising integrity and unique invention, and Leila Josefowicz is the perfect soloist. When he repeatedly turned tumultuous applause back to her and the orchestra, she happily pointed back. They are both stars.

I grew up on Leonard Bernstein's marvelous recording of Carl Nielsen's Symphony No. 5 with the New York Philharmonic. Appreciation of the great Danish symphonist's work grew with Herbert Blomstedt's advocacy during his decade in SF. Esa-Pekka promises a fresh look at the classics in his coming appointment. He certainly offered a thrilling taste with his interpretation of the mighty Fifth.

The composer is known for gloriously sweeping melodies and exultant mastery of orchestration, but Salonen, even more than Blomstedt, paces the drama with passion and precision; think Pierre Boulez with heart. The orchestra played superbly, and percussionist Jacob Nissly and clarinetist Carey Bell were outstanding in solos. The brass, so important in Nielsen, followed the conductor's tough direction with shining power.

This week, MTT returns to the podium for two weeks of concerts before his last European tour with the Orchestra March 17-April 7. Friday, March 6, MTT conducts Mahler's Sixth, the emotional heart of his lifelong commitment to the composer. sfsymphony.org