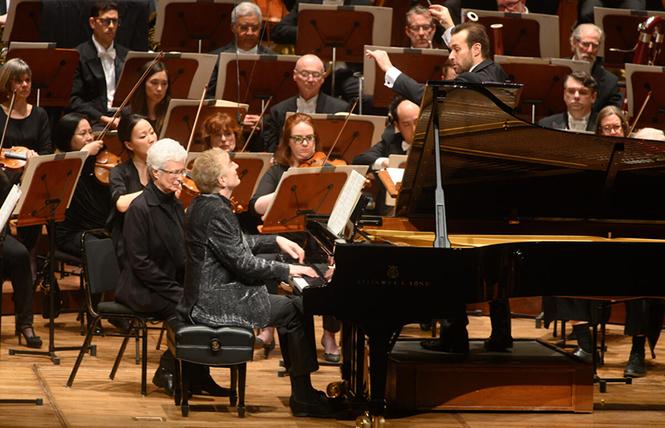 Venerable maestro Herbert Blomstedt wrapped his annual visit with soul-nourishing performances of Beethoven and Brahms. An enthusiastic 20-something listener confided curiosity about the conductor's eminent reputation. I was heartened to see the old lion still selling out DSH on a Friday night. Grateful crowds rewarded him with standing ovations fit for a rock star.

Jean-Yves Thibaudet appeared next for Aaron Zigman's "Tango Manos," Concerto for Piano and Orchestra. Thibaudet originally suggested Zigman to Long Yu, founder and former artistic director of the Beijing Music Festival, as a contender for a projected tango concerto. Noted for many film scores, the composer first worked successfully with the celebrated French pianist on the soundtrack music for the 2017 "Wakefield" starring Bryan Cranston. Thibaudet loves the music of Argentina, and his previous experience with Zigman came to mind for the work co-commissioned with Beijing Music Festival, Radio France, and the San Francisco Symphony.

Three distinct movements show the composer's gift for melody and orchestration. The inherent sexiness of the dance permeates the score, and SFS players proved their versatility. Confidently responding to Zigman's sinuous beat and the conductor's lead, they lifted the score to a higher level. As a stimulating selection for a Pops concert, "Tango Manos" has an assured future. Comparing it to the music of renowned Argentine tango composer, bandoneon player and arranger Astor Piazzolla, some listeners were puzzled, but everyone agreed it was fun. Thibaudet tore through the grander pages, caressed the softer moments, and seduced with trademark style. Who could resist?

The evening closed with Saint-Saens' massive but gloriously detailed Symphony No. 3, "Organ." An audience favorite, the Third also provides an opportunity to blow the dust from the pipes of DSH's magnificent Ruffatti organ. Jonathan Dimmock essayed the leading role with powerful clarity, and the Orchestra, after some shrill moments in the beginning, followed conductor Gabel to an expectably triumphant (and big) finale.