Beethoven is this year's birthday boy 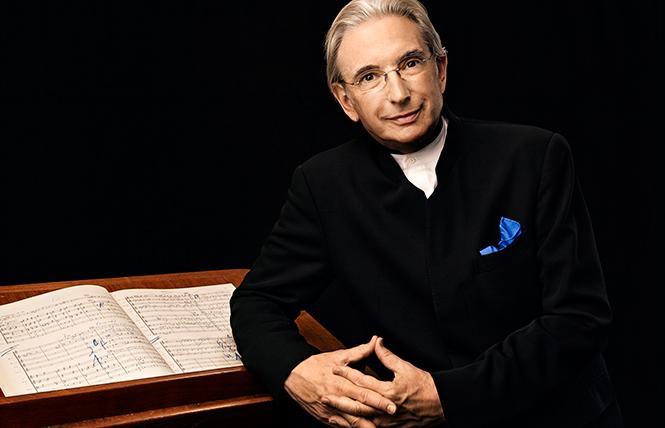 The San Francisco Symphony has started the new year at Davies Symphony Hall with a month of especially satisfying concerts. All have followed a smart game plan. Say hello to 2020 with "Beethoven250," virtuosic guest soloists, a new co-commissioned work, and World and SFS Premieres.

It wasn't a competition, but the World Premiere of Music Director Michael Tilson Thomas' "Meditations on Rilke" easily took pride of place. The rewarding song cycle moves MTT's compositional canon onto a level of importance that seems as inevitable as it is winning. "Four Preludes on Playthings of the Wind," on a text by Carl Sandburg, was also a major revelation (West Coast Premiere, 2017). Everything about the impressive score signaled a sea change in the composer's confidence. Myriad influences of a life in music seemed fully absorbed and reemerged with fresh bold urgency.

Earlier settings of poetry by Walt Whitman and Emily Dickinson proved successful, too. "From the Diary of Anne Frank," narrated by mezzo-soprano Isabel Leonard, was the latest example we heard of MTT's gift for illuminating words. The moving work, written for UNICEF in 1990, didn't get its SFS premiere until 2018. The neglect is remedied by a recording on the orchestra's in-house SFS Media label for release in June 2020, with "Meditations on Rilke" and "Street Song." This should be a two-disc set of MTT's music, but we still eagerly anticipate the single installment, which coincides with the final month of his 25-year tenure.

Mezzo-soprano Sasha Cooke, fulfilling her current SFS artist-in-residence commitment, collaborating once more with MTT, sang with bass-baritone Ryan McKinny in the flavorful, reflective, and fantastic Rilke settings. She made subtle references to Mahler clear while McKinny steadily navigated difficult passages evocative of Alban Berg. There are traces of Schubert and even a blast of barrelhouse piano in the accomplished score, and the orchestra again proved the sympathetic ability to roll with a longtime colleague's demands.

In mid-January the West Coast premiere of Julia Wolfe's exuberant "Fountain of Youth," an SFS co-commission, rocked the house on Grove Street again. Music is the elixir of energy for the Pulitzer Prize-winning American composer, and her brief but compelling score needs both physical and musical dynamism to work. It is loud, ingenious and, as she says herself, some "serious fun."

A co-founder of the Bang on a Can collective, Wolfe stays young writing music that doesn't fit into any niche. She orchestrates brilliantly, and the musicians, especially the percussionists, joined totally in the controlled musical melee. They say, "If it's too loud, you're too old," and one listener in the Terrace seating fled the performance holding her ears, but it was an overreaction. The composer probably would have been amused; the rest of us felt rejuvenated.

The program included pianist Emanuel Ax joining old associate MTT in Beethoven's Piano Concerto No. 2. Part of the worldwide celebration of the composer's 250th birthday, the performance had Ax showing his own youthful chops in the outer movements. The lovely central Adagio showed the wisdom of his age.

Last week, Russian conductor Dima Slobodeniouk made his ingratiating SFS debut with brilliant Armenian violin soloist Sergey Khachatryan (SFS debut 2007 as a Shenson Young Artist). They worked together beautifully in the awesome Sibelius Concerto in D minor. Khachatryan can go from near-silence to full-voiced power with intense concentration and technique. His exquisite sweetness of tone stays audible. His agreement with Slobodeniouk to underline the dynamic contrasts in the score moved a bravura performance to an interpretive triumph.

Slobodeniouk's nod to "Beethoven250" included a brisk and richly detailed performance-closing Symphony No. 7. He opened the concert with the first SFS performances of German composer Jorg Widmann's "Con brio." The thoroughly entertaining piece from 2008, written for a concert that featured Beethoven's Seventh and Eighth Symphonies, takes fragments of the composer's works and reassembles them in a clever collage that makes it hard (and fun) to tell where Beethoven and Widmann combine and diverge.

January ends and February starts with the annual return visit by SFS Conductor Laureate and acknowledged Beethoven expert Herbert Blomstedt. He begins with Brahms and Berwald, but features the birthday boy in his second set of concerts with the Symphony No. 2. www.sfsymphony.org.

From Sublime to Ridiculous