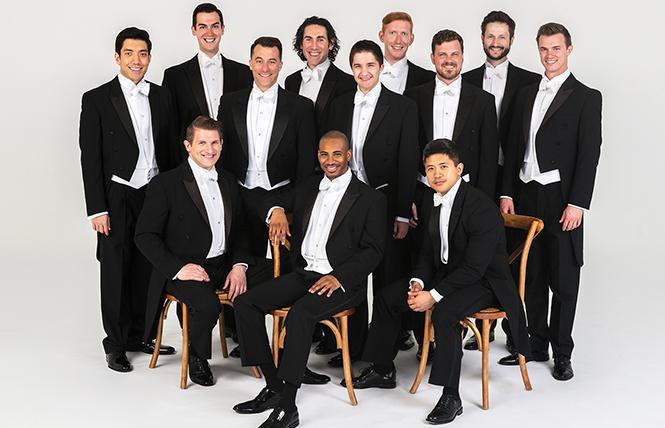 The men of Chanticleer. Photo: Courtesy the subjects

For many in the Bay Area, the holiday season doesn't really start until they've attended the annual Chanticleer Christmas concert. "The world's reigning male chorus" (The New Yorker) epitomizes Christmas, perhaps because choristers and audience are bonded by hope for at least one night. The Chanticleer holiday program varies little in format from year to year, but why tamper with a revered tradition?

Chanticleer always starts this program with its 12 men dressed in tuxedos, holding lighted candles as they enter the darkened church in medieval solemnity and intone the Gregorian chant "Quem terra," then proceed to Latin Renaissance polyphony. Philips' lively "Gaudens gaudebo" and Guerrero's transcendent "A un nino llorando," with countertenor soloist Kory Reid, were standouts. Their blend of crisply etched voices rises to the rafters.

The second half finds the men scattered through the audience, vocalizing standard Christmas songs ("I Saw Three Ships," "Away in a Manger") and more unfamiliar carols (the sophisticated German harmonies of "Susanni," the serene French melody of "Quelle est cette odeur agreable.") Whether revisiting old favorites (the bouncy Basque "Riu, riu, chiu") or welcoming newcomers, each piece is sung so reverently, harmonizing unique arrangements, that it feels heard for the first time. Franz Biebl's "Ave Maria," perhaps Chanticleer's most requested song, remains the definitive version. Two American folk hymns, "I Wonder as I Wander" with Andrew Van Allsburg's majestic tenor solo, and "The Babe of Bethlehem," were highlights, culminating in Rosephanye Powell's soaring Christmas Medley of African-American spirituals and gospel music.

Gay Chanticleer member Zach Burgess reflected on what their Christmas concerts mean to him, "'A Chanticleer Christmas' and San Francisco go hand in hand, and because Chanticleer's reach is so broad I always get a sense of pride from our San Francisco audiences. There is a hometown atmosphere during the holiday season because we see so many familiar faces. Chanticleer's roots are in this community, and without its continued passion and support we wouldn't be able to share our gift with the rest of the world."

Countertenor Alan Reinhardt recited Edward Bolton's poem "A Carol in the Pastures," "Sweet music, heavenly rare, but voices most divine make blissful harmony: Voice that seem to shine, for what else clears the sky." It describes Christmas angels announcing their good news to the shepherds, but also evokes Chanticleer's rapturous effect on their listeners.