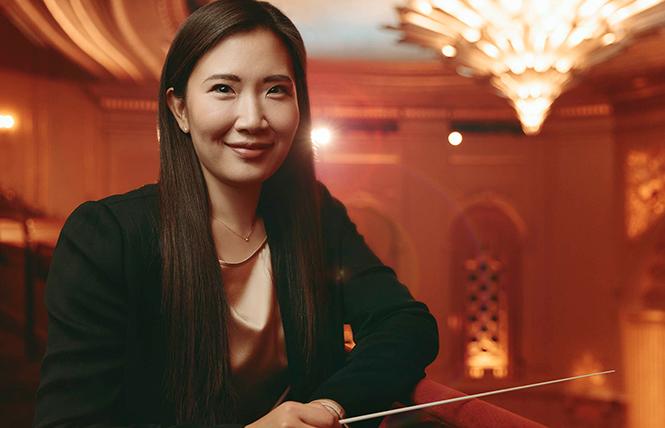 The heartfelt welcome for incoming Music Director Designate Eun Sun Kim from the San Francisco Opera company, board, orchestra, stage crew and members of the press last Thursday could not have been more excited or sincere. On the stage of the opera house with its majestic view of the beautifully restored auditorium, General Director Matthew Shilvock introduced ESK to the adoring and curious music-lovers assembled.

"Moments of artistic transformation are rare for our company," Shilvock admitted, as "this is only our fourth" Music Director in its history. He hailed Kim's "thrilling artistic vision," apparent to all of us who heard her riveting "Rusalka" in the summer season and were privy to her stellar reputation.

Indeed, the youth, vitality, artistic commitment and sheer charisma of this new driver of operatic forces are clear to all. Though she's self-taught in six languages and won't conduct an opera until she understands his idiom, Kim said, "Music has always been my language." She doesn't take the reins of SFO until the 2021 season, but was set to conduct the Adler Fellows concert the night following the presser (see review this issue) and a production of "Fidelio" next season. Beethoven's only opera is, she said, "a dream piece for all conductors."

Asked what she does to relax, Maestra Kim allowed herself a sardonic chuckle. "I don't relax!" Then she told us that she has taken up yoga ("very different from conducting") beginning two months ago. "It's not working yet!"

ESK has dazzled and impressed leading figures in the opera world from Asia, Europe and across the U.S. for a few years now. With incoming San Francisco Symphony Music Director Esa-Pekka Salonen set to begin his reign at Davies Hall in September 2020, this means that the power positions on both sides of Grove Street will shortly be in the hands of two new, fresh, vibrant leaders. The Bay Area classical music community could not be more delighted with what's sure to be in store.