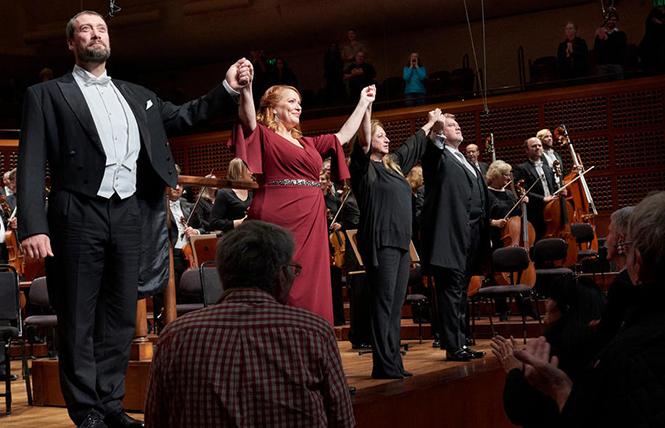 The San Francisco Symphony closed November with concerts featuring works by big-name Austrian and German composers. Impressive guest artists and conductors joined the Orchestra at Davies Symphony Hall during the two weeks before Thanksgiving. There wasn't a whiff of the holidays in the lobby or auditorium, but the classy SFS doesn't believe in premature trimming. The traditional tall trees and festive greenery will arrive in December. The lead-in to Turkey Day was celebrated instead with gratifying servings of music.

Last week, Conductor and Music Director of the Pittsburgh Symphony Orchestra Manfred Honeck returned to lead two works from his native city of Vienna, Austria. Norwegian pianist Leif Ove Andsnes opened the program with Mozart's Piano Concerto No. 22. In recent years, Andsnes has performed pieces from his ambitious "The Beethoven Journey" worldwide, in collaboration with the Mahler Chamber Orchestra. The partnership has been renewed in "Mozart Momentum 1785/86," which dovetailed nicely with his latest DSH appearance.

The conductor was likely getting the brass warmed up for the second half of the program, Anton Bruckner's Symphony No. 4, "Romantic." The composer named the work rightly; in four characterful movements, he conveyed everything that is profound and problematic with his massive musical architecture. If anyone is up to making sense of his abrupt stops-and-starts, meandering narrative, and heavy orchestral demands, it is Honeck.

From the softest writing for strings to the loudly dramatic brass choirs, Bruckner constructed a genuinely Romantic symphony, and Honeck managed to unify the orchestra into a splendid, huge organ. There were some minor gaffes, but this was a seasoned and sensitive conductor's interpretation, and the musicians did their best to comply.

The week before, Principal Guest Conductor of the Orchestre de Chambre de Lausanne Simone Young replaced previously announced Antonio Pappano (scheduling conflict) in R. Strauss' "Metamorphosen" and Wagner's Act I from "Die Walkure." Young showed her determined grasp and high-profile visual technique (she swoops a lot) in her memorable DSH debut last season. She didn't exactly upstage the excellent trio of soloists in her recent performance, but rather, joined them as another character in the action.

A Strauss and Wagner interpreter of note, Young was the first woman to record Wagner's complete "Ring" cycle. Her vocalists are also acclaimed Wagnerians. Young's guidance of Strauss' involving "Metamorphosen" was a fitting lead-in to "Die Walkure."

Former SFO Adler Fellow Stuart Skelton was in appropriately heroic voice, and Emily Magee was deeply sympathetic, keeping her lovely tone steady at any volume. Ain Anger's cavernous sound easily projected through the DSH acoustic. They proved you don't need sets, costumes, lighting, or amplification to make a convincing theatrical experience. The inexorable tread and thrilling climax of Wagner's glorious first act of the second opera in the "Ring" proved richly satisfying. The world-class performance makes my list for one of the top opera performances of 2019.

Ironically, another set of Teutonic siblings were lighting up the San Francisco Opera as "Hansel and Gretel" opened across Grove Street the same weekend. Suffice it to say, Wagner's brother-and-sister act is not G-Rated, but Skelton and Magee made the incestuous couple remarkably understandable, and almost as innocent.