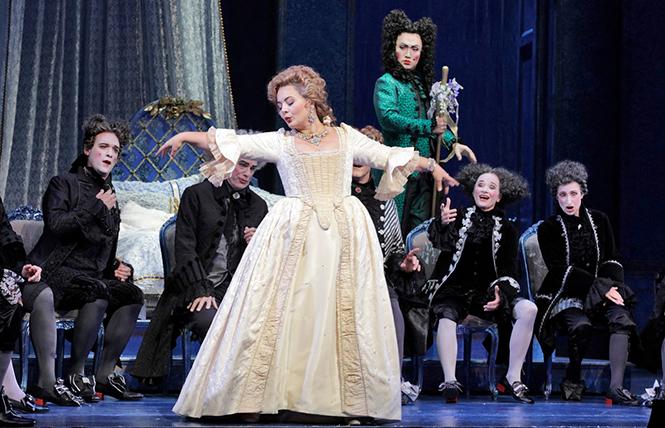 First impressions are important, but they shouldn't lead to snap judgment. It is usually wiser to stop and think, but in the world of opera — especially Puccini — lovers tend to fall in love at first sight. The results are often tragic, but they can also produce some grandly passionate music.

Puccini's early hit "Manon Lescaut" is a good example. The San Francisco Opera's current revival of a production last seen in 2006 follows the time-honored formula in a deliberately traditional way. Boy meets girl, boy falls instantly, and boy loses girl just as fast. Boy gets girl back, only to lose her again in "a barren wasteland in Louisiana." If that last bit doesn't exactly fit the conventional mold, we forgive Puccini and his five (!) librettists for their vague geography, simply because the music is so pretty.

It may not be to everyone's taste, and I admit to enjoying "Manon Lescaut" as not much more than a melodious precursor to Puccini's later masterpieces. I lay blame on the panel of librettists and their source, a famously scandalous novel by Abbe Prevost, for weaknesses in the plot and dramaturgy.

It is hard to appreciate such a self-centered woman, fickle and thoughtlessly quick to trade true love for gaudy bling and luxury. The men who adore her fuel Manon's vanity, and admittedly, women suffered limited options at the time, but the libretto's lack of character development and continuity doesn't elicit much sympathy. 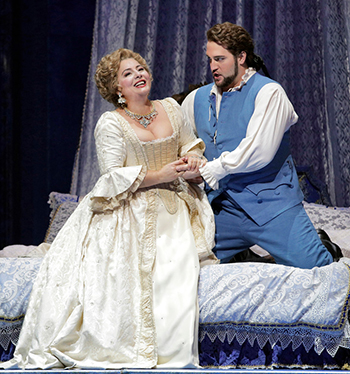 If Manon were alive today, she would be a social-media influencer, creating her brand with reality broadcasting and product endorsements. In Prevost's era, material girls were branded, too, but literally — at least as Tambosi tells it in a jaw-dropping, butt-stamping episode in Act III replete with steaming tushes. They also got a one-way ticket to America, shipped en masse to the wilds of Louisiana.

Tambosi's old-style direction, with detailed production design by Frank Philipp Schlossmann, might seem a good way to deal with a creaky plot, but deference to the melodrama also heightens the absurdities. Crowd scenes are congested, lacking detail and visual coherence. Everyone at the Inn in Act I appears to be in the same costume. The visuals are rich in SFO quality, but the stage picture is still confusing. Duane Schuler's subtly sensible lighting design helps, but Tambosi and Schlossmann don't agree that less is more.

The 2006 presentation was well-received with superstar Karita Mattila in the title role, which probably explains the revival. This go-round can boast plenty of star power of its own. Soprano Lianna Haroutounian and tenor Brian Jagde are reunited as Puccini lovers after their impressive SFO performances in "Tosca" in 2014. Haroutounian made her Company debut in the title role. Both now make role debuts as Manon and Chevalier Des Grieux.

Jagde was in ringing voice on opening night, and his strong features and clear-cut acting continue to make a great fit for the War Memorial stage. La Haroutounian has also found a convivial home. Her creamy tone and steady range are seductive from top to bottom, lustrous and perfectly audible.

Tambosi says Manon is a different woman in all four acts, which makes up for gaps in the narrative. It is an interesting explanation, but making her numbly meek to start, then annoyingly capricious and ultimately self-pitying does no favors to the actors. The cast must supply credible motivation. Thankfully, their emotions are sufficiently conveyed by uniformly expressive singing.

It was good to see the warm welcome given former SFO Music Director Nicola Luisotti at the start and end of the performance. The famous Intermezzo "The Journey to Le Havre" before Act III also earned him a big ovation. It was well-deserved, and the orchestra responded to the maestro's sure hand throughout the night with symphonic richness.