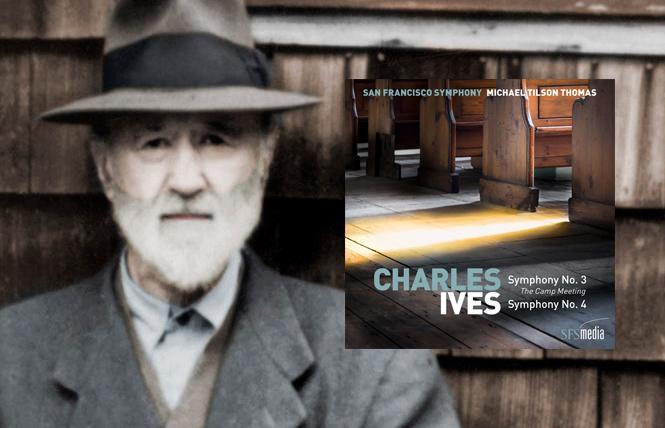 Young Michael Tilson Thomas inherited a passion to popularize Gustav Mahler and Charles Ives from his legendary mentor Leonard Bernstein. Accepting the mantle made him a dedicated champion. The famously successful advocacy continues on Nov. 8 with the drop of Ives' Symphony No. 3, "The Camp Meeting," and Symphony No. 4, with Selected American Hymns, on the in-house SFS Media label. Available as 5.1 surround-capable SACD, digital download, and streaming via major retailers, MTT's latest release of masterworks by "the George Washington of American music" sets an impressive seal on a life-long quest.

After 25 fabulous years with the San Francisco Symphony, a major part of MTT's own legacy is a prize-winning SFS Media discography. "The Mahler Project" alone would be enough to secure his place in recording history, but other discs featuring contemporary composers and 20th-century mavericks such as Henry Cowell, Lou Harrison, and Edgard Varese have proved likewise rewarding.

The setting by Henry Brant of Ives' Piano Sonata No. 2 as "A Concord Symphony," recorded with Copland's modernist Organ Symphony for SFS Media, was another smashing example of just how persuasive MTT and his hearty band can be when sharing an adventure.

A selection of hymn tunes that served as inspiration for Ives, including "Nearer My God to Thee," "There is a Fountain," "Beulah Land" and "Sweet By and By," precedes each symphony on the new disc. SFS Chorus director Ragnar Bohlin adds fascinating context, and the singers sound rich and expressive as ever. The amazing dynamic range of the recording puts listeners in the best seats in Davies Symphony Hall.

Charming and immediately accessible, Symphony No. 3, "The Camp Meeting," is an example of Ives' mastery of tone painting. From nostalgic warmth to exuberance and finally "Communion," the Third is an irresistible look at the composer's relatively uncomplicated poetic side.

The Symphony No. 4 is another matter altogether. Here is a big, splashy, sometimes chaotic collage of everything iconoclastic about him. Some detractors have called him out for his subtle and not so subtle misogyny, homophobia, and occasional braggadocio, but that is Ives the man. Historians will continue to debate, but consensus on Ives the composer is as complex as the music.

For MTT, the verdict is clear: "At its core, the music of Charles Ives is an expression of the heart and soul of America." The pageantry of the Fourth encapsulates everything deep and provocative in Ives' uniquely American philosophy. The SFS performance is both a joyride and a meditation. The massed forces onstage tick every box, making miraculous and highly entertaining sense of each piece of the puzzle.

MTT calls Ives "America's greatest composer" and a poet/philosopher "on par with Walt Whitman, Emerson, and the Transcendentalists that he so admired." Judging by the sheer power and haunting beauty of the new release, I'm inclined to agree.