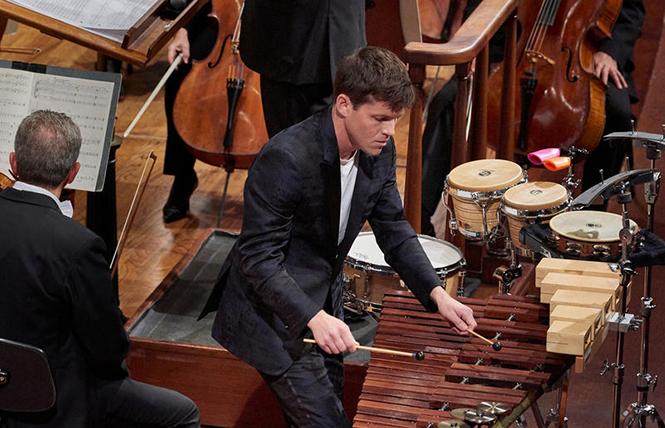 The San Francisco Symphony celebrates Día de los Muertos with a concert event, community activities, and screenings of Disney-Pixar's "Coco" on November 1 & 2, but colorful decorations are already up at Davies Symphony Hall. Recent concertgoers have been welcomed with festoons and whimsical lobby art. The world premiere of a commissioned work and two impressive guest artist debuts fit the dramatic atmosphere.

SFS Principal Percussion Jacob Nissly is one of the orchestra's standout players, usually showing his skills from the rear of the stage. He changed that, literally moving all over the place, as soloist in the premiere of friend and colleague Adam Schoenberg's new percussion concerto, "Losing Earth."

A cry for attention to environmental crisis and climate change, the three-part score started theatrically with Nissly making an entrance from the auditorium, drumming an imposing strapped-on set. Other percussionists, stationed throughout the hall, added to the march, but the initial excitement dissipated as the work went on.

Statements from guest conductor Cristian Macelaru and the composer covered the universal possibilities of music to communicate and the intent of "Losing Earth" itself, but Nissly's bravura presentation and Macelaru's attentive support could not elevate the score much higher than accomplished soundtrack music.

Not necessarily a bad outcome, and the pop influences were pleasing to the ear. Still, the subject was let down by the conventional structure and stock ray-of-hope message. Better the audience gets the meaning from the program notes and concentrates instead on Nissly's high-energy performance. As pure music, "Losing Earth" is enjoyable and predictable, with a truly exciting ending. Jake did his old friend proud. 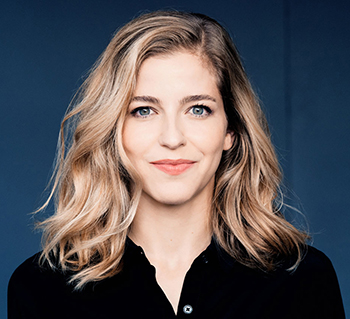 Last week, the volume was even louder as Ukrainian pianist Alexander Gavrylyuk made his spectacular SFS debut playing Prokofiev's outrageous Piano Concerto No. 1 (1911). A tour de force at any speed, the First requires almost superhuman skill and stamina. With young American conductor Karina Canellakis in solidarity, Gavrylyuk ramped up the tempi (and temperature) several notches, still managing somehow to articulate every note. I wouldn't want to hear the sassy score treated so frenetically on a regular basis, but there was no denying the thrills-and-spills wonderment of his daring approach.

Gavrylyuk's returning for an encore, a lovely Rachmaninoff "Vocalise," was another surprise. By all rights, his hands should been bloody stumps by then, but the pianist was calm and collected, miraculously ready for another round.

After intermission, Canellakis continued her debut appearance with Shostakovich's Symphony No. 7 in C Major, Opus 60, "Leningrad," the composer's mighty documentary soundtrack to the epic story of the 900-day siege of Leningrad by the German army in WWII.

Typical of Shostakovich in quasi-propaganda mode, the Seventh can turn towards bombast and downright pandering, but, also characteristically, it shows his unerring gift for emotional understanding. Few would call it his greatest work, but no one can say it isn't evocative of a terrifying time and the endurance of a suffering people.

One either commits to the composer's violently episodic newsreel or heads for the exit after the massive first movement. Canellakis was up to the challenge, and it was clear the mostly attentive audience was, too, though it was baffling to see a young listener texting from start to finish. Of course, he shot to his feet for the inevitable standing ovation. So who knows? Maybe he was sharing the big adventure with a friend.

The full-tilt energy of the famous marching tune in the first movement, which builds "Bolero"-like to a shattering climax, rides chock-a-block with passages of grim desolation and sorrow in the rest of the work. A conductor has little room for interpretation. The music is never less than obvious, but that is also the obvious point. Canellakis will get a better chance to show her range when we have her back, and we damned well should. For now she proves a fast talent for bonding with new musicians, and superior ability as a traffic director.

The orchestra met the demands of the marathon with admirable willingness, providing some of the richest sounds of the season. Modestly, Karina Canellakis refused a solo bow, pulling Concertmaster Alexander Barantschik from his chair to avoid it. He acquiesced, though everyone, onstage and off, really applauded for her.