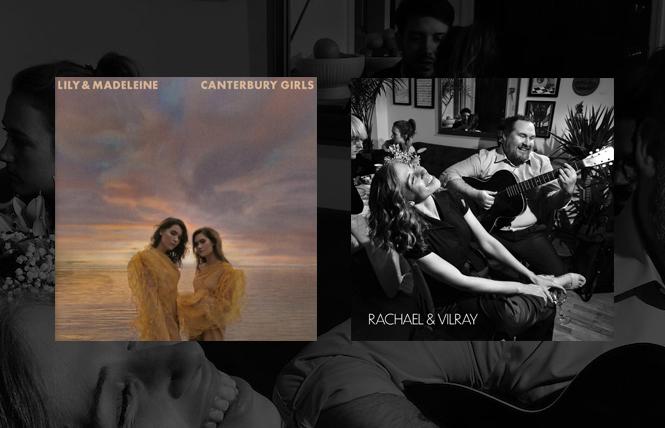 As it turns out, Pete & Chasten Buttigieg aren't the only fascinating twosome to come from Indiana. Singing-songwriting sisters Lily & Madeline Jurkiewicz have been at it since high school in Indianapolis. For the pair's fourth album "Canterbury Girls" (New West), they've teamed up with Grammy-winning production duo Daniel Tashian & Ian Fitchuk, who bring some of the radiance they provided for Kacey Musgraves' "Golden Hour" to this set of 10 songs. Lily & Madeline haven't abandoned the sonic spirituality of former label Asthmatic Kitty, as you can hear on the empowering gospel pop of "Self Care" and the heavenly harmony of "Supernatural Sadness." There's a touch of blue-eyed funk on "Just Do It," and "Go" and "Bruises" are so pretty it almost hurts. The persistent beat of "Pachinko Song" and the retro rhythm of "Can't Help the Way I Feel" will motivate listeners to get up and dance. Lily & Madeline perform on Nov. 10 at the Great American Music Hall in San Francisco.

Lake Street Dive's lead vocalist Rachael Price has too much talent to contain in one place. With three solo albums to her name, and more than double that with Lake Street Dive, Price has talent to burn. Price's new side project, a musical collaboration with singer-songwriter Vilray, has resulted in the creatively titled album "Rachael & Vilray" (Nonesuch). The 12 new songs, all in a retro style reminiscent of Susan Werner's "I Can't Be New," are like a trip down memory lane, except for the fact that they're 21st-century compositions. Standouts include "I Love the Way You're Breaking My Heart," "Do Friends Fall In Love?" and "At Your Mother's House."

Julie & Buddy Miller have made names for themselves as solo artists and in-demand songwriters for others for many years. They've also released a few albums as a married musical duo. "Breakdown on 20th Avenue South" (New West) is the latest. Julie's voice, an acquired taste for some, is a cross between Victoria Williams and Rickie Lee Jones, used to great effect on "Till the Stardust Comes Apart," "Everything Is Your Fault" and "Storm of Kisses."

Canadian cousins Kacy & Clayton return with their third album. "Carrying On" (New West). It's a strong set of songs delivered in a retro-country style that strikes a careful balance between whimsical ("The South Saskatchewan River") and serious ("Mom and Dad's Waltz #2") that illustrates the duo's versatility. Kacy & Clayton perform on Nov. 19 at Fox Theater in Oakland.

Neither The Black Keys nor Violet Bell has an ampersand in their names, but both are duos worth hearing. "Let's Rock" (Nonesuch), The Black Keys' (Dan Auerbach & Patrick Carney) first album in five years, lives up to the directive of the title. It rocks, which is bound to please longtime fans. The rock of the title takes a few different directions, ranging from lightly funky ("Shine a Little Light") and country-tinged ("Eagle Birds") to nearly full-throttle ("Lo/Hi") and downright mellow ("Sit Around and Miss You," "Walk Across the Water"). The Black Keys perform on Nov. 20 at Chase Center in San Francisco.

"Honey in My Heart" (lizzy.net), the full-length debut album by NC-based duo Violet Bell (vocalist-guitarist Lizzy Ross & fiddler Omar Ruiz-Lopez), is full of sweet surprises. Examples include the saxophone on "Elephant Heart," the sampled beats on "Swimming Toward Sharks," the piano solo on "Summer Skin" and the organ on "Let Me Forget."