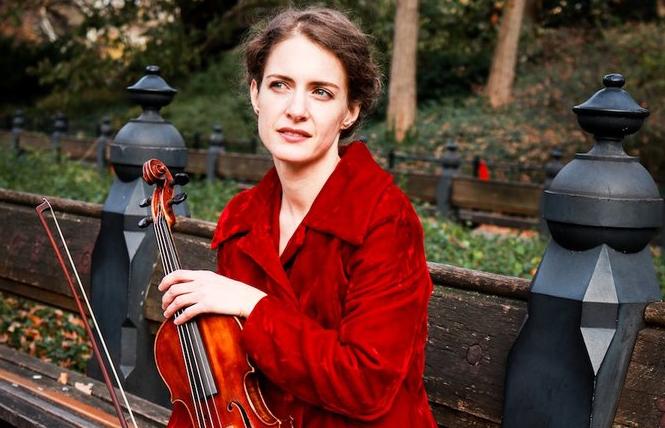 Bard Music Festival, the much-admired summer concerts event of Bard College in New York's Hudson Valley, has explored the life, influences, and music of a single composer annually since 1990. Bard Music West (BMW), the enterprising California offshoot project, has used a similar template since 2017 to excite, inform and entertain. BMW's recent weekend "The World of Grazyna Bacewicz" at Noe Valley Ministry in San Francisco expanded the formula, adding a narrative element in three emceed shows presenting a fascinating portrait of a unique and neglected composer.

During a trip to Poland, pianist Allegra Chapman, Co-artistic Director and Executive Director of BMW, and cellist Laura Gaynon, Co-artistic Director and Associate Director, discovered the music of Grazyna Bacewicz (1909-69). Immediately intrigued, they researched her life, music, and contemporaries. They determined to share a mutual conviction: Bacewicz is one of the most significant composers of the 20th century. Her music still resonates and proves genius is above gender and cultural stereotypes.

Surviving war and political tyranny, the Polish composer and violin and piano virtuoso wrote hundreds of scores, building a distinctive style influenced by everything from folk music to the avant-garde. Popular as a performer and praised for her compositions, Bacewicz inexplicably faded from the ranks of regularly performed composers. Being a woman is the most glaring reason. Chapman and Gaynon begin to right that wrong by entrusting talented young musicians and colleagues to breathe new life into a vivid sampling of Bacewicz's wealth of overlooked masterworks.

Surrounding thrilling revelations with music by other writers of the period, readings from the composer's letters (idiomatically voiced in recordings by Anna Samborska), and a welcoming host, Mona Tsay, given to endearingly corny puns, Program 1: "A Rising Star" quickly engrossed a receptive audience. The concert, covering Bacewicz's early career in Paris, showed influences from her native Poland, neoclassicism, and legendary teacher Nadia Boulanger. 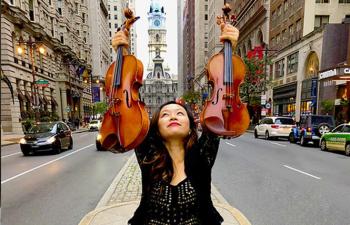 Luosha Fang with both of her instruments, violin and viola. Photo: Donald Allison

Bill Kalinkos, clarinet, essayed Stravinsky's Three Pieces for Solo Clarinet (1918), displaying the strong-lined minimalist attraction of Neoclassicism for composers leaving behind the upholstered world of Romanticism. Bacewicz's Piano Quintet No. 1 (1952) stands with a foot on both sides of WWII, and has undeniable whiffs of nostalgia for the most Romantic of chamber ensembles. Allegra Chapman joined the quartet of string players who opened the concert at the piano, in an inspired performance of the startlingly original and involving score. The program annotator's observation that here is where comparisons end summed it up nicely. The Piano Quintet firmly determines recognition of Bacewicz "as a composer who really sounds most like herself."

The Saturday matinee Program 2: "From War to Warsaw Autumn" covered more post-WWII compositions, and included the world premiere of a 2019 BMW commission, Melanie Clapies' "Remains: Trio for Strings." Violinist Clapies earnestly introduced her new piece, but it didn't require much explanation. Jessica Chang, viola, and Laura Gaynon, cello, joined her, barefooted, to add physical stomping to the work's stark conclusion. They also added wordless voice to the keening dirge of mourning mothers and memories of war.

Relatively brief but full of powerful episodes, "Remains" brings to mind Penderecki's String Trio and was complementary with Bacewicz's frequent impassioned outbursts. Clapies is a performer who also writes music and fiction. Among her staggering list of achievements, Bacewicz actually found time to write murder mysteries!

She also wrote art songs, and soprano Sara LeMesh, fresh from her triumph in the starring role of West Edge Opera's production of Missy Mazzoli and Royce Vavrek's "Breaking the Waves," delivered two examples. Accompanied by Allegra Chapman, she affirmed her incredible range with a bluesy cabaret number, "I'm Not Expecting Anybody" by Witold Lutoslawski of all people, an anthem and vocalises by Panufnik, and some ditties by Tadeusz Baird.

Luosha Fang and Allegra Chapman finished the first half with Bacewicz's highly contrasted Partita for Violin and Piano (1955). Chapman opened the second half with the virtuosic Piano Sonata No. 2 (1953), representative of the composer's complete grasp of form and expression. I wondered how such a work could languish for so long outside the standard repertoire.

Tesla Quartet ended the concert with a rollicking, mercurial rendition of the moody but essentially good-natured String Quartet No. 4 (1951). It was a fine and satisfying conclusion, but I still can't forget the impact of that wonderful Sonata.