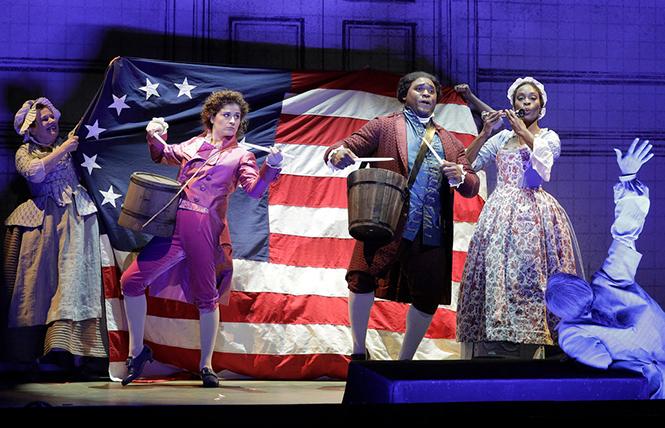 After more than 200 years, the perpetually hip writing team of Mozart and Da Ponte still has a hit on their hands. "The Marriage of Figaro" opened at the War Memorial Opera House last week, and it's funnier and timelier than ever.

Casting the central roles of servants Figaro and his intended bride Susanna with black singers added the possibility of even more subtle and disturbing subtext. The late replacement of Irish soprano Jennifer Davis, who is white, with SFO debutante Nicole Heaston, who is African American, as the Countess changed the potentially racially charged dynamic. Instead, it proved again the artistic rewards of color-blind casting and allowed some fortuitous humor. When Figaro's parents are revealed (and both are white) in Act III, the house rocked with appreciative laughter.

Cavanagh's balletic direction spins through Erhard Rom's remarkably handsome and functional set design, brilliantly lit by Jane Cox (SFO debut), with zip and agility. The comic disguises, quick entrances and exits, and well-timed jokes all land perfectly. It is French farce in an American setting, with little of the more serious-minded original concept on display. The gorgeously detailed costumes by Constance Hoffman and other visual vignettes, such as a sophisticated reference to "The Spirit of 76" from the director, help remind us. 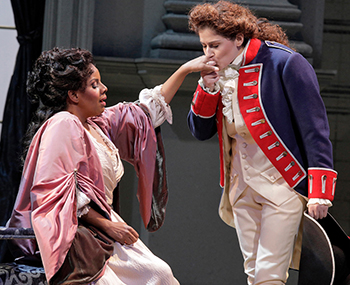 Nicole Heaston as the Countess and Serena Malfi as Cherubino in Mozarts The Marriage of Figaro. Photo: Cory Weaver/San Francisco Opera

Without solid musical performance, of course, no production of Mozart's enduring hit parade will succeed. Hungarian conductor Henrik Nanasi, in an awesome display of range, returns after his triumph in SFO's magnificent "Elektra" in 2017 to lead a crisp, nicely plumped reading. His taming of the quirky acoustics of the pit and a wonderful horn section brought fresh charm and delight to the score. "Figaro" is already in my Top 5; Nanasi moved it closer to No. 1.

In the title role, Texan bass-baritone Michael Sumuel is adept with good acting, rich voice and complexity of interpretation, showing the right mix of anger and amusement. He is the perfect foil for charming Trinidadian soprano Jeanine De Bique (SFO debut) as resourceful Susanna. Her sparkling voice and feisty good humor are magnetic.

Any complaint I have with Da Ponte's clever reworking of Beaumarchais might be the sometimes-confusing plethora of secondary roles. Cavanagh and his nimble cast have that covered, even to the point where the gardener's daughter Barbarina and music teacher Basilio (tenor Greg Fedderly) don't seem tacked on. Restoring often-cut recitative for Barbarina, appealingly sung by current Adler Fellow Natalie Image, really helps clear things up.

Redoubtable SFO veteran mezzo-soprano Catherine Cook owns the part of old biddy Marcellina. Her quick turn from wannabe bride to doting mother is always hilarious, and even if Cavanagh has cut her aria in Act IV, Cook still manages to rivet attention and provide some solid laughs. As lawyer Bartolo and Marcellina's crony, bass James Cresswell also makes the switch from adversary to proud papa with amusing conviction.

Another singer making her SFO debut portrays horn-dog adolescent page Cherubino. Italian mezzo-soprano Serena Malfi is maybe not too convincing as a boy, but the pants role still suits her fine, physically and vocally. Rarely has the rather annoying youth sounded so alluring, and Malfi's convincing acting makes the reckless fever of sexual awakening far more endearing and understandable.

Ian Robertson's SFO Chorus makes a predictably enjoyable contribution, looking great in their beautiful costumes, and the continuo accompaniment by Bryndon Hassman (harpsichord) and Thalia Moore (cello) deserves special praise, too. Their perfect timing matches flavorfully with director Cavanagh and conductor Nanasi's tight entertainment. It proves that even at some three hours of performing length, time flies when you're having fun.

"The Marriage of Figaro" continues in repertory through Nov. 1. www.sfopera.com