This 'Faust' makes the right bargains 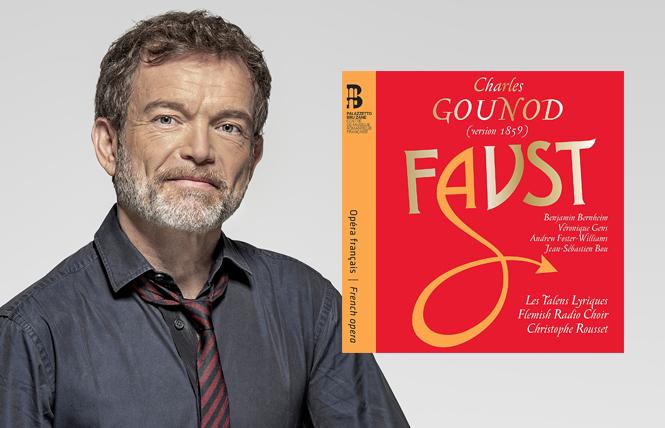 If San Francisco Opera's "Romeo and Juliette" left you with a sweet tooth for Gounod, a dessert buffet has just arrived. The Palazetto Bru Zane Centre de Musique Romantique Francais, on its elegantly packaged Bru Zane label (individual sets are numbered), has just released a performance of the composer's masterpiece, "Faust," by Christophe Rousset and his Les Talens Lyriques. It's an informed attempt to recreate what audiences would have heard at the Paris premiere at the Theatre-Lyriques on March 19, 1859. The extensive, expert documentation of the changes over the decades is invaluable.

Its musical significance is hard to overstate. Bru Zane has been at the forefront of superb recordings of lesser-known 19th-century French operas, but this "Faust" does not fall into the category of what a late colleague called the "disinterment" of deservedly forgotten operas. Few operas have held the stage as perennial repertoire more than "Faust."

In my callow youth and beyond, I was among those who considered Gounod's "Faust" a trivialization of Goethe's great poem, a glucose-overtolerant showpiece for songbirds. The new recording convincingly argues that Gounod's original "Faust" is a better opera than the one that has come down to us with the accrual of a century's alterations, additions, substitutions and other "improvements," rightly regarded as a gilded cage for golden-throated birds and, fatally, an entertainment that takes itself too seriously as a rendition of Goethe's masterpiece.

Operas of the time, not just French ones, often included "comique" elements, and not just to play to the rabble. A classic example is "Carmen" of 1875, which, after attending its 33rd performance, the young Bizet died thinking a failure, critics and audiences agreeing.

Easily the most egregious if best-intended enhancement of "Carmen" was the substitution of Ernest Giraud's composed recitatives for the original's spoken dialogue. This faux-Bizet prevailed for nearly a century, only to be completely overtaken today by restoration of the dialogue. Hearing the Giraud now requires investigating historical recordings, for which we are lucky to have Maria Callas' scorching 1964 outing.

Of course, the more Francophone singers in the cast, the better it works, but with the French cast Rousset has assembled, the restoration of the dialogue yields magic. Some of it adds to the dramatic urgency, but other passages send up the gravity of the subject in that way at which the French excel. Gounod's own "Faust" turns out to be an altogether more satisfying entertainment than the "grand" versions that have taken its place. (The same is true for "Don Giovanni," which, like "Carmen" and "Faust," without comedic elements can make for a long night in the theater no matter the excellence of the vocalism.)

Today's tastes resist the impulse that arias and other vocal showpieces be inserted or swapped out of particular performances at the behest of star singers. Gounod himself made a few such changes to "Faust," and others followed. By performing all the appropriate material for "Faust," Rousset has given us more, not less, rich music, and, as is the case in Wagner productions, the piece seems to be more fleet and engaging without disfiguring cuts.

Bru Zane has pulled out all the stops to cast this re-envisioned "Faust." Benjamin Bernheim, the young French tenor who is competing with the likes of Michael Spyres to be the greatest living French tenor, sings a "Faust" as vocally luxuriant as Jonas Kaufmann's and more tightly focused in characterization. The limpid beauty he brings to Faust's ode to Nature caps a performance of melting, deeply individual singing first to last.

Veronique Gens, who has been a colleague of Rousset's for a quarter-century, is a Marguerite who can stand comparison to any other and out-acts most of the competition. No one, not even other French singers, deploys the French language as incisively and naturally as Gens, lending the entire role a "telling" quality. But the brilliant coloratura she brings to the "Jewel Song" is immaculate, and there's just the right dose of pathos in the bargain.

On the basis of his vividly characterized, un-generically villainous, handsomely sung Mephistopheles, I've clearly undervalued Andrew Foster-Williams previously. He misses nothing in this devil without being the one who makes the unholy pact with him. Equally outstanding are Jean-Sebastien Bou's Valentin (who gets some marvelous music back) and Juliette Mars' Siebel, and the sense of ensemble among the entire cast and chorus is superb.

Predictably, Rousset has consummate grasp of the arc of the piece, and his ace band is not just blowing into and sawing at old instruments but relishing sonorities lost in today's opera pits and taking advantage of both the fleetness and vividness they afford. The all-around care evinced in this "Faust" amplifies the opera's importance and begs for a "Carmen"-like return to its original allures.