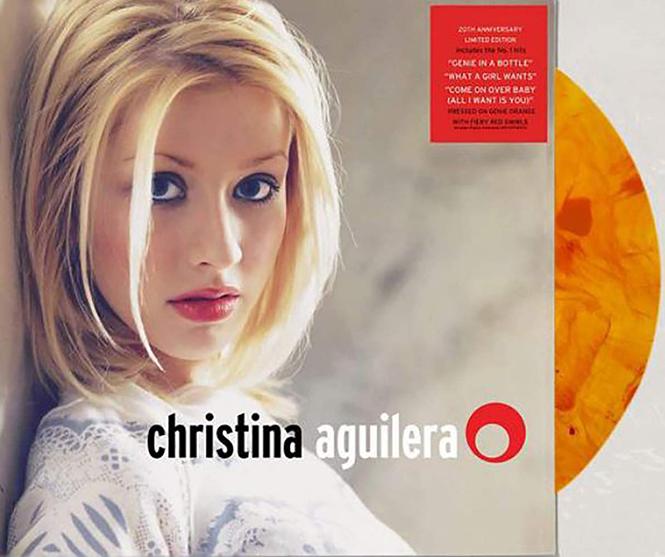 One of the best things about the vinyl revival is that albums initially issued on CD only, during the mid-to-late 1990s and through the early part of the 2000s, are finally getting the chance to be heard in the beloved, "warm" classic format.

Originally released in 1999, the eponymous debut by Disney-darling-turned-sex-kitten Christina Aguilera is now available in a 20th anniversary limited edition on vinyl "pressed on genie orange with fiery red swirls" from RCA/Legacy. Keep in mind this is before her Xtina transformation as she and the far inferior Britney Spears competed for the hearts and dirty minds of the music-buying public. On her debut album, Aguilera kept things relatively clean and focused on showing off her impressive singing abilities, which comes through on the hits "Genie in a Bottle," "What a Girl Wants" and "I Turn to You." The album features tunes by schmaltz queens Franne Golde and Diane Warren, as well as future plagiarizer Robin Thicke. It serves as a fine introduction to Aguilera, paving the way for what was to follow. The LP also includes a lyric sheet and a download code.

Also observing a 20th anniversary, Backstreet Boys' second studio album "Millennium" (Jive/Legacy) has been reissued in a collectible picture-disc edition, including a download card. The album, which contains the hit singles "I Want It That Way," "Larger Than Life" and "Show Me the Meaning of Being Lonely," suffers from soggy Swedish songwriting by Max Martin and others. To make matters worse, much of the material is indistinguishable from BSB's main rivals *NSYNC (why the asterisk and caps?). That probably has something to with the late sleazy swindler Lou Pearlman, who managed both boy bands.