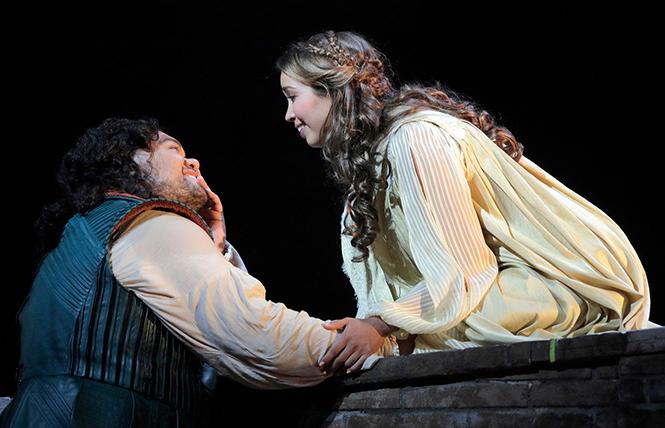 The San Francisco Opera's 97th season opened last week with a sturdy, often stirring performance of Gounod's elegant version of Shakespeare's "Romeo and Juliet." Packing five acts and one intermission into a Gala First Night may have diminished the impact, but nothing could hide the exciting back-story of an Adler Fellow who saved the day, or the fast-rising young soprano who found herself perfectly matched to a new role.

Samoan-born New Zealand tenor Pene Pati made his SFO debut as Count Lerma in "Don Carlo" in 2015. He added the major part of the lecherous Duke in "Rigoletto" to his repertoire later during his SFO Adler Fellowship (2016, 2017) and won good reviews. He has always shown promise, and the focus of a Merola Opera Program education helped focus his maturing artistry. Membership in the phenomenally successful New Zealand operatic/pop trio SOL3 MIO, which includes his brother Amitai (Merola 2016), boosts his social-media profile. Dubbed "a young Pavarotti" by an enthusiastic teacher, Pati has been well-positioned for prime time.

Soprano Nadine Sierra (Merola 2010; Adler Fellowship 2011, 2012) made her SFO debut in 2011 in the Company's World Premiere of "Heart of a Soldier." Her darling Musetta in "La Boheme" was especially memorable, and I have enjoyed watching her move rapidly to larger parts. She proved one of the redeeming features of a misbegotten "Lucia di Lammermoor" in the title role. Her silvery voice, with easy but firmly placed coloratura, is ideal for Juliet, and her unforced freshness and touching acting finish a lovely performance. Now that everyone can exhale at Pati's successful stepping-in, audiences attending later in the run will better appreciate her finely etched portrayal.

The incontestable triumph still belonged to Pati. His confident ownership of the role of Romeo was apparent from his first entrance. Maintaining a steady tone throughout, he was convincing in action scenes (kudos to fight director Dave Maier) and sailed with thrilling clarity over Ian Robertson's rich Chorus and conductor Yves Abel's occasionally muddy orchestra. He can also float a beautiful pianissimo. So what were we worrying about?

Once the title roles are secure, the rest of the opera should be a cakewalk, but Gounod gave some important moments to smaller parts, and director Jean Louis-Grinda (SFO debut) was lucky to have a solid cast at hand. At least, once the dust had settled. His sensible staging offered quick recognition of characters, and made them easy to identify in crowd scenes. In Shakespeare, that is no simple task. As Mercutio, American lyric baritone Lucas Meachem (Merola 2003; Adler Fellowship 2004, 2005) earned a big ovation. Bass James Creswell (Merola 2000) was warmly sympathetic as Friar Lawrence; baritone Timothy Mix was a mean-spirited Count Capulet; and tenor Daniel Montenegro (Merola 2010; Adler Fellowship 2011), as Juliet's testosterone-driven brother Tybalt, made a robust impression.

Bass-baritone Philip Skinner (Merola 1985; Adler Fellowship 1986, 1987) offered another strong SFO appearance as the Duke of Verona; and New Zealand baritone Hadleigh Adams (Merola 2012; Adler Fellowship 2013, 2014) was a standout, too. I mention Merola participants and Adler alums in particular to show the inestimable worth of the working education. SFO has created a remarkable reserve of excellent singing actors over the years, and this production offers heartening proof.

Making their SFO debuts, mezzo-sopranos Eve Gigliotti and Stephanie Lauricella were convincing as Juliet's nurse Gertrude and Romeo's page Stephano. The audience rewarded Lauricella with warm applause for her brief but pleasing aria in Act III.

If conductor Yves Abel had picked up the tempo more often, the long production would have moved better. Still, at its heart, "Romeo and Juliet" is a big, beautiful love duet, and Pene Pati and Nadine Sierra nailed it.