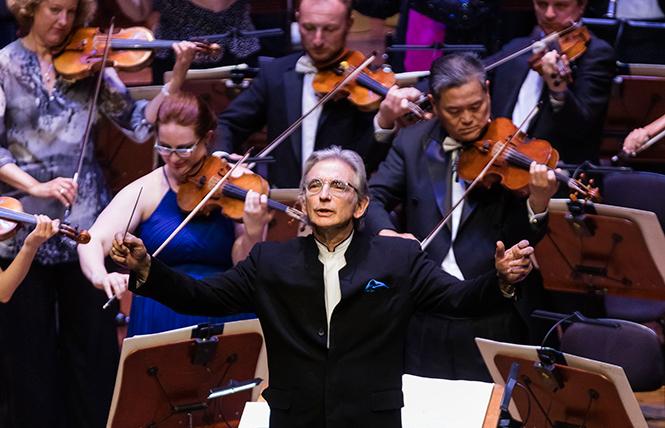 Entering from the rear, baton in hand, signature cobalt-blue silk sprouting from the pocket of a perfect tux, and promenading his spotlit way down the aisle, MTT came in more like star of a Vegas residency than conventional maestro, but it somehow felt totally right. More than internationally recognized musician, he is a teacher, composer, committed community leader, and a famously charismatic performer.

The SFS usually tempers the hedonistic spectacle of Opening Night with a cooling mixture of good taste and international chic. If the theatrics marking this year's celebration tended towards the grandiose, no one complained, and the event, dedicated to MTT and husband and longtime professional partner Joshua Robison, benefited the Symphony's many artistic, community, and education programs.

There will be many opportunities to savor MTT's legacy during the course of his 25th and final season, but let's start at the recent "MTT XXV" before looking back. After a full-voiced National Anthem, the orchestra launched into a zippy Overture to "Russlan and Ludmilla" by Glinka. It seemed somewhat tacked on, but these openers have adjusted to a winning formula: feed, drink, and seat them, then get them back to the party ASAP. Performing the Gala concert without intermission also proved a smart new idea.

Handsome, rich-voiced bass-baritone Ryan McKinny appeared for the first number in a set of two Aaron Copland "Old American Songs," "The Dodger" and "The Golden Willow Tree," which framed the World Premiere of SF philanthropist-composer Gordon Getty's arrangement of "Shenandoah." The man behind me said to his partner, "I didn't know he wrote that!" He did not, but he might have supplied the music paper.

Copland is one of the many modern composers MTT knew personally. Benjamin Britten was another. His Variations and Fugue on a Theme by Purcell, or more popularly, "The Young Person's Guide to the Orchestra," followed. We have heard the delightful piece on opening night before, but lighting designer Luke Kritzeck added nightclub-style illumination to each section this time. Effective and fun, and I have a feeling we will be seeing similar effects in the future.

The Finale: Ode "To Joy" from Symphony No. 9 by Beethoven couldn't have been more startling or appropriate as concert-closer. MTT pointed out Ludwig van B was not a composer he knew, but that didn't stop him from bringing the SFS and SFS Chorus (Ragnar Bohlin, director) together with soloists soprano Susanna Phillips, mezzo-soprano Jennifer Johnson Cano, tenor Jonathan Tetelman, and Ryan McKinny for a predictably thrilling if disjointed rendition.

But wait, there was more. The big finish to a really big show included a sweet hug between Michael and Joshua, a chorus line of California political, sports and civic leaders, and the audience. Everyone joined a big-hatted member of the cast of "Beach Blanket Babylon" in a heartfelt sing-along to "San Francisco" by Gus Kahn and composers Walter Jurmann and Bronislaw Kaper (yep, MTT knew him, too). With a confetti-shoot blizzard, the Pied Piper of San Francisco is off and running for his final victory lap around Davies Symphony Hall.