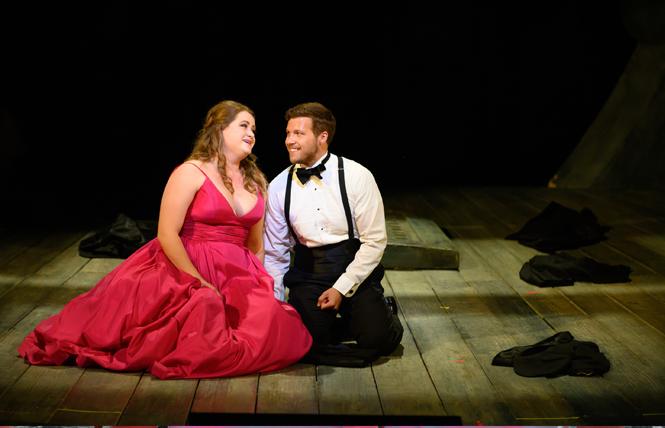 Instead of returning to campus this fall, the Merola Opera Program class of 2019 has already graduated from the organization's prestigious "summer school." A recent evening-long "commencement" concert at the War Memorial Opera House presented the 29 young artists, selected from over 800 applicants, in the Merola Grand Finale, the final event of the yearly Summer Festival. The gala, conducted by George Manahan and directed by 2019 Merola Apprentice Stage Director Greg Eldridge, offered the participants a closing opportunity to demonstrate the Program's inestimable worth.

Countertenor Aryeh Nussbaum Cohen (Merola 2016) is a fine example. He was first onstage at the concert, making a heartfelt opening statement about his own experience and thanking his mentors. He gratefully attributes the launch of his rocketing career to the high focus of Merola training.

Framing and flavoring the performance with a Shakespearean theme and some actual quotes, director Eldridge cleverly segued between musical styles. A few awkward stops robbed singers of applause, but the three-hour show moved briskly and looked surprisingly at home on the set of San Francisco Opera's upcoming production of "Billy Budd." The cross-section of HMS Indomitable was a little menacing as the Marschallin's boudoir in the opening segment from R. Strauss' "Der Rosenkavalier," but mezzo-soprano Cara Collins (Amarillo, TX), fresh from Merola's recent Heggie/Scheer commission "If I Were You," and soprano Anna Dugan (Cranford, NJ) still created an atmosphere of sensuous intimacy.

Mezzo-soprano Alice Chung (Loma Linda, CA) was an imposing Gertrude, giving sympathy to a difficult role, and baritone Timothy Murray (Whitefish Bay, WI), memorable from "If I Were You," brought matching sensitivity to Hamlet.

The packed program offered too many superior performances to describe. All of the talented participants distinguished themselves throughout the season, and no one is ever there by chance. The annual Merola Grand Finale sets the seal on well-deserved diplomas.