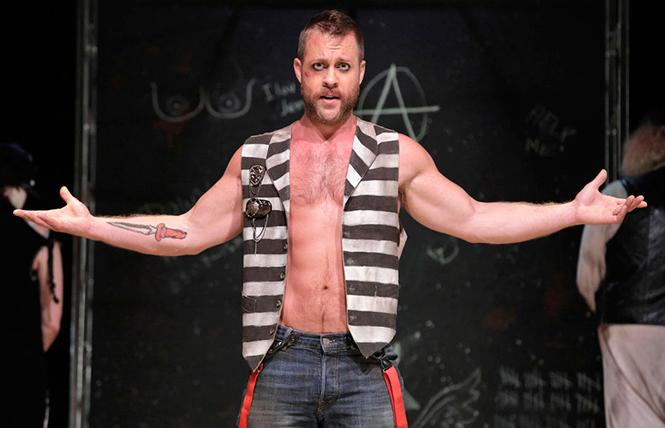 Challenged by production costs, complicated site procurement, and a problematical performance space, West Edge Opera Festival 2019 can still be called a success. Programming three shows and getting them up and running is no small feat, and if the first two productions varied in quality, the third, composer Missy Mazzoli's and librettist Royce Varek's "Breaking the Waves," opened to positive word of mouth.

The artistic leadership of General Director Mark Streshinsky and Music Director Jonathan Khuner has grown West Edge Opera (WEO) to an exciting brand, known for innovative productions that honor tradition and boldly break the rules. The not-for-profit started 40 years ago as Berkeley Opera, founded by Cal professor Richard Goodman, managed by Khuner from 1994-2009. Streshinsky joined in 2009, and the collaboration has guided the company through an amazing decade of wildly entertaining experiments staged in offbeat venues. 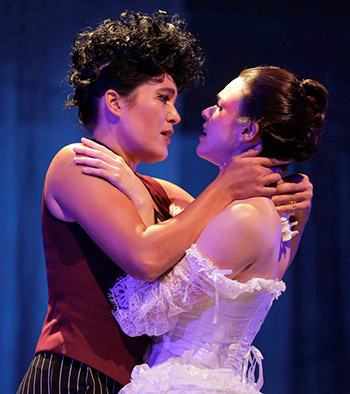 From the best spot at the abandoned 16th Street train station in Oakland, to cavernous Pacific Pipe Oakland and the better-suited but expensive Craneway Pavilion in the old Ford plant in Richmond, WEO has now landed at the Bridge Yard in Oakland. It is the least amenable site so far. Long, narrow, and high-ceilinged (open industrial beams), with poor ventilation and acoustics, it's a wonder the Festival managed to adapt. Free wine, beer, and an airy outdoor tent make a welcoming scene, but once inside, even close to the elevated stage, sightlines are bad, and ambient noise is intrusive.

The lack of intimacy was damaging to both of the first two operas, Brecht and Weill's "The Threepenny Opera" and Christoph Willibald Gluck's "Orfeo ed Euridice." I saw them in reverse order, and the numbing experience of director KJ Dahlaw's re-invention of Gluck's re-invention of 18th-century opera didn't make a good start.

"Reframing the Orfeo myth through a queer lens" was nonbinary director dance artist Dahlaw's intriguing intention, but there was little onstage that differed much, at least visually, from most productions that cast a mezzo-soprano as Orfeo. At least having nonbinary and women artists in control of the narrative offered present-day insight to the ancient story. Realization of any deeper meaning was less clear, blunted by amateurish dancing that was more distracting than expressive. The corps of six performed gamely in awful costumes, but energy alone couldn't enliven the direction. 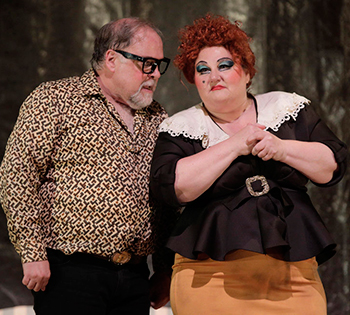 The new location did the usually inventive director no favors. Sitting in the stuffy air of a matinee performance pondering endless pages of spoken dialogue, the sold-out house faced a surprisingly sluggish show. The marvelous Weill tunes popped up periodically to wake us, but they only occasionally worked. Three hours with intermission seemed at odds with Brecht's incisive view of modern morality.

The settings were minimal, though Mack the Knife's London looked tacky enough in Christine Crooks' amusing costumes. Conductor David Moschler got the band off to a shaky start with a messy Overture. The multi-tasking musicians recovered and jammed idiomatically, as if playing in a pub or cabaret rather than a hangar. The singing actors faced the same odds.

Brecht and Weill's "opera for beggars" is a satire on the conventions of the genre as much as social manifesto. Pulitzer staged it with Brechtian agitprop style, but killed the acerbic and haunting musical in the process.

Tenor Derek Chester made his WEO debut as Macheath, offering some high-energy physicality. Despite heavy makeup and lewd posturing, he still came across as an amiable instead of nasty villain. Soprano Maya Kherani sang Polly Peachum with expected depth and warmth, but her listless acting proved unsympathetic.

West Edge Opera has already released plans for next summer's festival. Given its remarkable history of invention and adaptability, another season in Oakland near the East Bay landing of the Bay Bridge should still attract adventurous music-theatre fans.