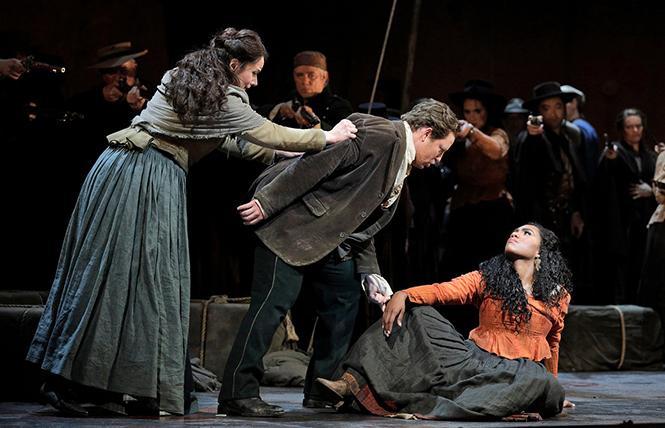 The latest revival of Bizet's "Carmen," which opened the San Francisco Opera's summer season last week, proves something we always knew. Whether presented as spectacle, psychodrama or tragic love story, all you really need is a strong musical production to tick the boxes.

That is the takeaway from the Company's sluggish mounting of director Francesca Zambello's attractive but curiously uninspired production, a co-production of SFO and Washington National Opera, originally created by Opera Australia based on the Royal Opera House Covent Garden and Norwegian National Opera co-production. Get it, got it? Good. Because it seems the wide usage of the template has removed some of the soul from the current revival.

Everything is in the right place, everyone hits his or her mark, and nothing goes wrong in a largely traditional enactment of a beloved work, but how can something so busy ultimately feel so static?

Zambello often fusses with crowd scenes, but she also self-edits, so most of the action is clear. The main characters disappear in the swirl of activity, but once they resume singing, there is no need to highlight them more.

Ian Robertson's SFO Chorus fills the stage with customary enthusiasm, but even the kiddies outside the cigarette factory and corrida look a tad too picturesque in their spotlessly appropriate costumes. 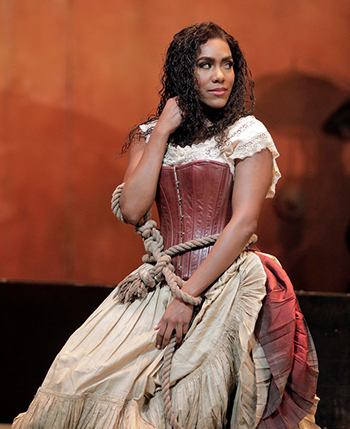 The last time "Carmen" played the War Memorial Opera House, audiences experienced the full frontal shock of a blazing re-creation of controversial Castilian director Calixto Bieito's down-and-dirty display of male-dominated humanity. Nudity and relentless machismo stressed the title character's environment and added brutal context for the drama.
Zambello has gone farther back to slant the character's motivations differently. Legendary director Jean-Pierre Ponnelle once added importance to the role of Micaela, but allowed the other characters little deviation from stock interpretations. It was interesting, and contrasted with a stereotypically willful Carmen, but did not amount to much more than smart detail.

Romanian soprano Anita Hartig, in her remarkable SFO debut as Micaela, hapless go-between for the dying mother of anti-hero Don Jose, is stronger and more forthright than usual. She greets the soldier outside his barracks with a kiss that clearly adds some tongue. We knew she wanted him for herself and has Madre's blessing, but the confused look on his face makes us wonder if part of his problem is virginity.

It fits with tenor Matthew Polenzani's sad sack characterization and soprano J'Nai Bridges' predatory portrayal of the title role. The concept works psychologically and is hardly out of line, but it does not allow for much chemistry. When Carmen aims her fateful rose at Don Jose, it lands next to him limply, and they don't even make eye contact. Guess she chose him because he was ignoring her. Guess he is seduced because she is so different from Micaela. When bass-baritone Kyle Ketelsen later makes an impressive entry on horseback, as bullfighter Escamillo, the next entry in Carmen's datebook is a no-brainer.
Depth of personality or motivation is not in the acting, though no one is unacceptably at odds with the scenario. There are some sparks of convincing life in dance master Lawrence Pech's choreography, but the drama really ignites when the cast is singing.
Conductor James Gaffigan is getting a high profile on both sides of Grove St., at the San Francisco Symphony and in his SFO mainstage debut. Leading the orchestra with a sure and energetic hand, he coaxes the loveliest of sounds and maintains thrust throughout the performance. Condensing four acts into two parts with one intermission helps, but Gaffigan makes sure none of Bizet's hit tunes misfires while building a strong narrative arc.
Kyle Ketelsen made his SFO debut in 2006 as Escamillo, and little has changed. He has kept the swagger and strong voice. It is easy to see why Carmen wants to score. Matthew Polenzani, making his role debut as Don Jose, is also an SFO veteran. The beauty of his voice is apparent, and if his acting is washed out, the passion of his emotions still emerges. A particularly fine rendition of the "Flower Song" brought the first big ovation of the performance.
Anita Hartig's Micaela responds to Zambello's spotlighting with confidence, but she almost steals the show because of her astonishing voice. Bright, warm, with gorgeously controlled vibrato, it's the perfect vehicle for Bizet's very French sound. Hartig's appealing attractiveness and sympathetic connection to character make Polenzani's Don Jose seem even more of a wuss.
Ah, Carmen: temptress, opportunist, and all-around hot-blooded dame. Victimized by milieu and gypsy superstitions, she lives life like a man and turns predator herself. She is hardly independent, but at least tries to live on her own terms. The myriad aspects of her character are fascinating, but J'Nai Bridges hones in on her strength without much insight to her vulnerability. Bridges brings her rich, expressive tone to fill in the blanks. Previous turns at SFO, notably in the role of Josefa Segovia in John Adams' "Girls of the Golden West," created the buzz for her deserved star turn. She triumphed on opening night.
Well-cast supporting parts included New York bass David Leigh's standout SFO and role debuts as Zuniga, alongside some very talented SFO Adler fellows. An audience member said, "Fun to find out where all those famous songs come from!" It's also good to remember why "Carmen" still endures.

In repertory through June 29. www.sfopera.org