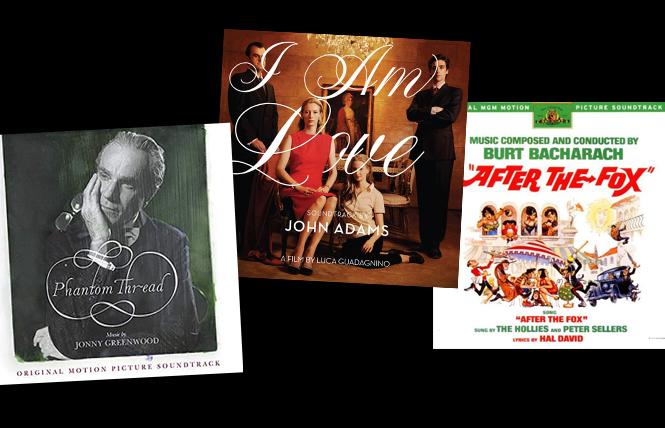 Some people collect stamps, some coins. Out There has always enjoyed collecting movie soundtracks, on LPs (yes, rekkids) and CDs. Over the years we've amassed a nice little collection of scores, mostly of classic films, but also of movies right up to the present day. Great thing about soundtrack recordings is that, yes, they feature the movie's signature theme and all its cloying variations, but there's also plenty of background music that works surprisingly well as a soundtrack for daily life.

Right now we're taking a few spins through "Phantom Thread" (Universal), music composed by Jonny Greenwood of Radiohead fame. It's music perfectly suited to its film, Paul Thomas Anderson's 2017 fictive character study of renowned dressmaker Reynolds Woodcock, his 1950s London milieu and his ways (or not) of romancing. We enjoy listening to the "Woodcock theme" and imagining we're Daniel Day-Lewis, jumping into his MG roadster and taking off into the English countryside when the philistines don't understand that "the eye must travel!" (to quote Diana Vreeland).

"I Am Love" (Nonesuch, 2009), soundtrack by John Adams. This was for a film directed by Luca Guadagnino starring Tilda Swinton that supposedly was very good. Never saw it, but the all-Adams score is a knockout, and the music works well as a soundtrack. Includes "The Chairman Dances" from "Nixon in China" (1985) and a chorus from "The Death of Klinghoffer" (1991).

Here are 25 more soundtracks from our collection. Unless otherwise noted, most are from a yummy series of "Original MGM Motion Picture Soundtracks" that include liner notes and vintage poster art related to the films.

"After the Fox," composed and conducted by Burt Bacharach, lyrics by Hal David, written by Neil Simon, starring Peter Sellers, directed by Vittorio De Sica, with Britt Ekland. If that's not enough boldface for you, the title song is sung by The Hollies.

"Annie Get Your Gun," tracks from both the film starring Betty Hutton and the aborted version that was to star Judy Garland.

"Best of the West," MGM soundtracks from great Westerns including "The Wonderful Country" (1959, Alex North), and classic themes from Elmer Bernstein and Jerry Goldsmith. "Like jazz, the Western is a uniquely American art-form."

"The Knack and How To Get It," composed by John Barry, very "Swinging London."

"The Living Daylights," Timothy Dalton's sole turn as 007. Someone we know dated him.

"Never on Sunday," composed by Manos Hadjidakis. OK, that earworm, but the rest is lively Greek music.

"Some Like It Hot," the famous numbers, zaftig Marilyn, also a background score.

"The Thomas Crown Affair," one of the classic film scores, composed-conducted by Michel Legrand.

Finally, a triad: "A Single Man," "The Talented Mr. Ripley," "Wall-E," which begins, "Out There, there's a world outside of Yonkers!"

The SF LGBT Center hosts an evening with Merola Opera Program on June 26, performing selections from the new opera "If I Were You."

"The new commissioned opera is a contemporary story of identity with echoes of classic literature, from Faust to Jekyll & Hyde," say press materials. "Composer Jake Heggie and librettist Gene Scheer envision a work in which many of the Merola Opera Program's young singers have the opportunity to be the lead as Fabian's soul and music move from one character to the next.

"Fabian Hart, an aspiring writer who yearns for a way out of his stifling existence, would sell his soul to be somebody else. Brittomara, the devil, offers him a supernatural power. By singing a secret phrase, Fabian will be able to transfer his soul into another person's body and live their life. Thus begins the perilous journey of 'If I Were You' as Fabian moves his lost soul from person to person in search of a more fulfilling identity."