Awakening to the glories of 'Saul' 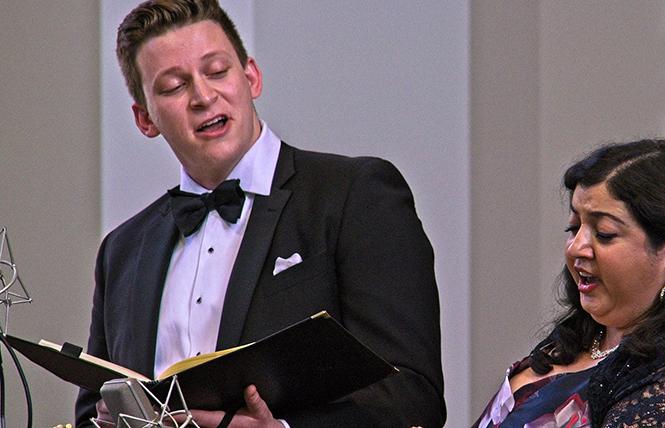 George Frideric Handel and countertenors are enjoying an unexpected renaissance these days. We're not just hearing the annual "Messiah" but many of the other great oratorios and operas, with high male voices reclaiming parts often given to mezzos and contraltos.

Renewed interest in "authentic" performance practice and a wealth of high-quality countertenors — arguably, more than at any other time in modern history — are awakening listeners to the glories of "Orlando" (set for San Francisco Opera, summer 2019), "Partenope" (SFO revival summer 2020), and most recently, "Saul." Rising star countertenors, like first freshman to win Princeton University's Handel Singing Competition in 2012 Aryeh Nussbaum Cohen and breakdancing champion Jakub Jozef Orlinski, are getting their rightful places on stage back.

Philharmonia Baroque Orchestra & Chorale ended its 38th season with performances in the Bay Area and Los Angeles of Handel's splendid Biblical oratorio "Saul." At jewel-box Herbst Theatre in San Francisco, PBO Music Director (and period performance expert) Nicholas McGegan took the podium to finish his next-to-last season, and led a brilliant cast in an exciting performance of the fascinating three-act work. In the role of young David, Aryeh Nussbaum Cohen wasn't trying to steal anyone's thunder, but he was certainly a memorable standout to listeners who may have been hearing him for the first time.

His career is moving at dazzling speed. Merola Opera Program, current Adler Fellowship, Grand Finals Winner of the Metropolitan Opera National Council Auditions, and First Prize Winner and Audience Choice Winner of the 2018 Dallas Opera Guild Vocal Competition number in his early accomplishments. There are additional prestigious honors, awards, and grants, including a future starring role as Medoro in Handel's "Orlando" at the San Francisco Opera in June.

The sheer beauty of his tone, strong, pure, and smoothly rounded, is perfect for the expressive airs in "Saul." As David, lamenting the loss of his beloved friend Jonathan, he brought intense feeling to his grief. Heroic and seductive at other points in the story, he was also dramatically convincing as a youthful hero who could provoke self-defeating doubt and jealousy in the increasingly deranged title character.

Petulant and conflicted, with remarkable reserves of cavernous bass-baritone fury, Canadian Daniel Okulitch brought complexity and depth to his portrayal of Saul.

Handel and his librettist Charles Jennens collaborated on "Messiah" four years later with a scriptural text compiled from the King James Bible. The characters in "Saul," freely borrowed from the Bible story, are mostly two-dimensional springboards for the composer's vivid imagination. Nic McGegan added back-story and personality with his subtly effective stage direction and, most importantly, with dramatic orchestral support.

He also assembled a marvelous cast, equally adept at adding theatrical credibility to their parts. Sopranos Yulia Van Doren and Sherezade Panthaki beautifully contrasted as Saul's daughters Merab and Michal, and tenor Aaron Sheehan, very sympathetic as Jonathon, made a potentially confusing plot easier to follow. The complete libretto in the luxurious program helped, too.

Van Doren's lovely, clear voice contains a hint of warming vibrato. Panthaki's darker tone is liquid and full, and her spontaneous facial expressions were amusing. They both are capable of fetching and genuine trills. Aaron Sheehan's airy tenor is also skillfully at ease with Handel's vocal demands.

In smaller parts, current SFO Adler Fellow bass-baritone Christian Pursell was impressive, as both Saul's errand-runner Doeg and the gloomy ghost of the prophet Samuel. In three roles, tenor Jonathan Smucker gave varied personalities to Abner, an Amalekite, and most dramatically, the Witch of Endor in a Count Dracula cloak. Constantly working with various Northern California musical organizations, he is a longtime member of the Philharmonia Chorale, under acclaimed Director Bruce Lamott.

The formerly dead acoustics of the elegant Herbst auditorium have noticeably improved since the Theatre's renovation, but positioning the Chorale at the back of the stage was still something of a gamble. From the thrilling opening chorus "How excellent thy name" to the closing "Gird on thy sword," the 26 professional singers resonated triumphantly, sailing easily over McGegan's big and expertly detailed orchestra.

Special mention must go to Jory Vinikour's tasteful organ continuo and his delightful keyboard glockenspiel solo (Wolfgang Amadeus of "The Magic Flute" would have been chuckling in appreciation), and Hanneke van Proosdij, who added her softly virtuosic touch on the harpsichord.

There is more Handel and another star countertenor slated for McGegan's last year as Director. The self-proclaimed "soon-to-be-bionic maestro" (he has hip surgery scheduled) is leading "Eternal Source of Light Divine," alternative title for the "Ode for the Birthday of Queen Anne" in Oct. 2019; "Judas Maccabaeus" in Dec. 2019; and, as part of PBO's Special Event Series in early 2020, "Aci, Galatea e Polifemo," with extraordinary American countertenor Anthony Roth Costanzo.