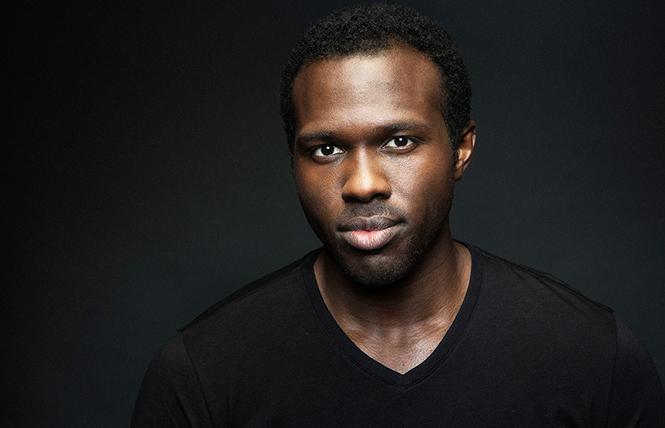 Joshua Henry: "It never occurred to me that there were parts I couldn't do." Photo: Jason Goodrich

"It's been a while now, but I really stumbled into the world of musical theater," says Broadway star Joshua Henry, who plays the Bay Area Cabaret series at the Venetian Room on April 28. "So I'll be doing lots of showtunes. But not in the way they're usually done. I like to bring some of the feeling of music I grew up with — Sam Cooke, Otis Redding, Marvin Gaye, Stevie Wonder — to Broadway songs."

The first time many San Franciscans saw Henry perform was two years ago when he played Aaron Burr on the original "Hamilton" tour, but the very first role he stumbled into was Harold Hill, in a Florida Bible Christian School production of "The Music Man." You know the part, played in various productions by Robert Preston, Matthew Broderick, and Eric McCormack, with Hugh Jackman in the wings for a Broadway revival next year. And you know the show: cornfed, apple-cheeked, Iowan. As they might say in River City, "White with a capital W."

But Henry, the son of Caribbean immigrants, had no preconceptions. "I'd never been to a musical, and this was the first one our high school ever did. To me, this fast-talking salesman was such a fun character. And the show has such beautiful songs, like 'Til There Was You.'"

During rehearsals, the school's vocal music teacher Birgit Fioravante pulled Henry aside. "She told me she thought I could actually do this for a living. That was a huge blessing," Henry says in retrospect. "And having started with that role in that show gave me a limitless foundation. It never occurred to me that there were parts I couldn't do. I went off to study theater at the University of Miami feeling I could play literally anything." Ironically, Henry's last college role before graduation was another turn as Harold Hill.

Fioravante, who still coaches Henry when he prepares for new Broadway roles, helped him prepare his college audition materials, but she couldn't prepare him for total immersion in theater geekdom.

"It was a complete backwards scuba dive," Henry recalls. "When I got to college I really had to put my head down. After doing the 'Music Man,' I'd gone to see 'Rent,' which was so jarring. But that was it. I would spend nights in the library listening to cast albums."

In 2007, a year after graduating, Henry was cast in the original Off-Broadway production of "In the Heights," where he first connected with future "Hamilton" creator Lin-Manuel Miranda. That show's transfer marked Henry's Broadway debut, quickly followed by a string of additional main-stem productions, from Green Day's "American Idiot" to his Tony-nominated turn last year in "Carousel."

From Harold Hill to "Carousel"'s Billy Bigelow, Henry has triumphed in roles not traditionally cast with black actors. But Henry also expresses great pride, "I've also had the chance to embrace who I am in African-American musical theater."

His first two Tony nominations were for his leading role in "The Scottsboro Boys," Kander and Ebb's critically admired takedown of racial oppression in the American legal system, and as Flick, the black soldier and romantic hero who can see beyond the superficial in Jeanine Tesori's "Violet." In 2016, Henry was among the starry cast of the George C. Wolfe/Eubie Blake musical "Shuffle Along," which also included Audra McDonald, Billy Porter and Brian Stokes Mitchell. Stokes Mitchell originated the canonical Broadway role that Henry says he'd most like to play, "Ragtime"'s Coalhouse Walker.

While a latecomer to musical theater, music has always been central to Henry's life. Growing up in Miami and attending culturally mixed schools, Henry was exposed to a huge variety of styles. "The city had a real melting pot of reggae, Puerto Rican music, Haitian sounds. My first-grade class had Chinese kids, Caucasian-Americans, a Saudi Arabian kid. Having all of this around made me curious and I think more empathetic.

"My Dad had this dusty old guitar in the garage that I started to play when I was 12. I'm self-taught, don't even use a pick. And I'm obsessed with it. There are two dark spots on my right thumb that don't have any feeling.

"I've always dreamed of being a solo music artist," says Henry. While he has no plans to leave Broadway behind, he is now working on an album of original songs.

He and his wife Cathryn have a one-year-old son, Samson, so his current break from eight-shows-a-week is a welcome opportunity for Henry to spend time with family. "When Samson is napping, I'm really into Anderson Paak, Janelle Monae, H.E.R., Childish Gambino.

"It's so funny being in the musical theater world but also having this full-on love for popular music. I got to go the Grammys this year because 'Carousel' was nominated for best cast album. And I'm sitting there with ["Dear Evan Hansen" composers] Justin Paul and Benj Pasek, ["Hamilton" arranger] Alex Lacamoire and all these other Broadway people, and we're just jamming out to all these other artists.

"My album will be a more pop-sounding venture, but what I've gotten from Broadway is the idea that the songs should tell great stories."