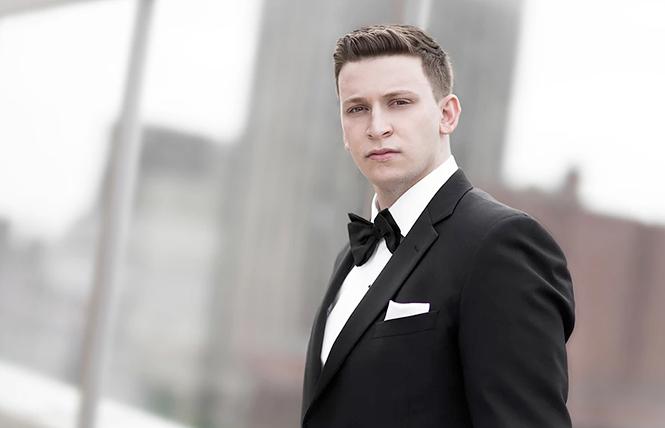 It's spring, and the Giants are back in Oracle Park. But sports fans are arts-lovers, too, and Philharmonia Baroque and the San Francisco Symphony are also drawing crowds to Herbst Theatre and Davies Symphony Hall to cheer musical players in damp and drizzly April.

Philharmonia Baroque Orchestra & Chorale (PBO) recently announced "Reflections 2019-20," programs and events scheduled and designed to look back on and celebrate the legacy of Music Director Nicholas McGegan, who is stepping down at the end of the season. Commissions, Grammy Award-winning performers, the West Coast Premiere of the praised NY production of Handel's "Aci, Galatea e Polifemo" with star countertenor Anthony Roth Costanzo, and a fully staged production of Leclair's "Scylla et Glaucus," which PBO will take on tour to Versailles, highlight McGegan's versatility and expertise over more than 35 years on the podium.

For now, PBO ends the current season with an exciting presentation of Handel's magnificent oratorio "Saul." At Davies Hall, the SFS powers through April with three guest conductors and three stellar guest pianists.

"Saul" will tour to LA's Disney Hall on April 10, but finishing the run are performances Fri., April 12, 7 p.m., Herbst Theatre in San Francisco; and Sat., April 13, 7:30 pm, First United Methodist Church in Palo Alto. The PBO debut of countertenor Aryeh Nussbaum Cohen as David in "Saul" has created extraordinary buzz. He is breaking out on the national scene and has even made his Vienna debut, but Bay Area audiences can claim an exciting early star-sighting. The minute he appears, that unmistakable quality is clear. His participation with the Merola Opera Program 2016 and subsequent selection as a 2019 Adler Fellow alerted everyone to an exceptionally promising talent.

The countertenor voice may be an acquired taste to many listeners; the adult male alto voice, either natural or falsetto, is often an acquired range for many singers with a higher vocal register, but Aryeh has been a true countertenor from the get-go. The uncommon strength and soulful expressivity of his remarkable instrument may well stem from his seven years serving as a cantor for High Holiday services at a Conservative synagogue, starting when he was just 15.

If anyone is destined to win new fans for countertenors, place your bets on the Brooklyn-born kid who won the Metropolitan Opera National Council Auditions in 2017, and prestigious awards from the Richard Tucker Music Foundation and the George London Foundation. He makes his San Francisco Opera debut this summer as Medoro in Handel's "Orlando."

The subtle auditioning of conductors at Davies Symphony Hall ended when Esa-Pekka Salonen was announced new Music Director of the San Francisco Symphony, beginning in 2020. The brilliant choice has satisfied just about everyone, but MTT still has one more season to go, and the parade of accomplished guest conductors continues at DSH.

Young continues the fairy-tale theme started by Boreyko with Rimsky-Korsakov's irresistible "Scheherazade." It may be one of the world's most familiar classical hits, but like the fabulous storyteller, it is worth 1,001 listens.

James Gaffigan leads concerts April 25-27 that include Mozart's delightful Symphony No. 31, "Paris" (his first to include clarinets), Wagner's "Good Friday Spell" from "Parsifal," and Samuel Barber's Neo-Romantic Symphony No. 1. If you thought he was a one-hit wonder with the famous Adagio, prepare for a bracing surprise.

Poetic, adventurous, and technically dazzling pianist (and noted animal conservationist) Helene Grimaud has been compared to the iconoclastic Glenn Gould for her willingness to explore unconventional practice. She performs Beethoven's Fourth Piano Concerto in her welcome return to DSH. Expect her instinctive taste to yield fresh results.