Striking out for Santa Fe 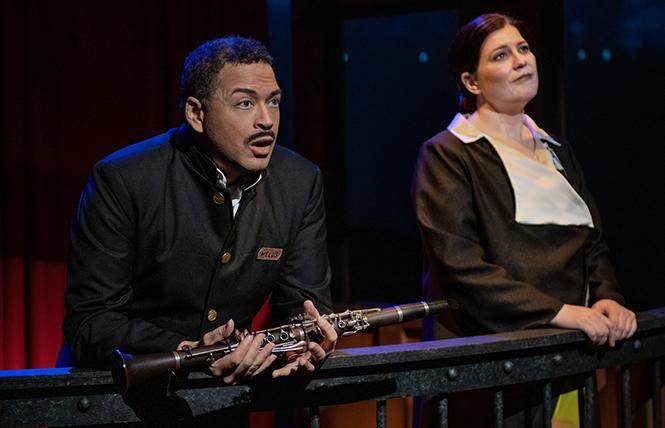 A new chamber opera based on an incident in the life of painter Georgia O'Keeffe premiered last week at Z Space in San Francisco. "Today It Rains," the first full-scale work co-commissioned by adventurous Opera Parallele with American Opera Projects, received an imaginative production that emphasized a strong score and thought-provoking story.

Composer Laura Kaminsky has written haunting music for the 90-minute opera in one act, which chronicles a train ride O'Keeffe took in 1929 with her friend and fellow artist Rebecca "Beck" Strand, from New York to Santa Fe. Librettists Mark Campbell (he came up with the original idea) and Kimberly Reed tell O'Keeffe's personal journey in flashbacks and dreams, adding a made-up character who validates her decision to strike out on her own, far from pretentious Manhattan and her exasperating husband, famous photographer Alfred Stieglitz.

The train porter Aubrey Wells, charmingly portrayed by tenor Nathan Granner, allows composer Kaminsky a chance to show her jazz chops, and provides a neat plot device that unfortunately backfires. While practicing the clarinet on the train's caboose, Aubrey shares his own philosophy with the emotionally torn artist, moving her to an affectionate kiss. He quickly departs, saying it could get him lynched. It is chillingly true and puts O'Keeffe's agonized soul-searching into stark relief. She may be colorblind, but she should know better. Instead of acknowledging the profound gap between them, the scene ends with her returning to her own predicament and reaffirming her decision to leave Stieglitz.

A little snipping could fix the misstep, and the opera arrives optimistically in the high desert regardless. Most of the scenes portray the freethinking woman's progress to liberation successfully, and touches of witty banter ease the mood of unremitting introspection.

Baritone Daniel Belcher, as Alfred Stieglitz, created a complex portrayal that explained some of his wife's ambivalence and depicted his own turmoil. He was a not-unsympathetic, talented artist himself who recognized O'Keeffe's importance, but found it hard to move past the role of domineering husband.

Mezzo-soprano Blythe Gaissert navigated the arduous central part of Georgia O'Keeffe with a mixture of flinty determination and confused vulnerability. Her extended arias were stand-alone scenes themselves, and when she stepped off the train at the end, her epiphany was convincing.

"Today it rains" comes from a heartfelt goodbye O'Keeffe wrote to Stieglitz. The subtlety of its meaning makes a fitting title for an opera that touches briefly, but with insight, on many relevant aspects of a great artist's life.

"Trial by Jury" was one of the earliest successes of the fabled partnership, which launched the series of 13 collaborative works that came to be known as the Savoy Operas. Full of typically hummable Sullivan melodies and bitingly satirical lyrics by Gilbert, the preposterous plot of the one-act operetta is also pure G&S.

A jilted bride, surrounded by bridesmaids, sues her ungentlemanly fiancé for reparations before a leering judge, an officious windbag foreman, and a contentious jury. Poking lighthearted fun at the Brits, the war between Mars and Venus, and the general human condition is the lifeblood of the Lamplighters, and the Company is fleshing out the bill with another one-act concoction that takes aim at "Trial by Jury Duty."

Beautiful costumes and production values, superb unamplified singing, and live orchestra are Lamplighters traditions. If you "get" English humor and like a catchy tune, you should appreciate their divine drollery.