More queers for your ears 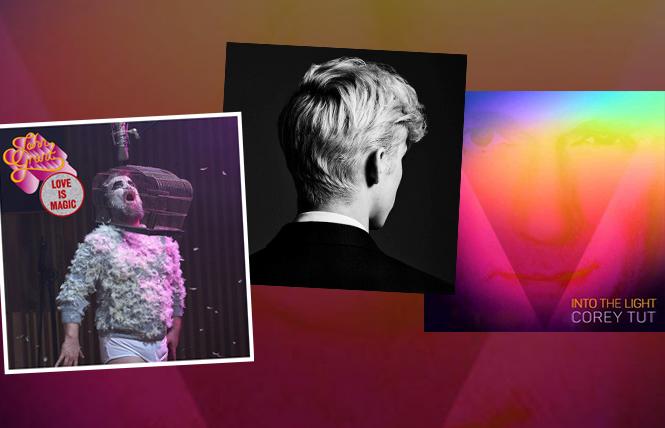 Queer male musical acts such as Perfume Genius, Car Seat Headrest, Shamir and John Grant are proving that there's more to gay men's listening habits than disco and show tunes. A founding member of the highly regarded 1990s-00s band The Czars, Grant's solo output is alternately challenging and approachable. His latest, "Love Is Magic" (Partisan), falls somewhere between the accessibility of 2013's "Pale Green Ghosts" and 2015's slightly difficult "Grey Tickles, Black Pressure." Grant is known for his lengthy and varied songs, and he doesn't disappoint here. "Metamorphosis" shifts gears like a car on an inclining road. The title cut, in which Sade gets name-checked, casts a spell. "Tempest" suggests a queer arcade game, and the sexy electronics of "Preppy Boy" deserve to be a standard at tea dance. "He's Got His Mother's Hips" adds serious funk to the mix. "Touch and Go" is the most beautiful song Grant has recorded since "GMF."

Gay singer-songwriter-actor Troye Sivan made an indelible impression with his 2015 debut album "Blue Neighbourhood." His second album "Bloom" (Capitol) effortlessly delivers on the promise of the first. Sivan and his producers employ an assortment of studio wizardry, but the good news is that the songs, all co-written by Sivan, are solid enough not to be overpowered. Opener "Seventeen" will speak to any LGBTQ folks who knew they were queer from an early age. "My My My!" and "Dance to This," featuring Ariana Grande, are sexy dance numbers. "What a Heavenly Way To Die" and the title cut are worth mentioning.

Talent show competitor Calum Scott's exquisite reimagining of Robyn's "Dancing on My Own" as a ballad hinted at his great taste in music. That song, as well as a reading of Bob Dylan's "Not Dark Yet," can be found on Scott's full-length debut album "Only Human" (Capitol), newly reissued in an expanded edition including five bonus tracks. They demonstrate his interpretation skills and his vocal abilities. The guy can sing! The original songs (co-written by Scott and collaborators), including the Leona Lewis duet "You Are the Reason" and the rhythmic "Give Me Something," tend to be in the Sam Smith category, and Scott distinguishes himself in that realm. Among the new tunes, the coming out number "No Matter What" is nothing less than stunning.

On "Vital" (Wanderlust/Hollywood), gay pop singer-songwriter Morgxn sounds like he wants to be the stateside version of Troye Sivan. But his cover of The Cure's "Boys Don't Cry," which closes the album, does show an unexpected side to the artist. Morgxn gets our pulse racing with dance-oriented cuts "Translucent," "XX" and "Harpoon (How Does It Feel)." "Me Without You" and "Carry the Weight" incorporate some tech.

The Corey TuT of 2018's "Into the Light" (coreytut.com) is a far cry from the Corey TuT of 2013's "Chasing Down the Bedlam." TuT has set aside his edgy rock sound and traded it for a musical style geared towards dance. The clubby title cut gets things moving. You can hear the influence of Madonna's recent output on "Automatic." "Hey There Superman" elevates things, while "Everything & Nothing" and "Too Much" have a retro disposition. The six bonus tracks, including the luminous "Sparks" and "Hands" (featuring gay basketball player and musician Will Sheridan), keep the party going into the late hours.

Nine albums into his recording career, Logan Lynn's "My Movie Star" is his most ambitious project to date. The oversized package consists of the 10-song album on the first disc and a second disc of remixes, as well as other artists covering his songs. With the exception of the title cut, the songs, co-produced by Lynn and Jay Mohr (yes, that Jay Mohr!), were co-written by Lynn and piano sensation Glasys. This album is a new and unexpected direction for Lynn, perhaps best-known for his electronic music stylings. Among the cover versions on the second disc, the rendition of "Big City Now" by Tiffany (yes, that Tiffany!) is a must.

Gay crooner Spencer Day is sort of our very own queer Michael Bublé. Backed by the 20-member Budman-Levy orchestra, Day goes for a film noir vibe on his new album, the Los Angeles song cycle "Angel City" (spencerday.com). It's a good fit for Day, who co-wrote all of the songs, including standouts such as "The California Yes," "Ghost of the Chateau Marmont," "I Wish I Didn't Care" and "Somewhere There's a City."

If Day is our gay Bublé, out singer-songwriter Mike Maimone is our Tom Waits. "The High Hat Club" (mikemaimone.com) is a five-song EP that leaves us wanting more. Maimone's piano-playing is mind-blowing, his vocals exude enough warmth to start a blaze, and his word play, especially on "Hey Now" and "Clear Black Night," is unforgettable. "Through the Changes" is a full-fledged heart-string-tugger. If the bear crowd doesn't gobble Maimone up with a spoon, we are all doomed.