Do we hear a waltz? 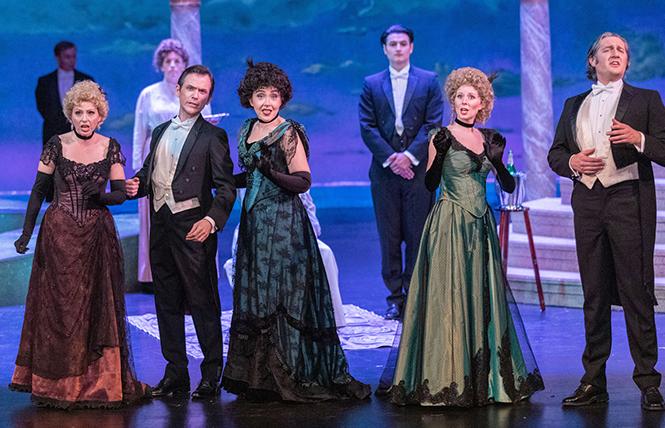 Stephen Sondheim's "A Little Night Music," inspired by an Ingmar Bergman movie, endures as one of his most successful shows. It's that "Send in the Clowns" musical, as marketers are quick to remind, with an amusing book by Hugh Wheeler that perfectly suits the composer's knowing wink at Mozart and the frothy conventions of classic operetta. San Francisco's Lamplighters Music Theatre, world-renowned purveyor of Gilbert & Sullivan, has stepped outside its staple repertoire with a lush revival, currently in a four-city run, which ends this weekend at Mountain View Center for the Performing Arts.

Catching the new production in a Super Bowl Sunday matinee at Yerba Buena Center for the Arts Theatre in San Francisco offered an elegant alternative to nachos and beer. The Lamplighters were serving champagne and caviar instead, to a house packed with Stephen Sondheim fans.

The connection between Sondheim and G&S seems fairly obvious, but the dyspeptic old genius has actually expressed an indifference to the legendary pair. Never mind, Sondheim and W.S. Gilbert share a gift for patter songs and parody, and he has made catty remarks about Oscar Hammerstein, Noël Coward, and Lorenz Hart, too.

We give him a pass for the grouchy opinions. The virtuosity of his own invention has earned him a special place in the wordsmith's hall of fame. And, contrary to some critics, his music is full of catchy tunes and haunting expressivity. The Lamplighters and Stephen Sondheim is really a match made in operetta heaven. Hearing a cast of accomplished singer actors actually sing the lilting "Night Music" score in the rich Jonathan Tunick orchestrations is reason enough to attend, but the Lamplighters' commitment to high production values sets the seal on a satisfying revival.

A quintet of liebeslieder singers — Amy Bouchard, Elana Cowen, Amy Foote, Jonathan Smucker and Chris Uzelac — starts the music, vocalizing the nostalgic Overture with refined sophistication. They return frequently as an urbane Greek chorus, commenting on and participating in the action. 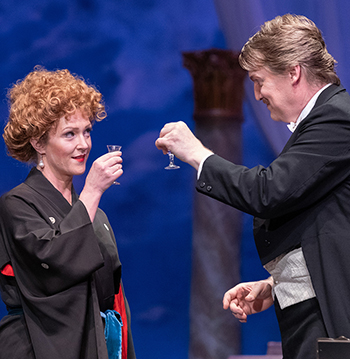 The Night Waltz that follows introduces players in the masque as the full Lamplighters Orchestra swells sonorously to Conductor/Music Director Karl Pister's lead. His attention to detail and sympathetic support bring fresh insight to the subtleties of the score.

Like Bergman's "Smiles of a Summer Night," Wheeler's libretto focuses on the endearing humanity of the characters, gently observing their anxious and often comical attempts at finding love on Midsummer's Eve. The young, middle-aged, and old are humorously examined, but director Lickteig permits contemporary attitudes towards social inequalities between genders and classes to show through. Adultery, female subservience and macho bullying are mined for laughs like most romantic farces, but this "A Little Night Music" is more than the sum of its pleasurable parts. Each memorable song gets the deluxe treatment, and "A Weekend in the Country," the intricate Finale to Act I, would have Sondheim himself chuckling at his cleverness.

Jennifer Ashworth stands splendidly at the center of the plot as the famous actress Desiree Armfeldt. Her carefree approach to career and other women's husbands is wearing thin, and she's ready to settle down with her adoring daughter Fredrika (sweet and pure-voiced Ella Bleu Bradford), retired courtesan mother Madame Armfeldt (a regally jaded Barbara Heroux) and lost love Fredrik Egerman, portrayed with droll understatement by Robby Stafford.

Secondary roles are vividly portrayed by Cary Ann Rosko as Anne's friend, the disillusioned Countess Charlotte, married to military peacock Count Carl-Magnus, who openly philanders with Desiree. William Giammona is funny and convincingly pompous as the selfish louse, but Rosko wins compassion as she stands by her man, dishing out sarcastic zingers.

As Petra, the Egermans' saucy maid, Lindsay Stark voices the show-stopping "The Miller's Son" in Act II. The song celebrates making the most of circumstances, and Stark belts it with full-throated enthusiasm and a touch of rueful wisdom.

When the final curtain falls, the clowns have all been sent in, and everyone has received a smile from the summer night. G&S couldn't have tied it up better. It's "The Marriage of Figaro" meets Anton Chekhov meets Ingmar Bergman. Sondheim and Wheeler's entrancing musical fusion has become another jewel in the Lamplighters' crown.