Getting personal with Steve Grand 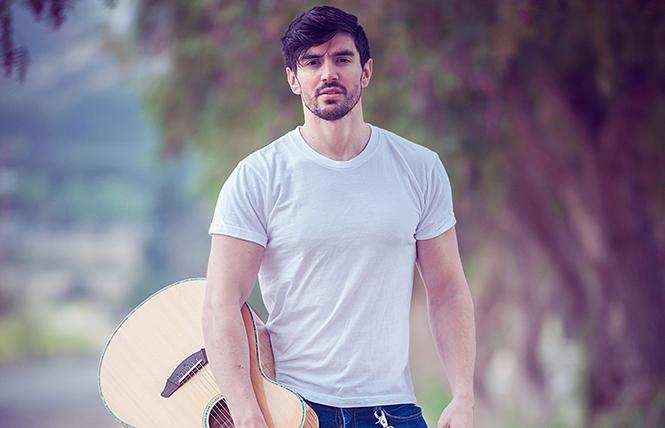 Steve Grand: "There's no one above me to tell me no." Photo: William Dick

Steve Grand will be performing at Feinstein's at the Nikko on Feb. 20 & 21. The openly gay singer-songwriter will present "Up Close and Personal," a show in which he'll sing songs from his new album "Not the End of Me," as well as songs from his debut album, "All-American Boy."

Grand is a self-made success story. In 2013 the video for the "All-American Boy" single went viral, landing Grand on "Good Morning America" and CNN. During these first interviews he talked about how difficult it was for him to come out to his parents during high school. He soon found himself included in Out magazine's "Out 100" list, and is now an advocate for LGBT equality. His first full-length album was self-financed through a successful Kickstarter campaign, and both albums are self-distributed through Grand Nation, his own label.

"Being my own boss has been a challenge for me," Grand told the B.A.R. "On one hand, you have all the flexibility you want. But you have to be very disciplined and try to structure your time. That's something I struggle with. It's also a lot of pressure on me." But being an independent artist also has its rewards. "I can create whatever I want, and there's no one above me to tell me no."

The "All-American Boy" video shows Grand sitting around the fire with his friends as he watches his buddy, whom he's secretly in love with, making out with a girl. When the two guys go swimming together, Grand kisses his friend and is harshly rejected. Grand was labeled a country musician after the song's release.

Coming to terms with his sexuality wasn't easy for him or for his family. He was brought up in a community, family and religion at odds with that part of himself. His parents didn't understand him, but he always thought they were doing what they believed what was best for him.

"Like many parents do, they finally came around, and now we have a really solid, loving relationship," he said. "I think being our open, honest selves is always the most powerful thing any of us can do. Just being visible goes a long way, though it's not everything. The other part is being decent, compassionate people who are also open and honest."

Like his earlier work, Grand's new album is very much a one-man show. He wrote the music and lyrics, did most of the production, and even did the artwork for the album.

"It really is a genuine piece of me," he said. "I wrote most of the songs over the last two years. A lot of the album deals with the inner turmoil I've faced over that time, but what I really want people to take away from this record is a sense of resilience — that no matter what you go through, you can make it through, and often the challenges you face in life will make you better and stronger."

When he takes to the stage at Feinstein's, Grand will be singing and switching between his guitar and the piano. In addition to songs from both of his albums, Grand will perform songs from Queen, Elton John, Neil Young and Lady Gaga.

"It's going to be a night of great live music," he said. "I want the audience to feel like they're friends in my living room, listening to me play and talk about music that I've written, and music that has moved me throughout my life."