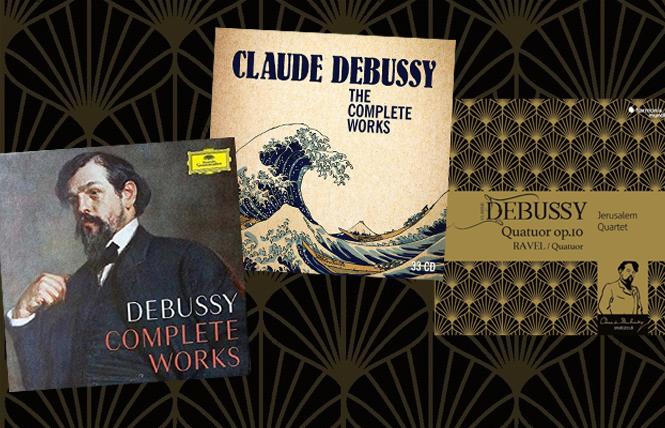 His music may seem to say otherwise, but Claude Debussy came to a bitter end of an ill-tempered life begun in poverty and ended in complications from rectal cancer. Honoring the centennial of his death on March 25, both Warner and DG issued boxes of "Complete Works," an oddly competitive pair about which a blunt summary suffices: You get what you pay for. Warner's less expensive set comprises 33 CDs, and DG's nearly double-the-price offering contains 22. Don't ask.

Other considerations are more important. Both sets include important historical recordings, some no longer available elsewhere. True completists may have to have both sets, not in order to have everything but to have a fuller range of interpretations, Warner generally favoring older recordings. The conundrum will be the usual: people who want a Debussy complete works likely already have many or most of them.

DG offers the two versions of Debussy's opera "Pelleas et Melisande" in both audio (Abbado studio) and video (Boulez/Welsh National Opera), contenders for the best versions in both formats. While both sets spread the piano works among numerous keyboardists (Warner wisely favors Youri Egorov), DG does so more surprisingly. Krystian Zimerman's recordings of the Preludes have long been the reference set, yet DG turns to Pierre-Laurent Aimard, a different but hardly lesser voice. And for the Suite Bergamasque there is one of its newest artists, Seong-Jin Cho, who released an all-Debussy CD this year. With his luminous performance of "Clair de lune" you'll hear why he's awarded what may be Debussy's single most famous composition. Bar lines and meter marks dissolve in floating shapes and hues.

Still, it wasn't until the end of the calendar year that the most important, coordinated if incomplete Debussy series arrived in 10 new sets from Harmonia Mundi. The label's reliable genius to offer the most period- and style-sensitive recordings in exquisite packaging (including notes) yields the kinds of treasures only careful planning and the best recording can provide.

Rightly, the volume that has drawn the most attention is of "The Three Sonatas — Late Works." Most date from 1915, the year of the composer's cancer diagnosis, and a time during which, for reasons including the mounting horrors of WWI, he despaired of composing again. They sound like pieces that had to be composed.

For the entire series, Harmonia Mundi has brought out its A cast, which is to say solo musicians who are also consummate ensemble players, can hold their own with (and regularly outplay) any of their international colleagues, are masters of the styles of all the music they play, across all periods, and so technically secure you can listen easily, attending first to the music. Violinist Isabelle Faust, pianist Alexander Melnikov, cellist Jean-Guihen Queyras are among those tackling the late works. Elsewhere there are major contributions from Nikolai Lugansky (recently signed as an HM artist, who gets the "Claire de lune" and spectacular "L'Isle joyeuse") and conductors Pablo Heras-Casado ("La Mer," and heads up, guys, "The Martyrdom of St. Sebastian") and Francois-Xavier Roth and his period ensemble Les Siecles ("Jeux" and "Prelude a l-apres-midi d'un faune," perhaps the rival of "Claire de lune" as Debussy's best-known composition), with a companion concert DVD. It is genuinely illuminating to hear "La Mer" both in its fully orchestrated version (Philharmonia Orchestra) and in Debussy's own two-piano arrangement, with which Melnikov, playing an 1885 Erard piano, with Olga Paschenko, closes his mind-altering readings of the Second Book of Preludes, more revelatory with every hearing. Melnikov will disabuse you of any lingering notions that the sound palette of historical pianos is in any way restricted.

With the Philharmonia, Heras-Casado gives a more standard account of "Prelude to the Afternoon of Faun," surging in its open eroticism, whereas Roth's, with Les Siecles, paints with fewer hairs on his brush (and the bows of his strings) to create a more intimate, exposed, brisker atmosphere, more full of incident, never slighting a sense of ambient danger.

Debussy rarely composed in standard forms, but that it was a choice is borne out in the mastery of the quartet and late sonatas. The Jerusalem Quartet's ear-opening performance of his only string quartet (paired with Ravel's) is the most edgy, enthralling, propulsive, frequently wrenching yet magnetically involving account of the piece I've ever heard. The ensemble Quatuor Debussy revels in the composer's influence on jazz, and jazz on him, in bracingly original performances of 10 preludes in arrangements performed with jazz artists of note.

This being a death anniversary, the HM series comes as a welcome dispatching of the exhausted cliche of Debussy's music as gauzily impressionist and too easily evanescent. Instead we find a composer looking deep into the future for artists such as these, who secure his music the most promising future.