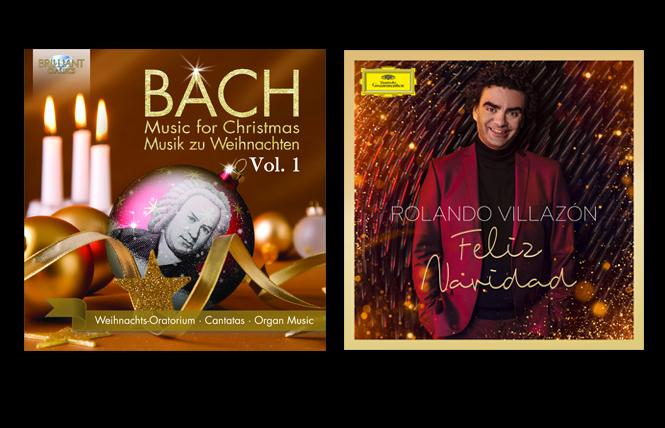 I've been doing these holiday music roundups for so long that I've lost track of what century we're in. Before it's too late, I invite you to take a read and a listen. Happy holidays!

Rolando Villazón: Feliz Navidad (Deutsche Grammophon) On our "Star Turn of 2018" recording, tenor Villazon, a Merola Opera Program alum, sounds as good as ever in his collection of mostly standard Christmas tunes. His accent on English-language selections that include Irving Berlin's "White Christmas" is charming, and his characteristic dark tone is balanced by some lovely soft touches. Villazón's Spanish in José Feliciano's "Feliz Navidad" and other selections is refreshingly idiomatic and sometimes thrillingly spirited, and what I believe to a high B in the French version of Adam's "O Holy Night" is sustained and solid. Lovely contributions from the Slovak National Symphony Orchestra and guest vocalists, with tracks recorded in multiple studios and spliced together with a bit of audible layering and digital ring.

Christmas on Sugarloaf Mountain: Apollo's Fire, Jeannette Sorrell (Apollo's Fire) Indefatigable Cleveland Baroque Orchestra Apollo's Fire, under Sorrell's leadership, brings fine voices and period-instrument artistry to traditional Appalachian melodies from the Sugarloaf Mountain region at the northern tip of Virginia's Shenandoah Valley. Because this is the region where both Sorrell and soprano Amanda Powell spent their formative years, these beautiful arrangements ring with truth and sincerity. With instruments that range from fiddle and hammered dulcimer to Medieval Vielle and Medieval bagpipe, the recording may play loose with Appalachian authenticity, but it is a delight nonetheless. Available as a high-resolution download in lovely sound, this recording's beauty will bring joy year-round.

The Mystery of Christmas: Ora Singers (Harmonia Mundi) Centuries-separated versions of "O magnum mysterium" by Byrd and Lauridsen are typical of this a cappella recording's fascinating mix of medieval and Renaissance melodies with contemporary choral melodies by Peacock, Williams, Weir, Macmillan, Rutter, Sametz and others. Nothing is standard or taken for granted. Highly recommended for both the refreshing repertoire and director-conductor Suzi Digby's impeccable blend of 20+ voices, capped by radiant sopranos with minimal vibrato.

Putamayo Presents Joy to the World (Putamayo) When a world music holiday album begins with Nossa Bossa Nova's Portuguese-language "The First Noel," and continues with Arspop's "Astrol del Ciel" ("Silent Night"), Frederick de Grandpre's French croon of "Noel avec Toi," Roman Street's pop fusion "Little Drummer Boy," Leon Redbone's "Christmas Island," and a Haitian-tinged "Frosty the Snowman," you know it's going to lighten any holiday celebration you may hold. A few of these tracks are a bit tacky, but the compilation as a whole is lots of fun.

Christmas Kiss: Diana Panton (2xHD Fusion) If you like a smooth-voiced jazz vocalist with a smiling tease in her little girl voice, and can handle a Christmas recording that begins with the line, "There's a very good reason why the holiday season/ Is the perfect time for a boy and girl to fall in love," this one could be for you. Available in various high resolutions including DSD64, it's certainly the best-recorded seasonal reissue you'll encounter this year. Anyone into a 21st-century version of lounge music — how about your brother with the built-in bar in his basement who lives with his wife and their 25 children in rural Montana? — will eat up this nicely done recording.

Bach: Music for Christmas (Musik zu Weihnachten) Vol. 1 (Brilliant Classics) The liner notes I've received with this compilation of presumably older recordings contain no information about the sources, but no matter. Lovers of classical music will rejoice that after encountering lots of pop fare, there's a reasonably priced Bach reissue available that includes Bach's entire Christmas Oratorio plus other pieces. These recordings will not replace the best recently minted period-instrument recordings with star soloists, but the voices are nonetheless fetching. And it's Bach, for goodness sake, which means it's some of the most beautiful and spiritually-rich holiday fare you'll encounter.

Folkjul II: A Swedish Folk Christmas (BIS) Here's another fine-sounding high-resolution recording with unusual fare, at least for North Americans. Gunnar Idenstam and the St. Jacobs Chamber Choir (St. Jacobs Kammarkör) have performed Folkjul concerts more or less each year since 2002.
Reflecting the sometimes uneasy merger of Swedish peasant folk culture and Christianity, the concerts mix old melodies with others newly composed. I love the juxtaposition of light folk instruments with the organ of Eric Ericsonhallen in Stockholm. Less comforting is speculation about what die-hard Christians did to peasants who refused to sign onto the program. But you won't hear any of that amongst these lovely selections.

Songs of Winter and Christmas: Papagena (Somm) Papagena is five women with truly sweet, quintessentially English light voices who mix traditional Irish, German, English, and Ukrainian melodies with everything from Joni Mitchell's "The River" to contemporary melodies. You'll never hear an a cappella arrangement of "In dulci jubilo" like Matthew Culloton's recorded here. Extremely nice and soothing, especially in hi-rez.