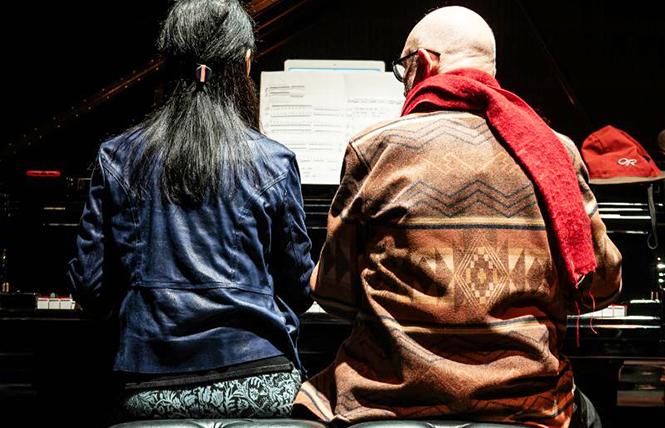 Musical iconoclast, mind-blowing performer and minimalist pioneer Terry Riley has always been hard to classify. In a brand-crazy world, one genre can't describe his many influences. The music comes from East and West, and ranges from raga to ragtime. He has synthesized a unique blend of classical, pop, folk and modern jazz.

No labels were needed for Riley's recital with longtime collaborator and Grammy Award-winning pianist Gloria Cheng at the recent opening night of Other Minds' 2018-19 25th anniversary season at Yerba Buena Center for the Arts Forum. The concert showcased Riley's piano works, with the composer himself performing a selection of his semi-improvised solo piano jams, including some delightful tribute pieces. His brilliant prowess at the keyboard and endearing personality demonstrated the one label that describes him best: "Living Legend."

Pianist Gloria Cheng appeared solo on the first half, and later played harmoniously alongside her groovy old musical guru. Cheng's precise renditions of the absorbing "The Heaven Ladder, Book 7," "The Walrus in Memoriam" and the early "Two Pieces for Piano" (think Schoenberg unbound) showed her meticulous technique and heartfelt understanding of Riley's brilliant and quixotic mind.

Both Riley and Cheng finished the evening with the Bay Area Premiere of "Cheng Tiger Growl Roar" (2018), a new four-hand work composed using a jumble of their initials for inspiration.

Young music students were given free tickets to the concert by Other Minds in a smart and friendly gesture to bring fresh faces to the organization's ongoing history of innovation. If they weren't already aware of Riley's famous, ground-breaking work "In C," which many credit as the birth of the Minimalist movement, or their parents' well-worn copy of "A Rainbow in Curved Air," they quickly learned why he is still relevant, not to mention entertaining.

Other Minds Executive & Artistic Director Charles Amirkhanian was on hand to introduce the performers and make his own congenial commentary. He also previewed some of the exciting highlights of this year's season, thematically exemplified by visionary composers (and their "otherness"). Riley was on the first Other Minds Board of Directors in 1993. Having him back to kick off the season with the talented Gloria Cheng seemed not only fitting, but also lots of fun.