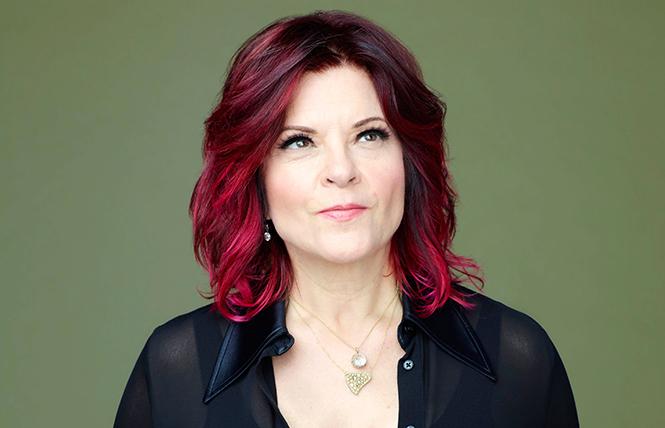 Singer-songwriter Rosanne Cash and guitarist Ry Cooder will perform their rendition of the music of Johnny Cash on Dec. 5-6 at the War Memorial Opera House.

Cash, who just released her 15th album, "She Remembers Everything," on Blue Note Records, and Cooder, best known for his work with the Rolling Stones and Van Morrison and for producing the album "The Buena Vista Social Club," will reprise their four-night sold-out 2017 collaboration at SFJAZZ, where they first performed Johnny Cash classics.

"I had been avoiding singing my father's music for 40 years," said Cash in a telephone interview with the B.A.R. But the four concerts, which sold out almost immediately, "turned out to be a wonderful way to put my memories to rest," she said.

So when SFJAZZ invited her back this year, Cash decided to take a short break from her worldwide tour promoting her 15th album for two nights in San Francisco. She will also be performing her new music on Jan. 27, 2019 at Napa's Uptown Theatre, and on Jan. 30 at Monterey's Golden State Theatre.

Cash, the winner of four Grammys and nominee for 11 others, has also written four books, including the bestselling memoir "Composed," and has written essays published in The New York Times, Rolling Stone, and The Nation. In addition to continual worldwide touring, Cash has performed at Carnegie Hall and Lincoln Center.

Born in Nashville in 1955 just as her father's songs were hitting the charts, Cash spent her early years growing up in California. She said she always wanted to be a writer, but not a musician. But as a teenager, her father encouraged her to go on the road with him to learn the music business. She learned to play the guitar and often came out from backstage to sing in the finale. She moved to London for a while, hoping to write songs for other people. "Life on the road in the music business was not appealing to me," she said, noting that many performers, including her father, had longstanding problems with drugs.

But once Cash got her first recording contract, at age 22, she changed her mind. Back in Nashville, Cash won commercial and critical success following the release of her second album, "Seven Year Ache," which yielded three #1 country hits. But being the daughter of Johnny Cash wasn't always easy, she said. "People were sometimes resentful," she said, "thinking you have it easy." Cash said her sound was different from her father's, "more California new country than Tennessee rockabilly."

After nine years in Nashville, she left for New York City with her three children after her first marriage fell apart. She married producer John Leventhal in 1995, collaborating with him on her latest album, "The River and the Thread," which won three Grammy awards. When she is not writing, rehearsing, or touring, Cash said she has "a really busy life" with her family.

"Today my daughter and I spent half a day going through my files and getting rid of a lot of old clippings," she said. With her latest album released just two weeks ago, Cash said she is spending a lot of time promoting it on radio and TV. "And doing interviews just like I am with you right now," she added.

She is finishing the last song for the score she has written for a theatrical production of the 1979 movie "Norma Rae," the story of a factory worker in North Carolina who gets involved with labor union activities. The musical, which is going into rehearsals soon, will be staged next summer.

Cash's activism also keeps her busy, she said. Among the issues she has been fighting for are artists' rights, both to control how their work is used and to be paid fairly. She testified before Congress on intellectual property rights, copyright reform, and the "weird loopholes in the law that allow digital companies to avoid paying legacy artists. These practices are "horrible and disrespectful," she said.

Another issue, gun control, has been on Cash's radar for two decades. "A single child's life is more precious than the right to own a personal arsenal of military-style weapons," she said. "The killing of children in schools should not be collateral damage for the Second Amendment." Cash has organized a number of seminars on gun control legislation.

Cash has also been a longtime supporter of women's rights. "We are not small, inferior versions of men," she said. "We deserve respect and every kind of consideration given to men, including equal representation in government and equal pay."

While not "overtly political," Cash said the songs on her new album, all written or co-written by her, reflect the world "from a uniquely feminine perspective. I wish I could be more optimistic about the progress of women's rights. Given the current political situation, and the recent appointment of [Supreme Court Justice Brett] Kavanaugh, it's obvious that much of what I have hoped would change in my lifetime really has not. At least not yet."