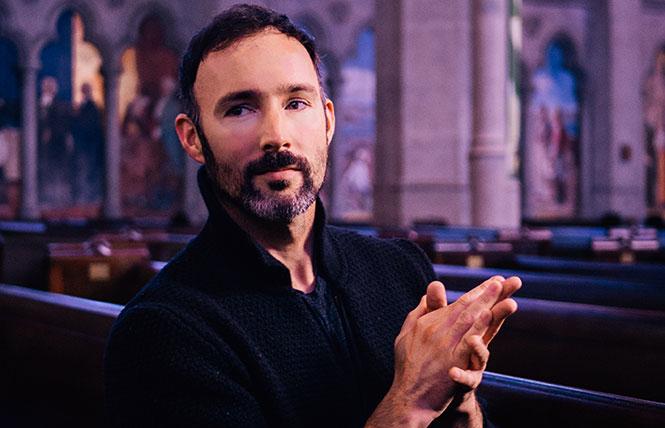 "Requiem Mass: A Queer Divine Rite" will have its San Francisco premiere on Nov. 16 & 17 at Grace Cathedral. The piece is an evening-length choral work by singer-composer Holcombe Waller, created to honor those who have suffered persecution due to their sexual orientation or gender expression. "Requiem Mass" is presented by Yerba Buena Center for the Arts in collaboration with Grace Cathedral's Ghiberti Foundation.

"'Requiem Mass: A Queer Divine Rite' is a radical appropriation of a European, patriarchal tradition, the formal Latin Mass, which we reinterpret through the lens of the marginalized LGBTQ experience," Holcombe Waller told the Bay Area Reporter. "In many ways, the result is like an alternate universe in which the millennia of queer leadership in communities of faith have been out all along, shining their example of loving equity across all people. This is what the piece seeks to dream into being."

Waller said that it was the Mormon and Catholic Churches' support for Proposition 8, the California ballot measure of a decade ago that sought to define marriage as between one man and one woman, that inspired him to create the work.

"At that time, I realized that the queer arts owed it to organized religion to intervene," he said. "It's so misguided to apply Christian tenants against equitable social justice. It's sort of a no-brainer to offer some ceremonial counterpoint. Music brings people together. It creates fellowship and shared experience. It disarms, it softens, it connects with heart. A Requiem calls on our common mortality. These were all points of inspiration." 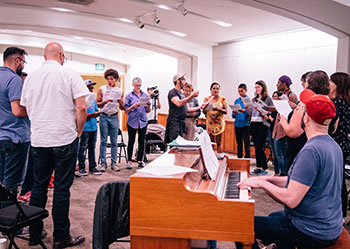 Waller noted that he wasn't terribly concerned with how Catholic Church leaders might feel about the Requiem Mass. He feels the Church has its hands full with its history of supporting and covering up sex crimes against children. "I can't really imagine how they might feel about this work, but I can say that the Catholic Church should immediately and irrevocably end all discrimination against LGBTQ people," he said. "End the bans of intimacy, end the judgment, end the discrimination. There is no theological basis for it, the quoted 'clobber passages' are never in the spirit of the original texts anyway. Everyone knows it."

The Requiem Mass is, first and foremost, a prayer for the peaceful repose of the dead who suffered persecution for their sexual orientation or gender expression.

"The AIDS crisis was a particular reckoning with how oppression and judgment, often amplified by non-LGBTQ-affirming religious institutions, can literally wrest compassion and understanding from the grasp of humanity," Waller said. "I believe in my heart that people are innately loving."

He pointed to the lyrics of "Carefully Taught," a song from the classic musical "South Pacific." "You've got to be carefully taught to hate, you've got to be taught before it's too late, before you are six or seven or eight." 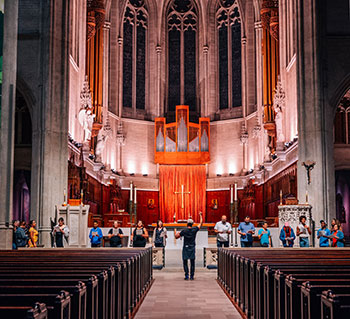 "AIDS would have been a crisis with or without the mainstream culture's marginalization of gay men at that time," he said. "But layering cultural judgment and oppression on top of the crisis did everything from cast blame to slow tactical response for years and years. So of course the work invokes the peaceful repose of those we lost in the AIDS crisis, but it also specifically addresses the general and quite ancient arc of LGBTQ oppression and persecution that flowed through the AIDS crisis. In this way, the Requiem's prayer for the peaceful rest of those who suffered persecution is also a cry for an end to the cultural construct of LGBTQ persecution."

The piece conveys the true, loving and inclusive messages of the Christian texts, Waller said. "For many who grew up in religious contexts who felt alienated for their gender expression or sexuality, the piece may feel cathartic and surprisingly uncanny in how it intersects the familiarity of High Church with the incredibly queer-affirming love, despite the fact that it's right there in all of the most basic Christian ideals."

The Mass will be performed with an all-abilities choir, he added. "Because the Requiem prays for those persecuted for their marginalized gender or sexual identity, the supporting panel of advisers to the project here in the Bay Area felt that we must measure our success by the total accessibility of the community engagement process. Otherwise we would be turning our backs on those who are most marginalized even within our contemporary LGBTQ space. That would be out of line with the project's mission."

The choir, Waller pointed out, is the heart and soul of Requiem Mass. "They are the embodiment of loving, spirit-driven queer identity that the Requiem dreams into being. And they can be atheists, Christians, or any strand of religion," he said. "I myself am not religious. The music brings the focus together."

Waller acknowledged that even today many LGBTQ people continue to face persecution. "Despite all of the strides we've made, it is still a challenge to be LGBTQ today, even in the Bay Area, for many people, particularly queer people of color and trans people," he said. "The lack of equity is so real. The barriers span cultural, socio-economic and geographic space. It takes real work to overcome these barriers. Speaking as a cis white male, we who don't face these challenges can forget this. We can coast on privilege without doing the work to continue the march toward a more fully equitable society."