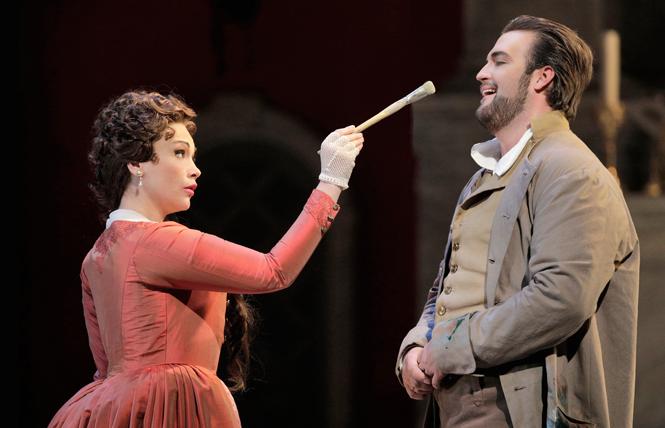 Once famously derided as "that shabby little shocker" and condemned as "little more than a manipulative melodrama," composer Giacomo Puccini's "Tosca" ultimately triumphed over the naysayers. His superbly melodic and impassioned verismo tragedy has become one of the world's most frequently performed operas. It is certainly one of the most frequently performed by the San Francisco Opera. The fabulous diva has graced the stage of the War Memorial Opera House in over 30 productions since the legendary first opening night of the Beaux-Arts auditorium in 1932.

To name just a few on the starry list at SFO who have (spoiler alert) jumped from the parapet of Castel Sant'Angelo in Act III: Renata Tebaldi, Leontyne Price, and the glorious Montserrat Caballe, who sadly died just last Saturday, immediately come to mind.

I mention the women, because, important as the male leads are, the raison d'etre for any new production must be a proper showcase for a soprano capable of personifying the glamorous essence of an opera star.

After an absence of only four years, fiery and tender, temperamental Floria Tosca has returned in a handsome new production that introduces Italian soprano Carmen Giannattasio to SFO in both her Company and role debuts.

The fine sets by production designer Robert Innes Hopkins are remarkable for their attention to detail. Warmly bathed in Michael James Clark's effective lighting design, they look sturdy enough to last for years, and the gorgeous costumes pop in the elegant surroundings.

Add a good tenor as Tosca's lover Cavaradossi and a menacing baritone as nemesis Baron Scarpia, and you have the right framework. Less favorable to the support structure, director Shawna Lucey's slightly fussy direction is distracting at times, and conductor Leo Hussain (SFO debut) treats Puccini's orchestral flow as if it were written by Wagner.

The director makes up for the unnecessary bits with some otherwise telling details: Scarpia wipes his own brow before offering the handkerchief to a suffering Tosca, and the torture of Cavaradossi is staged in frightening silhouette against an opaque window.

Hussain caresses the score with enough loving care that one can't help noticing the composer's imaginative orchestrations and the orchestra's marvelous response. We wish he would pick up the pace, but the score has rarely sounded so textured. 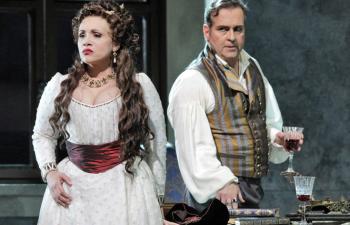 Hendricks has a good voice, and he always hits his mark, but there would be no harm in laying on the prosciutto a little thicker when portraying one of opera's meanest villains. There is a moment in Act II when Hendricks breathes over Tosca's shoulder with a sneering malevolence and lust that are genuinely creepy. He might consider amplifying that chilling quality throughout the rest of the run.

American tenor Brian Jagde (New York, New York) has portrayed the heroic political activist-artist Cavaradossi in the last two SFO productions of "Tosca" to notable success. That may be the reason why Management has selected him as the obvious go-to guy for the role. He looks great on the big stage, with his dashing good looks and believable acting skills. He also has the clarion vocal quality needed to fill the big auditorium. More cynically, as a rising, albeit fast-rising star, he was probably chosen to avoid making a new "Tosca" all about him.

The current production is meant to spotlight the title character above all else, and thankfully, Carmen Giannattasio's highly anticipated debut fulfills all expectations. The charming ambassador for the international opera circuit couldn't be better suited to the role.

Jagde sings a little too loudly at times, and, while it never sounds effortful or harsh, he doesn't need to compete with Giannattasio's subtler squillo (resonant technique). She is wonderfully audible and lyrical throughout, and maintains character — singing softly, in a duet, or riding over a swelling orchestra.

Her portrayal shifts from coquette to jealous lover or vengeful tigress on a lira, and she really looks the part. We shouldn't dwell on physical attributes, but in "Tosca" they only add to the realism. Besides, the abused heroine gets her ultimate #MeToo moment in Act II, when #Time'sUp for Baron Scarpia.

Many recommend "Tosca" as a great first opera, and I won't argue against it. Seasoned fans may have held their breath when the old warhorse was announced for the SFO's new season, but they can exhale now. The "shabby little shocker" is vivid as ever in brand-new, not-so-shabby-chic finery. With a diva who really fills the bill, "Tosca" is welcome back in town.

Continues in repertory through Oct. 30. www.sfopera.com.