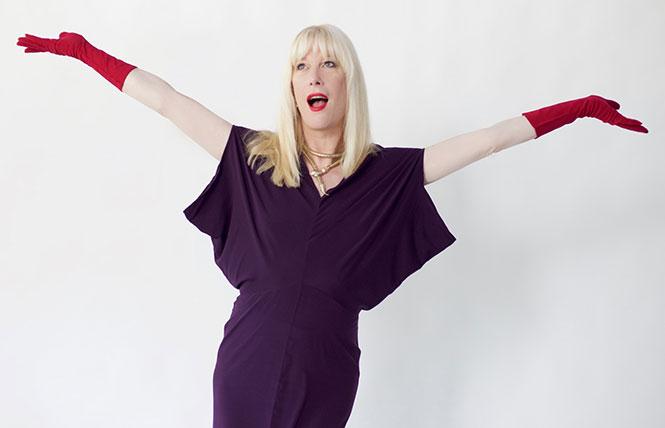 Justin Vivian Bond: "My job is to entertain the choir." Photo: David Kimelman

Called "the best cabaret artist of his generation" by The New Yorker, Justin Vivian Bond returns to San Francisco to perform at the GLBT Historical Society's annual gala on Friday evening, Oct. 5.

Mx. Bond, a Tony nominee and Obie-winning trans-genre performer, will be singing a handful of San Francisco-themed songs at the Green Room of the War Memorial & Performing Arts Center, 401 Van Ness Ave. Tickets are $150.

To hear more about their upcoming appearance here, the B.A.R. caught up with Bond in a recent telephone interview from their [Bond's preferred pronoun] East Village apartment in New York City.

Bond, who first achieved prominence in the stage duo known as Kiki and Herb, says their successful career was inspired by their years in San Francisco. In 1988, three years after graduating as a theatre major from Adelphi U. in Long Island, NY, Bond moved to San Francisco, where they worked at A Different Light Bookstore, joined ACT UP and Queer Nation, and "became an activist and performer."

"My political and creative growth" began in San Francisco, Bond said. "I was only there for six years, but the years between 25 and 31 were very big ones for me, as far as who I was and who I was to become."

Getting involved in the punk scene in San Francisco, "It was the first time I saw a place for myself with the activists and artists who created a world that hadn't existed before. And it was the time when I became a true artist — not an artist as I was taught in school, but one with my own voice." 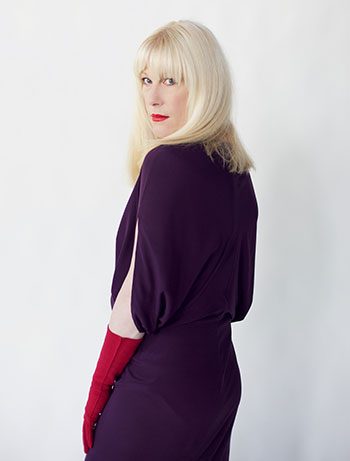 A "turning point" came when [gender-non-conforming activist] Kate Bornstein cast Bond in a play, "Hidden: A Gender," the first time they performed a female role. Soon afterward, Bond created the lounge act "Dixie McCall's Patterns for Living" around the persona of actress Julie London. Bond says their "breakthrough" role came under the pseudonym "Kiki Durane" in the stage duo known as Kiki and Herb, with co-star Kenny Melman.

At age 31, Bond moved to New York City. "I felt I had a choice. I could continue my life in San Francisco, which I was happy with at the moment, but I realized I wouldn't be content unless I could see how far I could take my work into the mainstream.

"It was the right decision," Bond said, pointing out that they were the headliner at Carnegie Hall twice, and they brought a "queer voice off and on Broadway." Bond "toured the world" with the show "JVB is Close to You," an homage to Karen Carpenter. Countless roles on TV and film followed. Bond has been honored with an Obie, a Bessie, and a Tony nomination.

While Bond's cabaret shows don't include any political material, politics continues to affect their performance. "Many of us are so engaged in the 24-hour news coverage that I feel it's more important than ever to make my shows more personal, genuine, and authentic. It's my responsibility to be entertaining, which is something I believe we all need, now more than ever. It's not necessary to give people a political message. I'm quite sure that almost everyone at my shows already has an affinity with my worldview. I don't have to preach to the choir. My job is to entertain the choir."

As to their goals for the future, Bond said, "I'd love to do one really good memorable part in a movie, and I'm looking forward to releasing a new record next year. But other than that, I love what I'm doing, so I hope to continue my cabaret performances."

While it's sometimes difficult to find venues, especially in Los Angeles, Bond says he loves coming to San Francisco, "where Heklina and D'Arcy [Drollinger] have created the Oasis, a haven where I can perform at a place owned by friends and family. It's so much better than playing at a club owned by some creepy corporation that exists just to make money."

The October gig at the GLBT gala "is a tremendous honor," said Bond. "When I lived in San Francisco during the AIDS epidemic, it was apparent that so much of our history was lost" as the epidemic took its toll. Now, looking back, "I really appreciate all the important work the Historical Society does to document our movement. I am thrilled to be a part of an event benefitting this impressive organization."

Tickets to see Justin Vivian Bond at the GLBT Historical Society Gala on Oct. 5 are $150 and up, available at www.glbthistory.org/gala