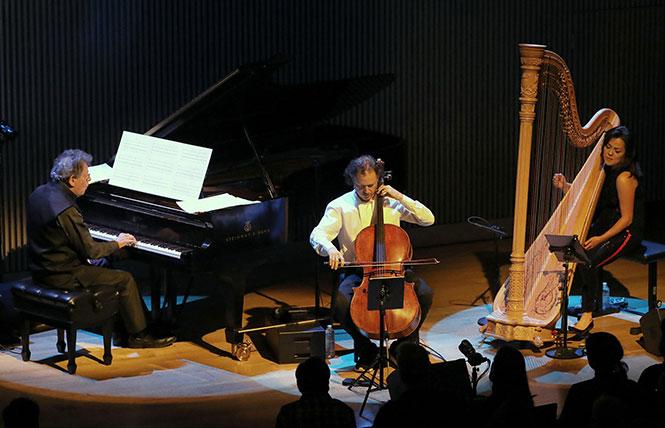 At 81, Philip Glass may never escape the label of minimalist composer. His prolific career has grown since the 1970s to produce an awesome wealth of music. Despite writing everything from ballets to operas, theatre music, films, and symphonies, his legacy will still most likely be best known for his hugely influential early style.

Performing on piano with harpist Lavinia Meijer and cellist Matt Haimovitz in recent chamber concerts at SFJAZZ Center, Glass managed to exemplify another title that is undisputable. He has always been a working musician. Evenings devoted to some of his works for piano were also part of the "Philip Glass Fest." He played alongside Anton Batagov, Aaron Diehl and Jenny Lin to further demonstrate his own performing skills.

On opening night, Glass unobtrusively made a solo entrance, without introduction, to the stage of the Miner Auditorium. The ageless icon briefly acknowledged the welcoming ovation before turning to the piano and the real business at hand, his first set.

One of the most revelatory aspects of the concert that followed was the recognition of some of the composers who have influenced him. The sheer volume of Glass' compositional output has inevitably included some misses and mediocre re-statements, but his inborn technique has always been the brilliant trademark of his own highly recognizable style.

Pleasing his admirers but maddening some critics, Glass has remained amazingly consistent. Hearing the subtle influence of others, as it emerged in the barer scoring of the program's chamber transcriptions, showed the great influencer was also listening to others as he wrote his own masterpieces.

Where does music come from, after all? Glass has been pondering the question for most of his life, but has admitted it will probably remain a mystery. He has sensibly moved on, maintaining a strong commitment to himself while listening closely to the world outside.

Other composers are rarely programmed in a Philip Glass concert, but the rules were softened to allow talented cellist Matt Haimovitz a go at some Bach (J.S.) in his solo sets. It offered a juxtaposition that vividly underscored the relationship between a composer's technique and style.

Harpist Lavinia Meijer also demonstrated poise and accuracy in her solo moments. "The Hours" from the film of the same name was arranged by her. The clear, gleaming tone of her playing brought fresh insight to a beautiful piece.

Joining with the composer for trio readings of music from "The Tissues" (a set of pieces derived from the film "Naqoyqatsi"), Etude No. 10, and "The Orchard" (originally written for piano and violin), the young musical colleagues showed an easy musical alignment with the old pro.

The most deeply satisfying and perhaps the most characteristic selection came from the opening of the concert itself and Glass' own solo performance of "Mad Rush," adapted from an earlier organ piece. Funny, in a way, but endearing, the composer has never played his own music with the kind of fierce pinpoint perfection of other pianists. He does have miraculous energy, though, and it served him well as the cell-like phrases inexorably emerged. The sound of his touch added warm personality.

"Mad Rush" was written for the Dalai Lama on his 1979 visit to St. John the Divine Cathedral in New York. As an example of the stunning impression the composer made early in his career, he couldn't have made a better choice as an opener for the Philip Glass Fest last week. The working-musician composer is still making audiences sit up and pay close attention, one gig at a time.