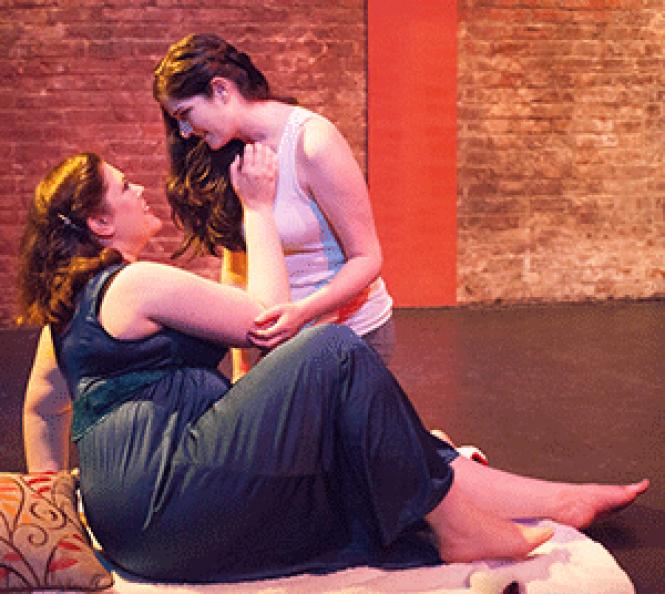 Opera Theater Unlimited made good on its name last week with the world premiere of an original opera at Exit Theatre in San Francisco's Tenderloin. The plucky company presented the powerful music drama "Hunter," with a libretto by San Francisco-based Caitlin Mullan and music by Joseph M. Colombo, as its third production since starting in 2015. Ambitiously exploring a complicated variety of political and psychological themes, the earnestly impassioned work may occasionally stretch credibility, but still rivets attention over three acts, owing to the clear stage direction of OTU founder Sarah Young and equally committed portrayals by a talented cast of six.

There are also six excellent musicians in the orchestra, seated against a brick wall to the side of the intimate venue. Conductor Elliott James Encarnacion shaped an effective performance that added emotional punch to an already highly-charged score.

There are problems with the dramaturgy of Mullan's script, but none big enough to stop the cumulative impact. Minor editing might focus the title character's journey and avoid repetitive exposition. Hunter is a young female soldier in "a world not unlike our own," but she could just as easily be facing oppression for her gender and lesbian orientation in any small American army town. A dream sequence, which opens the opera, contains a grim prophecy from "the oracles," prompting her to make some unwise decisions before the drama resolves. The oracles are never satisfactorily explained, but Hunter is a bright and sympathetic woman, so we can easily chalk them up to her subconscious, part of the challenging path to awakening.

She is secretly in love with Addison, the girlfriend of fellow soldier Max. Her mysterious behavior does not go unnoticed by Iago-like colleague Olivia. Max turns out to be a stand-up guy, eventually accepting as his almost-affianced town rich-girl guiltily returns Hunter's love.

Hunter's mom is down with it, too, and so is Addison's sister Vanessa. It is the jealous Olivia who bitterly resents their privileges. She's determined to rise in the ranks of the military and society herself, using any means possible. Her meddling builds to fever pitch in the last act, triggering an ugly reaction by the "public" (why not just violent townies?). It serves as a useful plot device, forcing Hunter's decisive epiphany.

That's all I can say without spoiling the outcome of a really good yarn. Let's just say there are good and bad choices to be made when struggling with the truth. Caitlin Mullin has a lot to convey. When she keeps it down to earth, it has universal resonance.

Colombo's propulsive score is functional in dialogue and lyrically appealing in some of the arias, most notably when characters grapple with coming-out issues or voicing their feelings of love.

Olivia gets a good and necessary solo to explain her reasons for being such a bewildering joy-killer. Soprano Yemonja Stanley, graduate with honors from the San Francisco Conservatory of Music, defines her character's anger with subtlety and an astonishing vocal range.

As the mother Bronwyn, mezzo-soprano Corinne Elizabeth Rydman relies on her considerable acting skills and rich-toned voice to create a sweet portrayal of Hunter's spiritual mentor.

Briefly appearing as the stern Commanding Officer, and more significantly as Addison's pragmatic sister Vanessa, soprano Maggie Manire (Master of Music degree from SFCM) adds another role to her growing repertoire, making her third appearance with OTU. Her bright and pure voice handled the demands of Colombo's tessitura with calming warmth.

Ease with the wide range of vocal writing also kept the characters embroiled in the love triangle from tiring listeners' ears. Tenor Jonathan Smucker has an impressive resume, with numerous appearances throughout the Bay Area. His cuckolded Max was finely sung, etched with dignity and a real sense of moral decency.

Soprano Jill Morgan Brenner (Master of Music degree, SFCM) made a moving case for Addison's conflicted emotional state. Her previous performance with OTU as Ottavia in "L'incoronazione di Poppea" was enthusiastically received, and her beautiful tone is well-supported by distinguished acting.

In the title role, soprano Katie Nix had her work cut out for her. Bearing the weight of the story on her shoulders, she embodied her part with a touching combination of strength and vulnerability. As an OTU veteran she has already proven her vocal agility. In "Hunter," Nix sings with star-quality self-confidence. Her confrontation with Max in Act II was simply breathtaking â€" for us, but not for her.