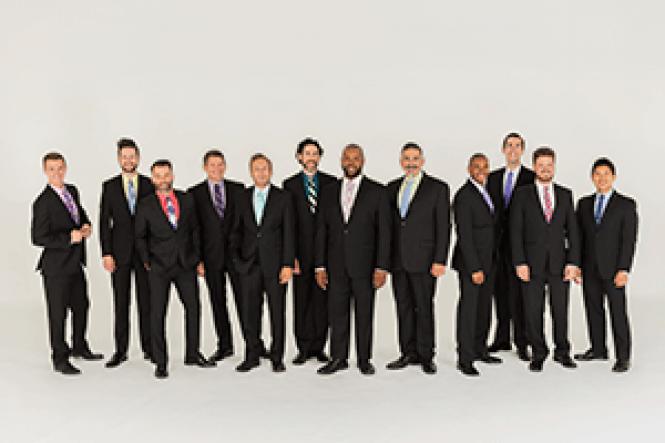 With the continual barrage of bad news coming out of Washington, we need some uplift, solace, and hopefulness. So we're fortunate that the San Francisco-based, Grammy-winning male ensemble chorus Chanticleer is providing a mostly exhilarating spring tonic in its new concert "Psalm," featuring music of "transcendent prayers of thanksgiving and consolation, psalms of happiness and paeans of praise." While half of the program centered on Chanticleer's piece de resistance, Renaissance polyphony, the second part spotlighted contemporary religious songs, with the highlight the world premiere of Pulitzer Prize-winner (for 1987's "The Flight Into Egypt") John Harbison's first composition for Chanticleer, a choral interpretation of Psalm 116. Fittingly, this all-sacred music program was performed at St. Mark's Lutheran Church, with its neo-medieval blend of Romanesque and Gothic architectural elements.

The concert opened with 16th-century composer Orlando di Lasso's elaborate motet setting of "Jubilate Deo," the joyful Psalm 100, gloriously sung to melodic perfection. It was followed by early-15th-century Jean Mouton's "Missa Alleluya," a mass setting of the Sanctus that was simultaneously austere and harmonious. The lush "Tu es Petrus," a gorgeous rendition of St. Peter's commissioning by Jesus to build his church, written by Tomas Luis de Victoria, Spain's most famous Renaissance composer, was a triumph. An Anglican chant setting of Psalm 84, "How lovely are thy dwellings," by the early-20th-century English organist-composer Percy Carter Buck, oscillates strength with serenity. But it was placed in-between the Renaissance masterpieces, interrupting their sublime exuberance with its stately monophonic reverence. The piece might have been more effective set separately, later in the program.

Returning to Spanish church polyphony with the 16th-century Cristobal de Morales' "Vidi aquam," an Eastertide motet in an alternating chant style, had an emotional wallop to it. We then shifted to Renaissance England with Tudor composer Thomas Weelkes' haunting spiritual madrigal "When David Heard," portraying King David's intense mourning over the loss of his son Absalom. The sense of grief that echoed in the voices was penetrating. The next rendition was late-16th-century Thomas Morley's passionate motet "Laboravi in gemitu meo," a musical impression of the rivers of tears described in Psalm 6. It seemed fitting for progressives in the age of Trump. The great 16th-century Italian master Palestrina provided the well-known motet "Sicut cervus," based on Psalm 42, showing Chanticleer's mastery of contrapuntal technique.

Then there was a seemingly radical shift to 20th-century American gay composer Virgil Thomson's elegant, sincere arrangement of Psalm 23 in the traditional American folk hymn "My Shepherd Will Supply My Need." Along with the "Jubilate Deo," this consummate recital was the zenith of the evening.

But what should have been the peak of the concert, Harbison's "Psalm 116," was in fact its nadir. Its discordant melody was off-putting considering the gorgeous harmonies that preceded and concluded it. At almost 15 minutes, it became an exercise in perseverance. Not that it was not magnificently sung in all its intricate counterpoint cacophony. No doubt it was a thrilling vocal challenge for Chanticleer, but it was also a challenge for the audience to endure. We can call it the Trump moment of the evening.

One is hesitant to single out individual voices in such a seamless blend of tonal luxuriance, but baritone Matthew Knickman in "Hark," bass-baritone Marques Jerrell Ruff in "Steal Away," and countertenor Adam Ward in "My Shepherd" were all outstanding solos, reflecting the brilliant leadership of music director William Fred Scott. All in all, a thrilling hour-and-a-half with only one blunder. So replenish your soul with an evening of healing and restoration during these trying times.Â