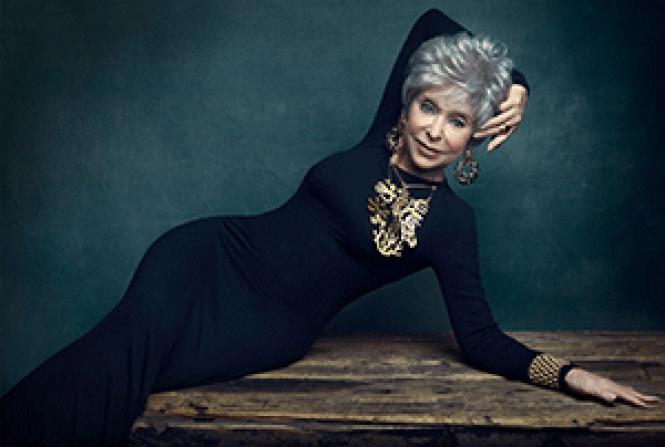 Few performers can match the longevity of Rita Moreno. Now 85 years old (she announces her age proudly), Moreno first attracted attention with her role as Zelda, a silent-film starlet in the classic musical Singin' in the Rain (1952). A decade later she won an Oscar for her portrayal of Anita in another classic musical, West Side Story. Moreno's award was a pivotal moment in Oscar history. She was a Latina actress playing a Latina role at a time when people of color were largely invisible in the movies. Moreno was the first Latina to take home the coveted statue for acting.

"I was beside myself," Moreno tells the B.A.R. "I thought Judy Garland would win for Judgment at Nuremberg. When my name was called I could not believe it! My mom was there, it was so wonderful."

Yet Moreno spent the next seven years doing TV and theatre. "I was offered a lot of parts that were lesser versions of Anita in West Side Story," she recalls. "Show business, gotta love it!"

But Moreno persevered. Eventually good film roles came her way again. She went on to become the first performer to win all five major performing awards: an Oscar, a Tony, a Golden Globe, an Emmy and a Grammy. She was awarded a National Medal of Arts from President Barack Obama, plus Lifetime Achievement Awards from the Screen Actors Guild and Kennedy Center Honors, among many other awards.

Moreno, who will be performing at Feinstein's at the Nikko on April 21 & 22, won her Tony Award for The Ritz, a screamingly funny Broadway farce set in a gay bathhouse. Moreno played Googie Gomez, a no-talent but lovable girl from the barrio who performed for the scantily clad bathhouse patrons. She reprised that role for the 1976 movie version of The Ritz. She retains a strong gay following and is a staunch community ally.

"My gay following started with The Ritz ," she said. "I've always had gay friends. My best friend as a teen was Eddie, a gay Cuban kid. We would laugh and laugh. I'd love to see him now."

One person from her past with whom she remains in contact is West Side Story co-star George Chakiris, who also won an Oscar for the film. "George is my daughter's godfather," she said. "He's a dear friend."

Moreno is also quite fond of actress Fran Drescher, who played her onscreen daughter in the TV Land series Happily Divorced. The sitcom was about a woman (Drescher) whose best friend is her gay ex-husband. The series was produced by Drescher and her real-life gay ex-husband Peter Marc Jacobson.

"I loved working with Fran," Moreno said. "She's good people. She and Peter were always hugging each other. The show was hilariously funny and had delicious writers."

Moreno was surprised when Happily Divorced was cancelled after two seasons. "I have a feeling it was marketed improperly," she said. "Maybe the show wasn't right for TV Land. We had a great cast. Fran tried very hard to sell it to another network."

Currently Moreno is appearing on the Netflix reboot of the 1970s sitcom One Day at a Time.

"I'm so happy to be there," she said. "I'm 85, and I have this sensational series. We've been picked up for a second season." She expressed her affection for 94-year-old Norman Lear, who produced the original series and is again producing. Moreno reports that he's on set everyday and is still at the top of his game.

Moreno has no plans of slowing down. She continues to appear in films and on TV, and to perform her cabaret act around the country. To look at her today, one might think that she's in her 60s.

"I'm very flattered," she said. "I've always had good genes. For years my career suffered because I couldn't play my age."

Moreno declined to give too much information about her upcoming show at Feinstein's. She wants to surprise people. "I'll do Broadway stuff," she said. "They'll be funny pieces because I love to be funny. I'll do songs that I like. I have to like the songs that I do."

She'll also be telling stories about her wonderful life. She mentioned her former boyfriend, the great actor Marlon Brando, as someone she might share stories about.

"You could call the show scrambled eggs," Moreno said with a laugh.