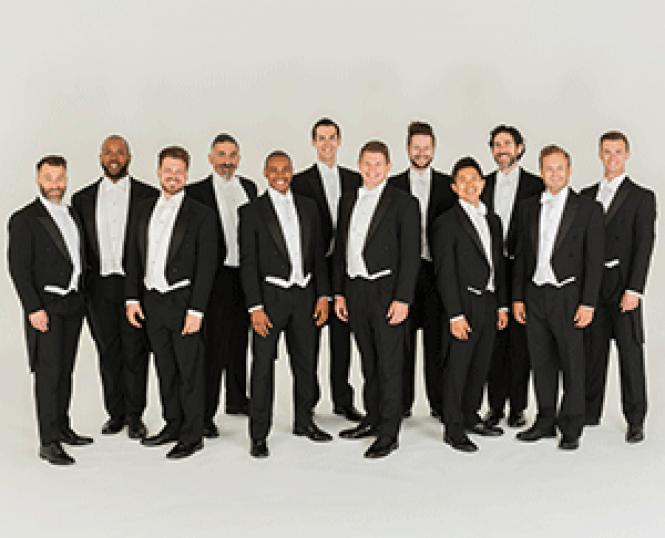 This is the second time both groups have combined to present a themed concert. The first collaboration, Atlantic Crossing in 2014, revealed the influence of Europe on American popular music in the 20th century. Americans in Paris, heard at First Presbyterian Church, Berkeley, reversed the voyage, and plunked the talented adventurers back across the pond, smack-dab on the Champs-Elysees.

It proved a clever idea, and a fine chance for the conductor-less string orchestra and the "orchestra of voices" to show the range of their abilities with everything from classical and cabaret to the blue notes of Gershwin and the sensuous sophistication of Cole Porter.

Not everything worked. There was a little too much New Age treacle in the arrangement of Faure's Pavane for orchestra and optional chorus, but that could be blamed on the truly awful poetry of Robert de Montesquiou and the ubiquitous familiarity of the beautiful melody.

The Coda and Apotheosis from Stravinsky's Apollon musagete (the composer spent years in Paris, though his ballet was commissioned for Washington, D.C.) sounded ill-tuned and poorly paced.

Both works were on the first half of the program, and if I was engaging in some critical nit-picking, the enthusiastic audience responded with wholehearted approval. I warmed more to Chanticleer's lovely simplicity in songs by Maurice Ravel and Saint-Saens' Serenade d'hiver .

After spending intermission outdoors in the unseasonably balmy Berkeley night, filled with the fragrant scent of jasmine, we were all relaxed and ready for part two. It turned out to be slap-ya-maman good.

Violinist and New Century Chamber Orchestra Music Director Nadja Salerno-Sonnenberg will step down from her role at the end of this season. Photo: Courtesy NCCO

Starting with cabaret songs arranged by Evan Price, sung in the style of French and American vocalists Blossom Dearie, Yvonne Printemps, Piaf and Josephine Baker, the gentlemen tore into their set with wit and beguiling charm. Some new male sopranos (countertenors) in the group scored especially well, managing somehow to swing without resorting to falsetto or excessive vibrato.

Chanticleer, like the NCCO, is constantly evolving, and seeing these bright-eyed and bushy-tailed fresh youngÂ recruitsÂ amongst the ranks added zip to the entertainment.

Violinist and Music Director Nadja Salerno-Sonnenberg previously announced, after close to a decade, that she will step down from her role following NCCO's 25th anniversary season in 2016-17. HerÂ endearing and enduring worth featured prominently in the concert's centerpiece selection, Gershwin's Suite from An American in Paris, arranged beautifully by Clarice Assad. It was passionate and jaunty and tears-to-the-eyes wonderful. The musicians were in complete harmony with Salerno-Sonnenberg's soaring solos, and by the time the big melody rolled around,Â everyone was totally mesmerized. Standing ovations are usually overdone and insincere; this performance deserved the extended applause and cheers.

The happy interaction between both ensembles was obvious throughout the entire show, and the concluding medley of songs by George and Ira Gershwin and Cole Porter had them all well-primed for some rip-roaring fun, starting with "I Got Rhythm," serenading seductively through "Embraceable You" and "Night and Day," and finishing big (though somewhat curiously) with "Strike Up the Band!" TheÂ energetic and bouncyÂ last number was also performed as an encore.Â I was up for even more.

Both organizations exemplify what is best about Northern California's rich musical community. The level of talent is world-class, but the attitude is distinctly hip and American. That may explain why both longtime local groups keep on growing throughout the years, and also why they make such a good partnership when they jam together.

New Century Chamber Orchestra bids farewell to Nadja Salerno-Sonnenberg and celebrates its 25th Anniversary season with a festival of concerts coming up on May 16, 18 & 20. Info: NCCO.org.