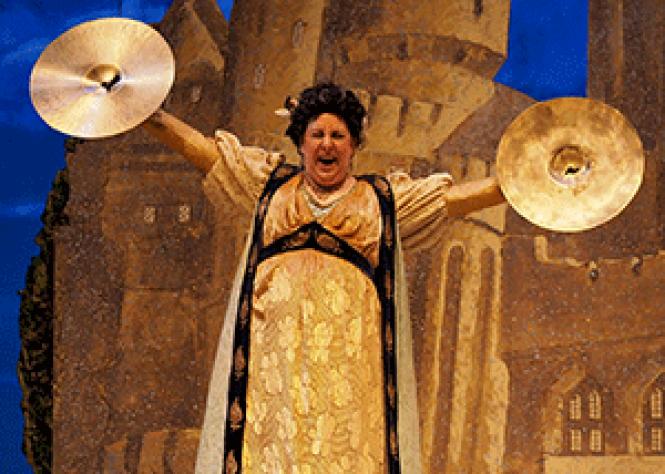 Sonia Gariaeff as The Lady Jane in the Lamplighters' Patience, or, Bunthorne's Bride (double-cast with Anne Hubble). Photo: David Allen

There's a point midway in Act I of the San Francisco Lamplighters' latest production of Gilbert & Sullivan's Patience when the Officers of the Dragoon Guards, observing the shenanigans of their formerly betrothed ladies â€" new devotees of an aesthetic cult â€" robustly sing, "Now, is not this ridiculous, and is not this preposterous?"

And they are absolutely right, but in the topsy-turvy world of G&S, that's more or less the point, and their swooning, Pre-Raphaelite ex-girlfriends will need some masculine concessions to art and poetry before they may be won again. Undeniably quaint, Patience is, to some, indicative of all that can be annoying about the famous Victorian theatrical partnership. Characters are absurdly shallow, lovers are wooed at first sight, and there is another ageing mezzo-soprano battle-axe, an air-headed soprano with an obstinate streak, and a chorus of bumbling males and swooning females, all hitting their stereotypically comic marks.

That's the story, and they're sticking to it, though to legions of fans, it endures as a happy, winning formula. If Patience is rather less timely to today's audiences than others in the canon, it still enjoys some of Arthur Sullivan's loveliest music and W.S. Gilbert's cleverest words. Maybe that's why veteran Lamplighters stage director Barbara Heroux has waited until now to finally include Patience, Or, Bunthorne's Bride as the final operetta to crown her career staging the complete works. She might have been daunted by the challenge of bringing the conflict between two poets from the claustrophobic hot-house of Victorian London into the withering glare of 21st-century society. She decides to play it straight. Narcissism is still very much alive, and cynical bids for popularity will always be ripe for satire. Heroux allows the audience to make their own parallels. Selfie-addicts take note!

Reginald Bunthorne (A Fleshly Poet) is obviously fashioned after Oscar Wilde, and his competitor Archibald Grosvenor (An Idyllic Poet) is also inspired by different aspects of well-known aesthetes, including Swinburne, artists Whistler and Rossetti, and Wilde himself. Oscar Wilde was one of the first artists to manipulate the media, creating a fashionable brand well before he made his mark with essays, witticisms and arch comedies of manners. Gilbert lampoons him less harshly than more vicious critics of the day. In Patience, Bunthorne is fairly sympathetic, just a guy who really craves attention. The aesthetic movement itself is treated as a more-or-less harmless pop phenomenon.

The leading roles for the Lamplighters production, which opened last week at the Yerba Buena Center for the Arts, are double-cast. After years of trusting the beloved Company with the Savoy legacy, I'm reporting on the opening-night cast, assuming their alternates to be equally talented.

In the title role, soprano Ellen Leslie (alternate Jennifer Mitchell) is as pretty and stubborn a Dairy Maid as anyone could wish, amusingly repulsed by the advances of effete Bunthorne, and awed by the godlike grace of Grosvenor.

Chris Uzelac (alternate F. Lawrence Ewing) is very funny as the poet who cannot help performing a fraud to get a little action and fame. Uzelac slinks and sulks, strikes attitudes, and sings with a fine sense of comic timing.

His rival Grosvenor is portrayed by Jacob Botha (alternate Samuel Faustine). Looking suitably superb in one of wig-and-hair designer Kerry Rider-Kuhn's excellent mops (her work is on fabulous display throughout the cast), Botha makes an impressive Lamplighters debut. When he changes from vain poseur to regular guy, we can appreciate his ardent performance even more.

Colonel Calverley is portrayed by William Neely (alternate Charles Martin) with less pomposity and more sympathy than expected, and it makes his every appearance a delight. When he tears through the patter songs he is not only intelligible, but warmly enjoyable. With the help of supertitles we don't miss a word, and Stephen Sondheim himself would laugh out loud.

The "rugged bosom" of The Lady Jane is wonderfully displayed by Lamplighters stalwart Sonia Gariaeff (alternate Anne Hubble). Her pitiable unrequited love for Bunthorne could be cringe-worthy, but she makes a meal of her many humorous appearances, and we are glad she makes a better catch with the Lieut. Duke of Dunstable (a solid Taylor Rawley) by the Finale.

As always, production values are high, and costumer Miriam Lewis executes the brilliant and beautiful designs of Melissa Wortman with gorgeous detail. From the first tableau, the audience knows they are in for a visual treat with the scenic design of Peter Crompton and effective lighting by Ellen Brooks making a sumptuous impression.

The Chorus of Rapturous Maidens and Officers of the Dragoon Guards sound as good as they look, and Heroux allows them individual personal details.

From the pit Music Director/Conductor David Moschler leads the wonderful Lamplighters orchestra in a fizzing performance. Many conductors pace Sullivan too carefully. Moschler trusts his musicians and puts the light touch back in light opera.

When preparing to direct a stage revival of The Pirates of Penzance, film director and noted G&S fan Mike Leigh said, "It ain't Chekhov, but it's good fun." The same couldÂ be said of Patience. We need every smile we can get.