Inspired portrayal of a gay 'Champion' 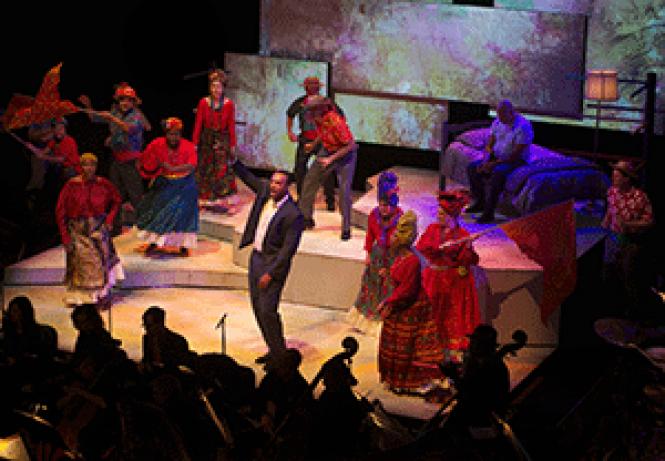 With a libretto by Pulitzer Prize-winning playwright Michael Cristofer and substantial re-working of the original material since the premiere in Saint Louis in 2013, Champion seems to satisfy what modern audiences (and critics) are looking for in new opera. Relevance is tantamount to success, and a story that can touch us on so many levels of intellect and emotion is close to ideal. There are some problems with the dramaturgy, as the whole saga is enacted in a series of sometimes superficial flashbacks, but the sum of Blanchard's musical fusion is enigmatically and gut-wrenchingly human.

From hard-luck beginnings in the U.S. Virgin Islands, after being dumped by his wayward single mother Griffith moved to working in a hat factory, where he was discovered by the owner (a former amateur boxer) and groomed for prizefighting. As his abilities grew and fame followed, the young man also had to grapple with the knowledge of his bisexuality. Fighting professionally and personally in a savagely macho world led him to the seedy underside of 1960s Times Square gay bars.

Griffith married, and adopted his wife's daughter, but he also couldn't deny his attraction to men, and considering the times and circumstances, he was headed for trouble. Even today, the world of sports (hey, let's just make that the world) is pretty rough on homosexuals. In Griffith's day, you could not only be ostracized, but also brutalized by an ignorant society unwilling to comprehend individuality.

In a notorious incident in 1962, after being called maricon by his opponent Benny Paret and slapped on his backside at the weigh-ins before their match, Griffith translated his embarrassment to raw anger. In the 12th round of the bout, Paret was cornered and the Cuban champion offered no defense as Griffith threw 17 right uppercuts to his face in a matter of seconds. The force of the blows sent Paret into a fatal coma.

His death sent Griffith into a downward cycle of estrangement from family and friends, increasingly dangerous secret sexual hook-ups, and a gay-bashing that left him physically broken, exacerbating the severe dementia pugilistica syndrome he acquired after years in the ring. Until his own death in 2013, the essentially sweet-natured and confused man was left to agonize over killing Paret and the cruelties he committed with the women in his life. His adopted son and caretaker Luis Rodrigo Griffith (a sturdy performance by Andres Ramirez) was thankfully with him to the end. He managed to arrange his father's communication with Benny Paret's son and helped achieve a kind of forgiveness, if not closure.

Those are the facts of Griffith's life, and Michael Cristofer has only shortened or slightly changed them in his episodic and vivid libretto. He has been extraordinarily successful in some scenes, but less so in others. The words can often approach banality, and his structuring of the drama leads to a top-heavy and contrived second act. There are big arias for important characters too late in the action. Just when you think the show is ending, it gets back up for another bout of emotional handwringing.

Blanchard has mostly surmounted these problems with a score that fuses jazz and classical idioms excitingly with joyous Caribbean soul and the rhythm of the streets.

A jazz trio is set within a full orchestra (nearly 30 players), and Blanchard's strong melodies swell from the pit, expertly conducted by Opera Parallele Artistic Director Nicole Paiement. They provide a lush carpet to support the steady stream of arioso , traditional arias, duets, trios, and choral scenes. It works best when the characters are freed from the bustling staging and simply allowed to lay their souls bare within a more intimate orchestration. Okay, now you has jazz!

We are not faulting Stage Director (Parallele's Creative Director) Brian Staufenbiel or choreographer Joe Orrach for framing the action with so much detail and visual appeal. Or maybe we are, because the sheer entertainment value of the crowd scenes and the solo dancing, not to mention the colorful costumes by Christine Crook and projections (media design) by David Murakami, sometimes detract from a serious depth of meaning.

The superb cast of principals includes a familiar face from many new operas. Baritone Robert Orth essays the role of Emile's trainer Howie with conviction and warmth. His angry and remorseful aria is a pillar of the action in Act II.

Karen Slack as Emile's hoydenish mother Emelda also gets plenty of solo turns, and her powerful aria of self-explanation and sorrow, with only bass accompaniment, is a stunner in the second half.

Smaller parts are well-portrayed by Chabrelle Williams as Emile's wife; Michelle Rice as the kinda creepy gay bar owner Kathy; and Aisha Campbell as sadistic Cousin Blanche. The Chorus of Reporters, Carnival Paraders, and Boxing Fans makes quick changes with seamless speed, and adds touches of individuality to their many appearances.

The biggest takeaway of the night and the strongest testament to Blanchard's success is an ultimate melancholy understanding of what Griffith (paraphrasing slightly) once said himself: "I kill a man, and most people understand and forgive me. I love a man, and this is an unforgiveable sin." Terence Blanchard has seen that Emile Griffith gets his title of Champion restored.