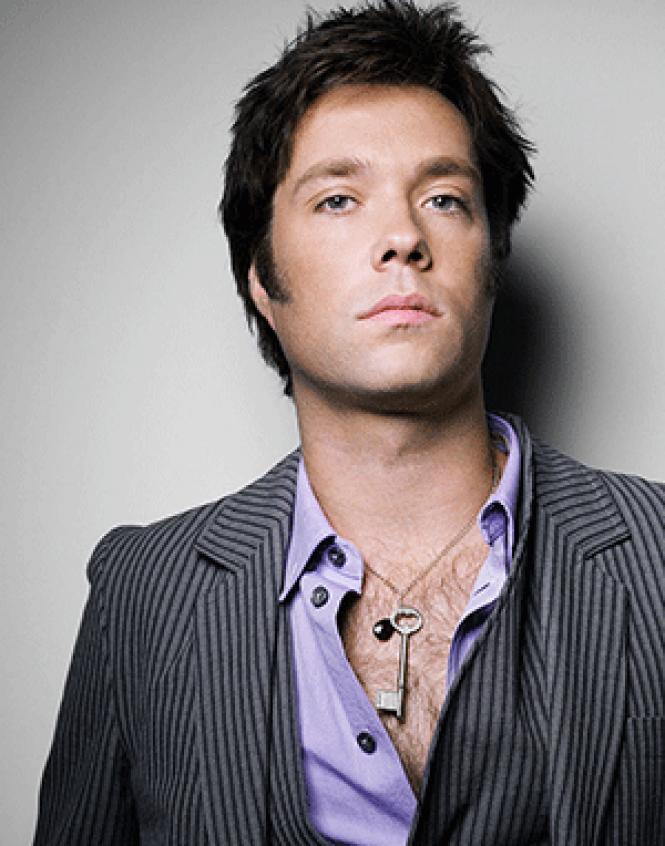 Rufus Wainwright: "I think that vanity has its
perks."

Rufus Wainwright has long been one of the most open and out recording artists, surely benefiting from the groundwork laid by queer forebears such as Elton John, George Michael and Neil Tennant. His talented family tree, including his late mother Kate McGarrigle and his father Loudon Wainwright III, as well as aunts Anna McGarrigle and Sloan Wainwright, and sisters Martha Wainwright and Lucy Wainwright Roche, also contributed considerably.

The handsome deluxe edition of Vibrate: The Best of Rufus Wainwright (Interscope/Geffen/Decca/UMe) consists of 34 tracks covering the period from Wainwright's 1998 eponymous debut through 2012's Out of the Game. It excludes 2010's All Days Are Nights: Songs for Lulu . There are two new songs, including the marvelous "Me and Liza," and live recordings. Wainwright's legendary recording of Leonard Cohen's "Hallelujah" is present, although his own "Gay Messiah" is absent. More of Rufus in a live setting can also be found on the new Live from the Artists Den (UMe/Artists Den) album and separate DVD. I spoke with Wainwright about his new releases and upcoming projects.

Gregg Shapiro: In the liner notes for the deluxe edition of Vibrate, you express your gratitude to those who actually purchase the CD, which you describe as "an act that in this day and age has become wholly altruistic," describing yourself as an "avowed album guy." With the revival of vinyl, do you think album guys and girls will be making a comeback?

Rufus Wainwright: I've definitely heard the news that vinyl is on the rise again. I don't think it will ever regain the prominence that it once held. But it's promising, I guess. I like vinyl for the sound, but also my face looks bigger on the cover!

You're flooding the market with the release of the different editions of Vibrate and the Live from the Artists Den CD and Blu-ray. What was the thought behind that?

I don't know how much thought there was behind that. What's going on is that I'm at the end of my record contract with Universal. I'm about to embark on a new opera about Hadrian, and I'm in the process of raising money to make my next album, which is a recording of Prima Donna , my first opera. I felt like in this interlude period it was good to clean house and be retrospective about my career, so I could figure out how to move forward. I'm 40 and I have another 40 years to go!

Was it a daunting task to compile songs for Vibrate?

I enlisted the help of my friend Neil Tennant from the Pet Shop Boys. I asked him to do the first round. I really feel like he has the perfect balance between pop culture and highbrow entertainment. He did the first list, then I tinkered with it, and we came up with what we have today. I thought it was important that it could be given to a complete unknown, who had no sense of what I do at all, and can then become acquainted with my vast repertoire!

You have been a familiar voice on movie soundtracks since the late 1990s, with your version of "Hallelujah" from Shrek becoming an instant classic.

That song has always been a golden thorn in my side. Because on one hand, even [the song's writer] Leonard [Cohen] says it's overplayed and over-covered, although I was one of the early people to present it. That being said, people love it all over the world. There's always a reaction, and there's a kind of lift in the room when I sing it. You can't really shoot that down when you're a struggling musician. I'm really thankful for the song. It definitely took a period of frustration to get to the peaceful acceptance that I'm at now!

There are two studio versions of "Cigarettes and Chocolate Milk," from Poses, one of which features a beat box.

The one on Vibrate and at the beginning of Poses is really the ultimate version, the classic long version. The second one was more something to present to radio, a little more palatable for the everyday listener. I went with the tough material as usual.

There are new compositions "Me and Liza" and "Chic and Pointless" on Vibrate.

"Me and Liza" is a playful ode to an American legend, Miss Liza Minnelli, who I sort of know, in a sense. We know of each other. We have yet to really bond properly. But we have been whizzing around the same universe for a while. The second one, "Chic and Pointless," is about a bad review I got from The New York Times .

"Cigarettes and Chocolate Milk" seems to be custom-made for Liza. Wouldn't it be great if she covered it?

That would be great. But I wouldn't hold my breath.

You have a history of live recordings, beginning with the Live at the Fillmore DVD on Want Two, Rufus Does Judy , and Milwaukee at Last . Vibrate also contains live tracks, and Live from the Artists Den is also a live recording.

I'm particularly proud of the live recordings on the deluxe edition of Vibrate. I've always had an interesting voice, but it has taken years to refine it into the instrument it is today. I feel like those live recordings are very much a testament to that, to a lot of hard work. I think live recordings matter the most for a singer. There's something palpable about it that you can't get in the studio.

Before launching into "Out of the Game," you don a mask of Helena Bonham Carter, who appeared in the video. As you say in the liner notes, you like costumes. Is this something that started in childhood or later, and do you think you'll ever lose your love for dressing up?

It's something that started in childhood. I was pretty obsessed with The Wizard of Oz, either dressing up like Dorothy when it was a good day, or the Wicked Witch when I was in a bad mood. I think that vanity has its perks. It's good for show business. You like looking at yourself in the mirror, therefore you can change clothes a lot! You might as well let the public in to that wonderful experience.

Will the tour dates that you are doing be structured like a live Vibrate set?

It's quite loose. It's just me alone at the piano and with a guitar. I think my sister Lucy Wainwright Roche will be with me. I even sing some new material to whet people's appetites. On the one hand, it's to go over the material and have a fun, intimate evening. But it's also, I have to be honest, to make some good money! When I'm alone, I do significantly better. I have to write this next opera, which is basically a financial nightmare.