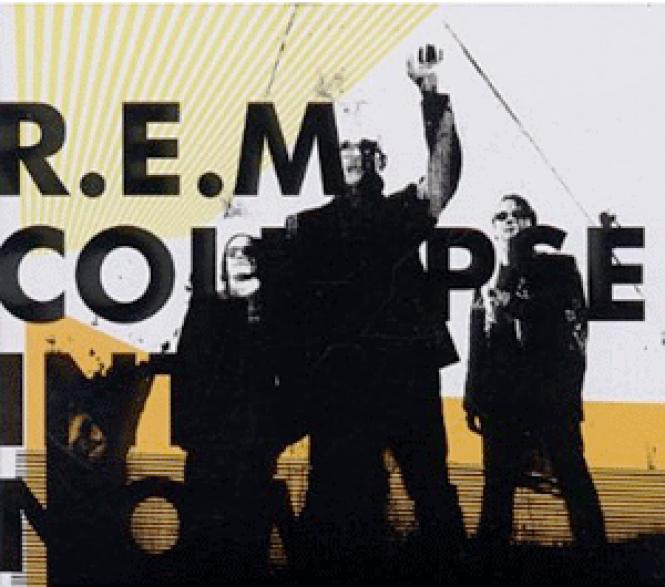 When Michael Stipe of college rock gods R.E.M. came out, he joined the ranks of other luminaries such as Husker Du's Bob Mould and Grant Hart, and American Music Club's Mark Eitzel, as gay men fronting rock bands. Guess what? It didn't have any effect on R.E.M.'s popularity or creativity. With the 25th anniversary of the band's Life's Rich Pageant disc on the horizon, R.E.M. takes a disappointing step backwards with Collapse Into Now (Warner Brothers). After the energetic and engaging return of Accelerate, Collapse Into Now isn't as lifeless as Around the Sun or Up, but it's a long way from Automatic for the People. Darkly rocking opener "Discoverer" has a vaguely familiar ring, "All the Best" maintains the mood, then the band shifts into acoustic gear for "†berlin" and "Oh My Heart." Since we already know that R.E.M. is as comfortable rocking out as they are mellowing out, the disappointment comes in not learning anything else. There is no new ground being broken. But what sets the album apart from previous R.E.M. releases is the array of guest artists. Out Hidden Cameras frontman Joel Gibb joins Eddie Vedder on "It Happened Today." That's queer diva Peaches on "Alligator_Aviator_Autopilot_Antimatter," and the iconic Patti Smith can be heard on "Discoverer" and the mostly spoken-word track "Blue."

Like Lance Bass of boy band NSYNC, Jonathan Knight of New Kids on the Block also came out as gay. Now teamed up with Backstreet Boys, the New Kids, now known as NKOTB, are touring as a boys-to-men co-headlining musical group. The album NKOTBSB (Columbia/Jive/Legacy) makes the merger complete, with five NKOTB hits ("Step by Step," "You Got It (The Right Stuff)," "Please Don't Go Girl," "Hangin' Tough" and "I'll Be Loving You") alternating with those by BSB ("I Want It that Way," "Everybody (Backstreet's Back)," "As Long As You Love Me," "Larger than Life" and "Quit Playing Games"). The most remarkable thing is the way a few of the older NKOTB tracks hold up better than the more recent ones by BSB. Further cementing the partnership are new NKOTBSB collaborations "All in my Head" and "Don't Turn Out the Lights."

Credited to k.d. lang and the Siss Boom Bang, the joyous Sing It Loud (Nonesuch) finds the out diva fronting her first official band since the late Reclines. As a musical unit, they sound spectacular, providing the marvelous material with a solid backbone. There's a contemporary vintage vibe to the sexy opener "I Confess," in which lang offers to "be your daddy." The modern retro style continues on "A Sleep with No Dreaming" and "The Water's Edge." Exceptional tunes are the electrically charged "Sugar Buzz" and the psychedelic twang of "Habit of Mind."

Leisha Hailey (Alice from The L Word ) and lang were a couple when Leisha was in the duo the Murmurs ("You Suck," "I'm a Mess"). In fact, lang co-produced the Murmurs' second album, Pristine Smut. Hailey must like being in a duo because her latest musical configuration, the electronic Uh Huh Her, consists of Hailey and Camila Grey. While we wait patiently for Nocturnes, Uh Huh Her's new full-length release, we have the six-song EP Black and Blue (Plaid) to hold us over.

Leave it to the amazing Brandi Carlile to record a live album as unique as Live at Benaroya Hall with the Seattle Symphony (Columbia). Bracketed by Elton John ("Sixty Years On") and Leonard Cohen ("Hallelujah") covers, and featuring a reading of Simon & Garfunkel's "The Sounds of Silence," the concert recording features belter Carlile performing her country-rock tunes backed by her band and a symphony orchestra to great effect. Signature songs "Looking Out" and "Before It Breaks" gain vigor and emotional impact in this setting. Even if you are not a fan of live albums, this is a must. You won't regret it.

As if the TV show Glee weren't gay enough for you, Glee: the Music presents The Warblers (Columbia), is an all-male (!) affair, featuring lovebirds Kurt (Chris Colfer) and Blaine (Darren Criss).   Actually, it's Criss who dominates, singing the lead on "Teenage Dream" (and making the Katy Perry song far less cloying), "Bills, Bills, Bills," "Silly Love Songs," "Somewhere Only We Know," and daring to take on Streisand on "What Kind of Fool." Openly gay Colfer solos on the Beatles' "Blackbird" and duets with Criss on "Candles" and "Animal."

Pianist and composer Fred Hersch is one of the three best-known, greatly admired, openly gay contemporary jazz musicians (along with Gary Burton and Andy Bey). His studio recordings, particularly those from his 90s Nonesuch period, are among the most highly regarded in the genre. Documenting the second solo piano gig Hersch played at the legendary Village Vanguard in NYC, the live recording Alone at the Vanguard (Palmetto) is culled from the dozen sets he performed over the course of six nights in 2005.  In addition to stellar renditions of "In the Wee Small Hours of the Morning," Eubie Blake's "Memories of You" and Thelonious Monk's "Work," Hersch performs sensational originals.

Now in his sixth decade of recording, vibes mastermind Gary Burton returns with his first studio album in six years, Common Ground (Mack Avenue). With the New Gary Burton Quartet (Scott Colley on bass, Julian Lage on guitar, and Antonio Sanchez on drums), the focus is firmly on Burton's magnificent mallet work, which comes through loud and clear on the title number as well as "Never The Same Way," "Did You Get It?" and "In Your Quiet Place."