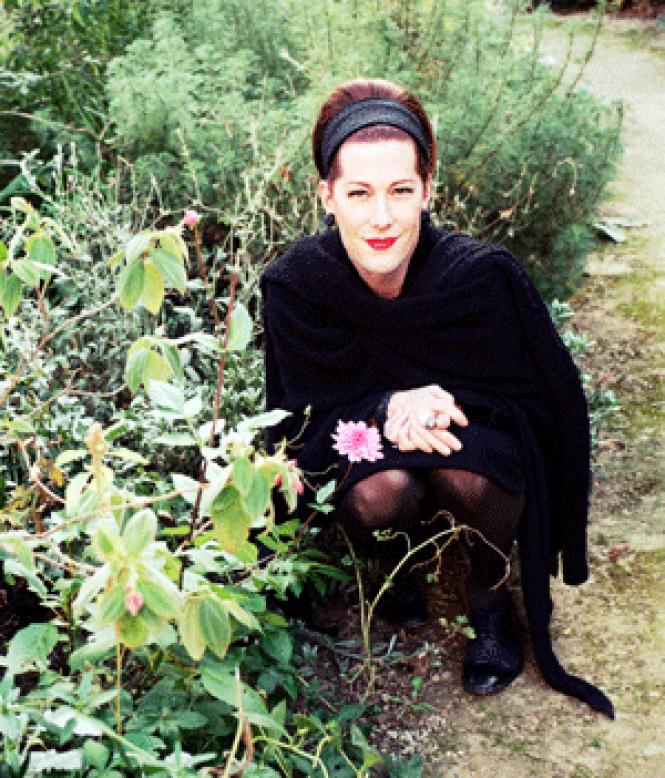 "My ideal listener is someone who's smoked a little pot and is playing dress-up in their room, getting ready to go out." – Justin Bond.

It's balmy, almost sweltering in my Market Street flat, not a breeze stirring as I dial up Justin Vivian Bond, cabaret artist extraordinaire who, as we speak, is standing on the corner of Fifth Avenue and 19th Street, late on a cold, drizzly Manhattan afternoon.

As I rhapsodize about our little heat wave, Justin cries out, "Don't rub it in. I just hope it lasts until I can get there." Proclaimed "the best cabaret artist of his generation" by New Yorker critic Hilton Als, Bond is doing his second live show in a year at the Castro Theatre (Saturday, April 9 at 8 p.m.), again produced by Marc Huestis, this time a live concert in celebration of his first full-length solo CD, Dendrophile.

Bond admits that cutting a record is a whole new experience, one that never seemed quite the appropriate medium for his previous incarnation as the saloon singer way past her prime Kiki DuRane, one-half of the Kiki and Herb lounge act that brought fame and a Tony nomination for himself and musician partner Kenny Mellman.

"I wasn't into the idea of Kiki and Herb being recording artists, so we did one Christmas record and we had our Carnegie Hall CD. I never went into the studio as Kiki because that was intended to be a live experience.

"When people see my shows, a lot of them say, ÔWell, we just feel that we're in your living room.' That's because I'm very intimate, very conversational. I wanted to make the record seem intimate, so it's very quiet, it's not like I'm doing a show, I'm just singing these beautiful songs for people."

"In America I place my ring on your cock where it belongs./ No horseman bearing terror, no soldiers of doom will swoop in and sweep us apart."

Bond says, "I've never been a huge proponent of marriage, so I can't wait until marriage is legal, so I can go back to not caring about it anymore."

David Lamble: How would you describe your voice? It's not a traditional one, not even for cabaret, but it really works well for a wide range of material.

Justin Bond: I'd like to think that it's a voice that conveys the life I've lived. I was trained for musical theatre, but I wasn't ultimately very interested in musical theatre. I have always loved cabaret, and my voice is just another way of expressing who I am.

These things develop a life of their own, don't they, without necessarily involving conscious effort.

Cabaret is more vital these days, but still you have to keep reinventing it. It does seem to hang on with a new generation of artists, just when you think it's caput it sort of bounces back.

Cabaret by its very nature is not supposed to remain the same. That's what killed it, when people tried to make cabaret be something about nostalgia. Cabaret originates in Switzerland and Germany in the beginning of the last century as a sort of political form. It was intimate, in small rooms, it's about an audience coalescing about ideas. Then it became very stylish and stylized in the middle of the last century, and made itself irrelevant.

Cabaret evolves – it's there when people need it and when artists decide to express themselves in an original way: it's very, very big in the UK right now. Time Out London just did a cabaret issue, and they had 10 different covers with 10 different artists in one week. And I do think it's flourishing in San Francisco, it's just that it's not in the traditional venues. There are so many great young queer performers doing off-the-wall things in smaller venues, in people's homes, and in their lofts and on the street.

There's not much difference between punk performance and cabaret if they're done right. I went to a performance that was under a freeway overpass in the East Bay that had a lot of young queer bands, which I consider a kind of cabaret-type scenario the way they were presenting themselves. It's very underground, but I think it exists.

Now, the Castro Theatre, where you'll be performing, is not exactly our Radio City Music Hall, but it appears to be tilting towards live performance and away from movies, just the way Radio City did. Talk about performing at the Castro.

I think it's a real tribute to what Marc Huestis has done there. Hilton Als sent me a link to a recording of Sylvester and Martha Wash singing at the Castro in the 70s. Hilton said when he talked to Martha Wash about the performance she said they were terrified that the balcony was going to collapse because the audience was going crazy. I'm so happy to be a part of the Castro's ongoing live-performance history.

Justin Vivian Bond: celebrated chanteuse returns to Feinstein's at the Nikko
Sign up!